It’s winter as of my writing this, which means I’m spending every waking moment not involving my bathroom needs smack in front of a nice warm vent.

Big ‘BUT’ here—just because I’m cold-blooded like a crocodile doesn’t mean I want to have their same kind of skin. So it’s not unusual for me to turn to the very thick, very sealing, very thick (it bears repeating) charms of Jamaican black castor oil to help me stay soft and healthy during the chilly months. The good people at Sunny Isle JBCO have always done right by me product-wise, so when they announced their Pure Butter line, I got my little grabby hands on a jar of the lavender variety. I waited for it to get cold again, and now that it is, I can give this goop an honest, unadulterated review!

So how’s it stack up?

It’s petty to focus on looks right out of the gate, but as both a branding/packaging geek and a glasses-wearer, a distinct appearance in my products is actually pretty important. I know that not everyone is as visually-impaired as yours truly, but I do appreciate that I can tell what this product is from across the room. The glass container is also a big plus for me, although I wouldn’t blame them for shifting to a lighter recyclable plastic in the future. I feel like a full jar at my bedside could replace my machete for dealing with home intruders if I really needed it to! More than that though, I just love how glass feels in my hand. Arbitrary, yes, but it’s still true. 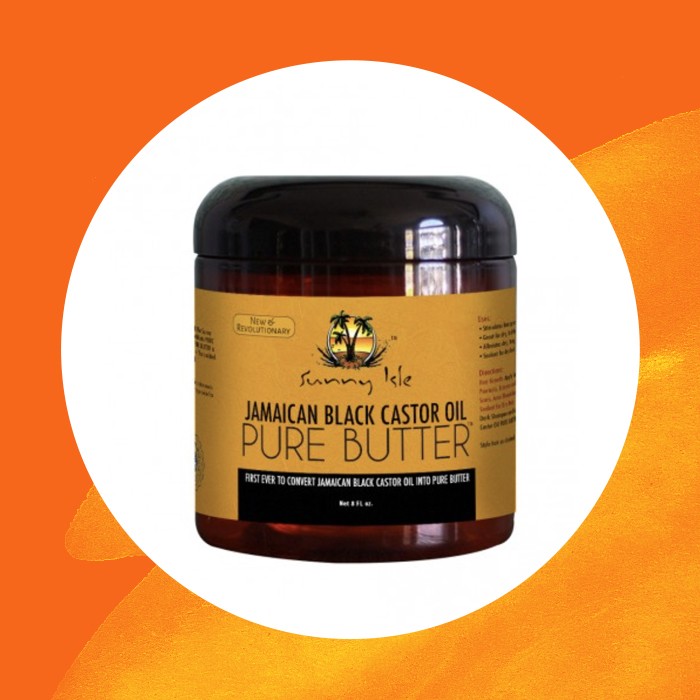 Okay, what about the product itself?

First off, I have no idea how this “butterfication” was done, but it was, and I’m kind of in awe. Sure, every carrier oil I can think of will solidify with enough exposure to the cold, and even liquid JBCO naturally has the consistency of syrup on ice. Still, when I first heard of the product, I kind of assumed that Sunny Isle added something to keep it as thick as it is. This grayish, translucent product looks and feels like a cross between the fat you have to scrape out when you slow-cook a pot roast and the blue pressing oil of my youth. Unsurprisingly for this brand though, the listed ingredients on my bottle are simply “Ricinis Communis (Castor Seed) Oil, Lavender Essential Oil”. Not even an ‘and’. Now that’s breaking things down to their essentials…

The lavender blends well with the rich nutty smell of the castor oil, but if you’re a stickler for light, flowery scents, this might not be for you. The smell isn’t musky, but it is still very earthy; in fact, I’d even go as far as to call it unisex. If we were going from a masculine to feminine scale with Idris Elba and Lupita Nyong’o at opposite ends, this would land in the middle, right around Queen Latifah as she appeared in ‘Set it Off’.

How I used it:

Scalp treatment - I give this an A+! It goes on just like the good stuff mom used to use on me, and my scalp is soothed and happy. It’s easily spread with a finger, but you can still feel that it’s doing its job, and because it’s so heavy the results last. My new growth feels less ‘crunchy’ already!

Hair sealant - I’m also happy with this particular usage! I used this after my leave-in, before I put my hair back into box braids the week of writing this review, and applied it down my curls section by section as I pre-twisted it. I’m happy to report that even my (sigh) damaged ends felt very moisturized and much softer with the butter in them, and even though I know there’s no such thing as saving them with any product, I’m feeling more confident. I’ll say this though — my hair’s super power is its porosity. And even though it sucks up everything I put on it, my curls were still just a little ‘tacky’ feeling after application. I’m not sure I’d recommend this for curlies and coilies with low-porosity hair; it’s probably going to weigh your strands down, and then you’ll be all greasy and mad at me. No one wants that, right?

All-over moisturizer - Okay, this actually didn’t even get out of the gate. Because this stuff is so very very VERY dense, I barely had the patience to finish one of my calves before I called it quits. This isn’t going to replace my whipped shea and mango butters for after-shower moisturizing; simply put, it’s just too much effort to work it into large areas of my body.

Spot treatment - I don’t have any diagnosed skin conditions, but I’m only human (mostly) so I get ashy joints. On my elbows, knees, the rims of my nostrils, and my feet, this has been perfect. I’m also set on buying the unscented variety for use by my kitchen sink once I’m finished with this container. Using this butter post-dishwashing didn’t even leave my hands enough time to figure out they’d been almost literally boiling for the last quarter-hour, and I appreciate that.

It’s the best...in small doses. Now you can never have too much of a good thing, only too little storage for it. But because this butter is so rich and difficult to spread, there’s really no practical way to use it as anything more than in smaller portions. Bonus though, that means that one jar is going to last a good while! I say go for it.

Is castor butter something you’d consider?

Let us know, and keep your H2O on the inside in these cold months!