My Curly Hair Was Holding Me Back at Work 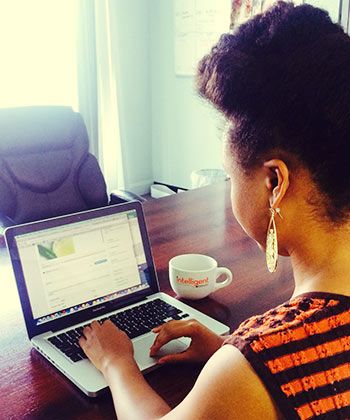 When I first went natural I was terrified of going out into the world with my new hair. It was my own hair but there was no straightening, wig, or weave to cover my curly texture.

It was just me.

I was received with welcome arms from most, but I did notice the silent stares by others. Despite that, I can honestly say I was treated no differently. Then, I switched jobs and it was like going from day to night. My immediate supervisor (who did not hire me, by the way) made it known that she did not like my curly/coily hair. The few times I would straighten my hair she would shower me with “ooohs” and “ahhhs” and “it’s so pretty this way.”

The last time I wore it straight to the office, she went so far to say, “it’s professional when you wear it straight and you should keep it this way.” I was stunned, infuriated, and high-tailed it to the ladies room to ruin my style with water and my spray bottle. Needless to say, it was the beginning of the end for that job and yes, there were other problems but the main problem was me not being accepted as me.

My story is far from an anomaly. I have heard of curly-haired women being told they would not be taken seriously with curly hair. I've also heard of students at colleges being told they would have to straighten their hair to land a job and natural-hair women being told their hair was nappy and inappropriate at work or school. It’s appalling and downright offensive since none of those instances required a particular hairstyle for those women to perform their jobs well.It’s unfortunate that some companies, professionals, or individuals feel that straight hair on a woman is considered professional. They feel that straight-hair employees will be seen as serious, job-worthy, and smarter. So, what does that say about all curly-headed employees? It says just the opposite.

Curly hair is fun, cute, fashionable, and flirty. It’s how you wear your hair for your wedding, prom, and even your gym ID. This long-standing categorization of hairstyles is an outdated one. Just as the baseless saying “blondes have more fun” needs to be retired, the negative curly-hair classification needs to disappear as well.

When it comes to afro-texture hair, women are being deemed unprofessional or even worse…intimidating and threatening. Despite how shallow and unfounded these labels are, it does not change the fact that some women are being treated unfairly due to their hair textures.

What You Can Do About It

I’m tired of the stories I read online and hear in conversations about curly-hair women who have fallen victim to scrutiny. It’s not fair and yes, I’m aware life is not fair but to value a person according to the way their hair curls has to change. Now, there are some women who fall victim to their own self-inflicted insecurities and I have personally witnessed many black women suffer from this affliction. Feeling that even stepping out of their perception of professionalism is not worth the negative backlash. Well, I say step out because if you do your job, handle your business, and are professional, not only will you excel but you will be setting an example that may reshape the perceptions of those around you.

Your hair has nothing to do with it. There are natural and curly-hair anchorwomen, judges, and attorneys. There are curly and natural-hair doctors, teachers, and civil servants. They exist and we just need to support them. Every job has an HR department so it may be time for a sit down if a curly-hair or natural-hair woman feels heat from a supervisor or co-worker about her hair. It may be a hard walk to take, but the problem is with them and not you. Don’t allow someone else’s perception of you to define you or hold you back. And don't allow others to belittle the issue with the “it’s only hair" comment. That is precisely the point.