A Day in the Life: Denis DaSilva of Devachan Salon

A Day in the Life

This is the second in an ongoing series of features about some of the top curl stylists. We take you behind the chair to experience a day in their life. This month, we get up close and personal with Denis DaSilva, co-owner and master Stylist of Devachan Salon and Departure Lounge, a growing chain of salons catering to the world’s curlies. 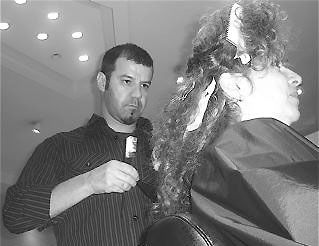 Denis DaSilva has the gift of gab. But unlike some stylists who overindulge in chatter, the co-owner and master stylist of Devachan Salon reveals his charm in peekaboo moments. Mostly, he appears unassuming, focused and nearly obsessive about precision. Even with an assistant always at the ready, he unconsciously glances at his watch in five-minute intervals. On this chilly winter morning, it's just after 11 a.m. on a Friday, and DaSilva is mixing color for two clients while responding to a phone message.

"Tell him to call me in exactly 10 minutes, no sooner, no later, please," he says.

The phone rings constantly for him on this December day. DaSilva not only manages more than 90 employees, he is in the midst of a new product launch and a second salon opening in White Plains, a New York City suburb. His attention is captured in moments. Right now, he focuses on a client who chose blonde highlights and another curly who drove in from Long Island for DaSilva’s color expertise.

Devachan salon is also the home of Deva products, which are among curlies' favorites!

"That's the most stressful part of the business, doing color," he tells me. "You really need to hear what the client is saying and understand it because one word could mean many things."

Within 10 minutes, the call he's expecting is back on hold. He slips away to take it, then sneaks in a few nibbles of a berry-bran muffin. Within minutes, he's back to his clients.

"One day the master will be born, but he's not born yet," he replies, appearing almost uncomfortable with the praise.

Despite his self-deprecating talk, DaSilva exudes a quiet confidence that commands his clients' trust. His cautious demeanor comes from decades of experience with finicky clientele. Just when you make one client happy, another strolls in with a dilemma.

The sister-in-law of the client from Long Island arrives. She also has an appointment with Denis for color.

"My hair's a mess," she says with a sigh. "I have to tell you the color was too light last time." Of course, she asked for a blonder look at the time, DaSilva later tells me, but he says nothing about that to her today. Instead, he indulges her grievance and offers a solution.

Meanwhile, his assistant finishes styling the previous client who received blonde highlights. She quickly walks over to DaSilva: "I just want to say thanks a million! It's absolutely perfect."

"Some of our clients come from far away and they expect the best," DaSilva tells me, "So the pressure is on, whether we like it or not."

Thankfully, he thrives under pressure because the salon sends all the difficult or unhappy clients straight to him. "Tough clients make you a better professional," DaSilva says. "When you please them, they stay with you for life. The easy clients are willing to go somewhere else."

A mother (also a long-time client) walks in with her daughter for the teen's first haircut with DaSilva.

"Tell him what you want and then do what he says. I've learned the hard way," she tells her daughter, with a wink.

"When was your last haircut?" DaSilva asks the teen with all-one-length honey curls hanging to her waist.

"Well, we're going to bring the length up a bit, and don't worry, it will be pain-free," he says, smiling.

Once that cut is complete, it's back to the client who came in with a grievance. The plan is to tone down her color with a combination of low-lites and highlights.

"I'm going to do what I think is best for you and you can give me your input," he tells her. "I don't want to make it too dark because then you'll say 'Oh no, I'm a brunette.'"

"The toner will bring her down a shade and a half," he explains to me.

Trying to stave off hunger, DaSilva slips to the back for more nibbles of the same muffin. On this day, he's too busy even for his usual sushi lunch: a salmon roll.

"I have the same thing every day because I don't want to think about what I'm going to eat," he says.

Meanwhile, another client arrives, this time a Brazilian woman who chats with him in their native Portuguese. For her, he touches up the roots and adds highlights.

Then, it's back to the teen with honey-colored curls for some finishing snips on her new 'do.

"It looks absolutely beautiful," the mom says to her daughter.

Next up, a new client. "Nice to meet you," DaSilva tells the brunette curly. "So, talk to me. How can I help you... (pause) with your hair, of course," he says with a touch of humor.

"My sister got the best haircut by you and that's why I'm here."

They discuss a few details of the cut. DaSilva shapes her mocha-colored curls to allow the movement she's looking for, then his assistant takes her back for cleansing and styling.

The verdict is in from the long-time client who wanted a color adjustment, claiming her curly locks were “too light” after her last visit. Today, she emerges with a swirl of caramel and honey-kissed curls. She makes a thorough inspection in the mirror.

"Much better," she says of the color.

After she leaves (happy), DaSilva scurries to the back room to check the schedule of his remaining clients. "I'm very much behind," he says. Just one late client can throw off the entire day — and today a particularly impatient client just arrived. DaSilva has styled her textured tresses for nearly a dozen years. He knows she won't wait quietly.

"I'll be with you shortly," DaSilva says.

"Really, how long?" she says, with an obvious hint of frustration.

"About two hours," he deadpans.

"Well, I have to get somewhere, so seriously, how long do you think you'll be?"

He manages to soothe her irritation long enough to go back to his chair and start on the client scheduled before her. A 20-something woman with dirty blonde waves says she's ready for a change— even though she already mixes up her style, going from curly to straight and back again.

"How are you going to wear your hair today?" he asks.

"Well, it's raining outside," she says, and then changes the subject: "I feel like my hair is getting thinner, like baby hair."

"I think you spend too many hours in the mirror," he says, poker-faced. "Your hair is not getting thinner. You'll have to wait about 50 years for that."

She chuckles and rolls her eyes, her body language shifting in and out of sarcasm. Their camaraderie is endearing. Like many successful stylists, DaSilva is able to adapt quickly to the many personalities he encounters in the salon.

DaSilva asks his assistant to check on the new client who should be styled and ready by now. Meanwhile, he steps away for a minute to finish the last bites of that same bran muffin he started eating five hours ago. The new client is back in his chair for a few of DaSilva's final snips and, voila! She's done.

"Amazing," she says, ever so matter-of-factly, confirming her expectations were met. "Love it. Just love it."

Comforting praise like that helps DaSilva remain passionate about an industry he first entered as a teenager. Still, he never takes the accolades for granted. He knows he must earn each and every one, with every cut, and every new client.