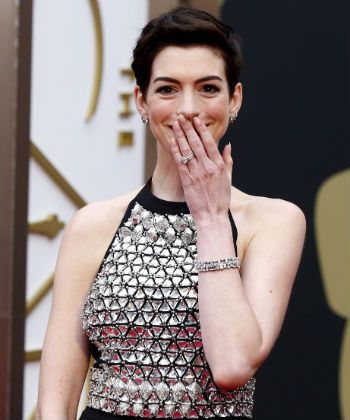 Why isn't Anne Hathaway favorable to the general public? According to the actress, it's because of her pin-straight hair. Say what now?!

A slew of articles have been written about Anne and the lack of interest that both ordinary, everyday people as well as the acting community have for her--The New York Times, The New Yorker, and CNN are just to name a few.

Recently at a red carpet event covered by E! News, the Rio 2 actress came to the conclusion that her short, straight pixie cut is the reason people don't like her.

"I'm very, very luck to have very straight hair...Everybody hates me, it's fine, I'm used to it!" boasts the actress, with a pearly white smile full of cockiness. Actor and 2011 Oscar co-star James Franco claims Hathaway has "Hathahaters," and it's a known thing around Hollywood that "Everyone sort of hates Anne Hathaway."

What does the curly community think of Anne Hathaway? Do we wish we could have her type 1 hair? I personally think her preference is just that--hers. She was gorgeous rocking a faux curly, frizzy 'do in The Princess Diaries, and she's just as beautiful with a short, straight pixie cut. My one piece of advice for her, however, is to not single us curlies out and immediately assume that we hate you because we want your hair. Just my guess, but it likely has something to do with your ego trip.

Watch the video here, and let us know what you think about Anne Hathaway and her hair!