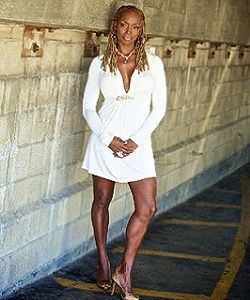 I LOVE VH1's "Basketball Wives!" I sit and watch in amusement and sometimes horror as these ladies go about their day to day lives dodging gossip and accusation like bullets. Anyway, one afternoon while tuning in to the first episode of "Basketball Wives LA," I caught a glimpse of a stunning bronzed woman with blond locs, piercing eyes and the most luminescent complexion I'd ever seen. It looked like she literally glowed! I was taken by her style and her "I am too grown and too fabulous for the cattiness and the fighting" attitude. She became my favorite, but then she wasn't in any more episodes!

Last week, I got the opportunity to interview Tanya Young Williams and found her to be just as delightful as I imagined. We talked about her projects, her charity works and projects, her hair, and her time on the show. Read on!

Tanya Young Williams On the Couch

About being the celebrity spokesperson for the National Domestic Violence Hotline:

I had the opportunity to go on the CBS Early Show and actually offered commentary on Mel Gibson and his alleged domestic violence. Having a history of dealing with domestic violence, the producer said, "You really should align yourself with the National Domestic Violence Hotline so that your voice and message can empower others."

After a year and a half of communication, they asked me if I would be a celebrity spokesperson. I felt that would be the greatest opportunity because the more people you can help with your story, the more lives you can possibly save and the more family dynamics can be improved.

Her advice for women who may be in abusive relationship: 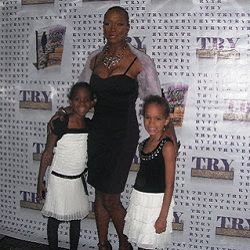 If you're in a situation where a person makes you feel less than yourself, that's not good. Love doesn't hurt. If you are in an abusive relationship, it's important that you have a friend that you can trust completely to talk to. It's important to have that support system and someone that you can talk to and be 100 percent comfortable with. Also, you have got to have an exit strategy. Where can you go if things get very bad? Is there a safe place for the children? Do you have any money put away? Everything is about strategy when you are ready to get out of an abusive relationship. Also, call the National Domestic Violence Abuse Hotline for help. The number is 1-800-799-SAFE.

About her book, "I'm Tired! Carry Your Own S#!t (Oops, I Mean Bags) A 7 Day Journey to Peace, Passion and Purpose":

It's a self help book for people who have been carrying other peoples baggage for so long, that they have forgotten about their own passions and their own purpose. It's a workbook and an easy read. You actually go through seven days of asking yourself questions that you've probably forgotten the answers to: Who were you when you were happy? Who were you when you weren't stressing and carrying other peoples baggage? Essentially, what baggage are you carrying that doesn't belong to yourself? This workbook is very dear to me, I am very passionate about it and anyone who has read it and has responded to me has said that it has helped change their life. I believe that each of us was created for a specific/unique purpose, and the goal of this book is to allow you to tap back into your God given purpose for your life. Love yourself enough to buy the book because it will change your life.

About her hair journey:

I've actually been natural for many, many years, but have worn my hair in the dreads style for eight years. My hair before that was just wavy. During the early 80s, I was an athlete and I was getting it wrapped. But you know what that's like, I'd get my hair wrapped, and the second I'd run up and down the floor, I would perspire and my hair would revert to being wavy again!

At some point, I believe I was in college, I said, "You know what, I can't do this anymore." At the end of the day, I couldn't keep my hair the way I wanted it to look, so I had to change and say, "Enough with the wrapping." The thing is, I didn't want to have a perm, and there was a period of time where people were doing a thing called texturizing. I would texturize it to make it straight, and then I would wrap it and I thought it looked fabulous! But, if it rained, or I perspired, I was done, so two and a half hours in the salon was wasted!

It wasn't easy! My hair is naturally wavy and curly, so me wanting to have locs was not easy, but it's still something I like! Because my hair was thinner, when I started twisting it, it became heavier and took on a fuller look. It's just something I like! I use Aubrey Organics products as well as Kiehl's Care products. Another thing that I do is apply vitamin E to my scalp.

About her daughters (Tryumph 8 and Whizdom 7) and how she cares for their natural curls: 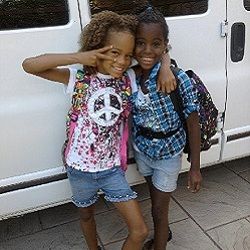 Both of my daughters have wavy/curly hair like mine. I am very fortunate to have two very good girls, but the only time we don't get along is in the morning when I'm combing their hair [laughs]. "Mommy, are you hurting us on purpose? No, I'm just combing through your curls!"

When I was younger, my mother would put Johnson and Johnson No More Tangles in a jar with this very heavy cream called Baby Cream, and she'd shake it up! So of course, years later, we're laughing like, "She was making Carefree Curl Moisturizer before it even came out!" But as moms, you continue to test and see what works in your childrens' hair. I laugh because my mother did it when we were little, and that was just what mothers do. Even with my two girl's hair, I've gone through so many different products to find out what works best for them. It's really tough to find products for children's hair that is curly, not coarse.

My favorite product to use is Aubrey Organics B5 Design Gel. I am trying to find other products though. I have been having a difficult time finding things that will not weigh down their hair — others are too fragrant. Maybe your readers will have some suggestions!

On that gorgeous glow and fit physique:

On what she expected when she joined the cast of the "Basketball Wives of LA":

When I met the producers, we talked about focusing on the lives of basketball wives as moms and business women. Though it's glamorous, there's more to being a basketball wife.

On whether or not she was accurately portrayed on the show:

I actually only watched the first show and haven't watched since, so I honestly don't know how I was portrayed.

On her absence from the reunion show and whose idea was it for her to not be included:

Both myself and VH1 decided that it would be best if I was not a part of the reunion. It was a mutual and amicable decision.

Do you communicate with anyone from the show?

I talk to Jackie about business and I also talk to Imani on Twitter.

On whether she'll be returning for another season:

No, I have other projects going on right now. I am a Legal analyst for KTLA, write for the Huffington Post, and am a Celebrity Spokesperson for the National Domestic Violence Hotline. It was in the best interest of all involved that I did not return.

Check out CurlyNikki's natural hair challenge to Derek J — and what he says about it!

Don't be bummed, though dolls! Even though she won't be returning to the BBWLA cast, she promises that she'll be back on the small screen in due time! At the end of our interview, I promised Ms. Tanya that I would send out an APB on product recommendations for her two beautiful daughters. They need products that will moisturize, but not weight down the hair. Also, what products would you all recommend for effective detangling?