Didn't we just have this conversation last week? Or was it the week before? Anyways, apparently the UK mags didn't listen when Solange said "don't touch my hair," and decided to touch another Queen's royal coils. But Lupita Nyong'o did not come to play. 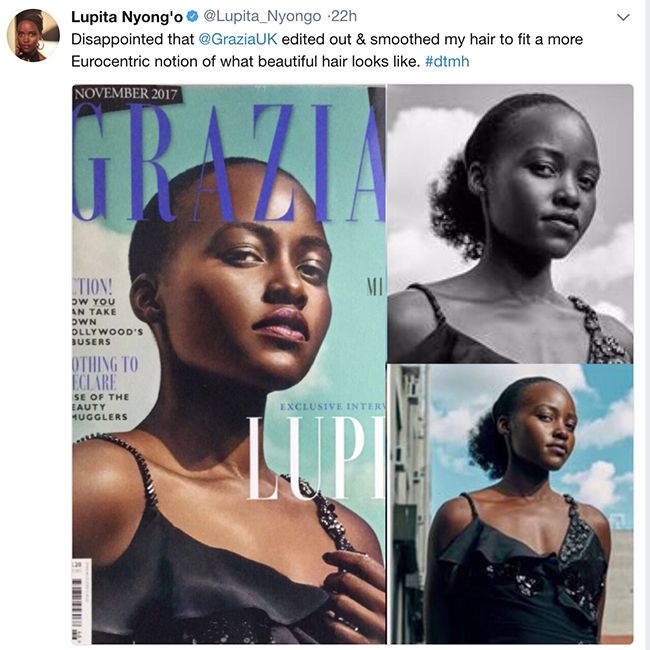 Last week after yet another magazine conjured up their "digital scissors" to alter the image of a Black woman, Lupita took to social media to say this,

As I have made clear so often in the past with every fiber of my being, I embrace my natural heritage and despite having grown up thinking light skin and straight, silky hair were the standards of beauty, I now know that my dark skin and kinky, coily hair are beautiful too.

Being featured on the cover of a magazine fulfills me as it is an opportunity to show other dark, kinky-haired people, and particularly our children, that they are beautiful just the way they are.

I am disappointed that @graziauk invited me to be on their cover and then edited out and smoothed my hair to fit their notion of what beautiful hair looks like. Had I been consulted, I would have explained that I cannot support or condone the omission of what is my native heritage with the intention that they appreciate that there is still a very long way to go to combat the unconscious prejudice against black women's complexion, hair style and texture.

According to a set of images shared by Lupita on Instagram and Twitter, her hair was actually styled in a pulled back afro ponytail for the photo shoot.

The Oscar-winning actress Lupita Nyong'o has notoriously used her platform to advocate for Black representation and to acknowledge the beauty of Blackness in all of its facets. She has also been open in sharing her struggles on the journey to self-love, "I remember a time when I too felt unbeautiful. I put on the TV and only saw pale skin. I got teased and taunted about my night-shaded skin" she recalled in a speech delivered at the 2014 Black Women in Hollywood Luncheon.

I remember a time when I too felt unbeautiful. I put on the TV and only saw pale skin. I got teased and taunted about my night-shaded skin

This speech later went viral, and was an ode to Black women across the world that despite the hegemonic standards of femininity and eurocentric ideals of beauty embedded in Hollywood and society; that we are here, and our dark skin, coily hair, big lips, and differences are all a part of what makes us beautiful.

Unfortunately, three years later and mainstream beauty standards have yet to make any great strides, especially when it comes to images of Black women rocking their natural hair. In fact, this is just one of several incidents this year where Black hair has been heavily surveilled. NaturallyCurly editor April just wrote an article about the London Evening Standard magazine that was forced to apologize to Solange last month for removing a significant portion of her hair from their October cover issue. The month before, Nicki Minaj called out the double standard Black women face in magazines where their hair is altered in ways that their white counterparts are not. "For years, fashion mags would change my hair for their covers but allow women of a diff race to wear the exact style on the cover," she said on Twitter.

So what is this persistent and infuriating obsession with "fixing" Black hair and why do these mistakes continue to happen? I'd be remiss to argue that this is just ignorance or an oversight by magazines. There is something about a Black woman's hair that makes society uncomfortable, something about it that they think won't sell magazines. And while these setbacks are evidence that we have a long way to go when it comes to combating hair discrimination and acceptance, women like Solange, Lupita, and all of you out there rocking your own natural hair are essential in the changing tide. We are a part of a revolution whether we want to be or not, and every time we walk out the door with our coils, curls, puffs, and braids we are forcefully challenging these mainstream ideals.

At the end of Lupita's speech in 2014 there was an analogy she shared from her mother that stuck with me, "You can't eat beauty. It doesn't feed you." With this she meant that beauty is not something that you can make or in her words, "consume," rather it is something you have to just be. So I hope after these embarrassing affronts to Black hair, magazines will allow our hair to do just that, be.