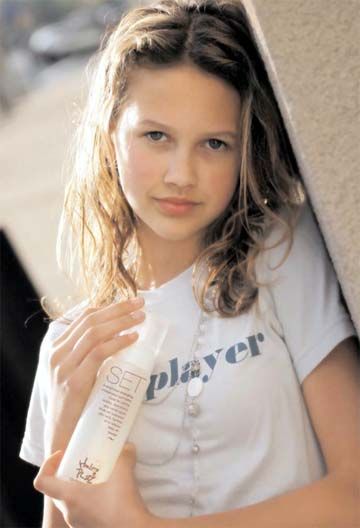 There was a time when setting lotion was an invaluable tool in the arsenal of every hair stylist.

With the wide variety of mousses, creams, gels, waxes and pomades now on the market, setting lotion has gotten lost in the shuffle. That's why Fritz Clay created his Hairplay Set, a line of setting lotions. These weightless foaming products provide flexible hold for all hair textures.

He spent four years developing his product line, which includes four versions. The Light hold formula works best when blow-drying, flat-ironing, or when for a polished natural look. The Medium hold is for dense, frizzy, wavy/curly hair. Extra Set is for the most challenging unruly curly hair. There also is a Light Fine variety for people with fine hair. Clay also created Seal to give the hair shine without being oily and heavy.

A native of San Francisco, Clay began cutting hair in junior high school. He was inspired by his godmother, Bessie Hawkins, who was barber instructor. He would go with her to trade shows and classes, where he was fascinated by what he saw.

"I'm a look-and-learn type of guy," Clay says. "I felt like 'I can cut hair.' Being the convincing Leo that I am, I started by cutting my friends' hair, and I got better and better at it. "

By age 14, he was cutting the hair of both his friends and their moms, and had a nice little business going.

Then he lost interest in it, instead spending a year in business college.

"I missed cutting hair," he says

Sensing her godson was in a rut, Hawkins took him to lunch and introduced him to the owner of her barber college. She offered to pay for his tuition, and he signed on.

"She didn't strong arm me, telling me it would be something good to fall back on," he recalls. "The more involved I got, the more empowered I felt."

Twenty years later, Clay has no intention of getting out of the hair business. After working with one of San Francisco's most prestigious stylists, he opened his own salon 14 years ago. Hair Play now has two locations. During his career, he has built a reputation for innovative work in both the fashion and entertainment industries. Clay has worked as an educator and platform artist for such companies as KMS and Redken, and is a national award-winning stylist.

"I've been doing hair so long that I've gone through different stages—master stylist, creative director, designer, etc.," he says. "Now I'm back to being a simple hairdresser with a lot of knowledge to give the professional and the consumer."

From the beginning, Clay -- who is biracial -- has specialized in coarse, kinky and curly hair. Hair Play is a multicultural hair mecca, where stylists are equally adept at turning out a head full of dreads or a sleek blowout. When hiring new stylists, Clay says they must understand curly and kinky hair, even if they don't work with those hair types on a regular basis. Eight of his 26 stylists are experts in these hair types.

Clay understands curly hair first hand. His own hair went from wavy to frizzy and curly when he hit puberty.

For 12 years, he had dreadlocks, cutting them off a year ago. It was when he cut his curls that he discovered the benefits of setting lotion for curls.

"I never really thought about using it to control curly hair," Clay says. "But I found the products I was using were either oily or crunchy."

He put setting lotion on his hair with the intention of blowing it out. But he got busy with clients. When he looked in the mirror, he was thrilled with how good his curls looked.

"It was different then I'd ever seen it," Clay says. "I started wearing like that all the time."

So he created his own line of setting lotions.

"I'm so proud of it," he says. "I want to run up to people I see with curly hair and give them all bottles of Set!"