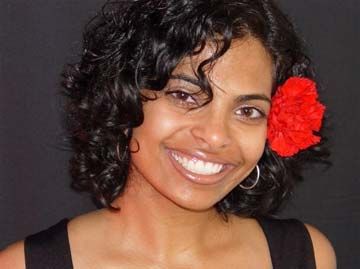 Like many women with curls, Zenda Sims faced a daily dilemma.

After years of straightening her hair, she had decided to go curly. But living in New York and working in the finance industry, she led a busy life. But she had no time to air dry her hair, no time to diffuse, and regular towels caused her hair to frizz.

"So I began experimenting," Sims recalls.

While there were several microfiber towels on the market, she felt wanted to create something just for women with waves, curls and kinks. Using herself as a guinea pig, she tried out different designs and fabrics - adding length and changing the weave.

Three years later, she introduced the Curl-Ease towel - a highly absorbent towel that wicks water away from the hair while reducing frizz and defining curls. The lightweight towel dries hair quickly and eliminates the need for hair diffusers and dryers. The towel sells for $25.

"It's extremely lightweight and easy to wrap around your head," Sims says. "It's also very, very absorbent. It totally enhances the natural shape of the hair. Finally there's something that caters to us besides a flat iron or a hair dryer."

Zenda's Tips for Perfect Curls: Gently squeeze excess water from hair. Lean head forward, wrap Curl-Ease tightly against head and tuck into itself. Remove after 15-20 minutes, depending on length and thickness of hair. Shake out hair, use favorite hair products to style hair and you're ready to go!

Sims says she's thrilled that she created a product that makes life easier for curly women, especially since she fought her own hair for years.

"My mom didn't know what to do with it," Sims says. "She'd say 'Your hair is a mess. Go brush it.' Then it would turn into a monster pile of frizz."

She was a slave to her flatiron. But three years ago, a hairdresser alerted her to the damage daily heat styling had done to her hair. So she went curly. Curl-Ease, she says, has made her own life easier.

And the towels quickly have become a staple for other curlies since she began selling them in December.

NaturallyCurly.com member Shonta Newnham, (CurlTalker "CurlyNight"), says she was initially a cynic, especially because of the higher cost of Curl-Ease compared to other microfiber towels.

"I didn't think it would work when I saw it was essentially like a thin cotton cloth, but it does!" Newnham says. "It dries my hair faster. And due to how thin it is, it makes plopping easier too."

Newnham says she likes it better than any microfiber towel because it's smooth and thin, without rough edges.

"Curls/waves don't loosen up or get frizzy since there are no rough edges in it," she says. "While quite pricey, I like it a lot better than any microfiber towel."

Susan Shay is also a fan of Curl-ease.

"After trying, and giving up on, a few curly hair products, I have found Curl-Ease to be the best solution for me," Shay says.