The 2017 SAG Awards Speeches Gave Us the Hope We Needed

Bedazzled with just the right amount of passionate, elegant, and insightful deliveries, many of the 2017 SAG Awards speeches sent an electrifying chill through everyone watching. 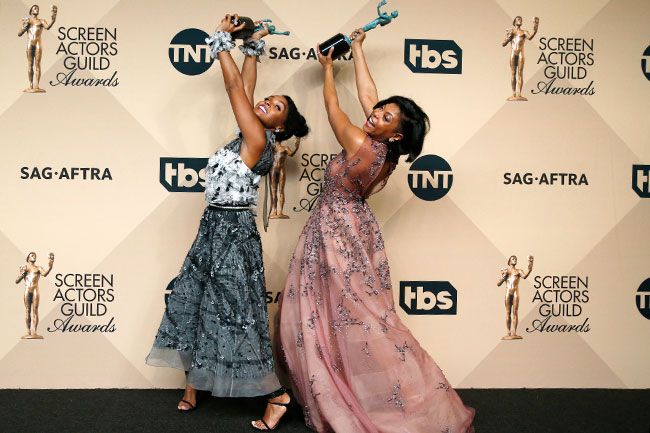 Say goodbye to the era of mediocre award show speeches.

Following a momentous, awe-inspiring Golden Globes speech given by Meryl Streep just a few weeks ago while accepting the 2016 Cecil B. Demille honor, last night's Screen Actors Guild (SAG) Award winners received their trophies while staring deeply into the teleprompters in solidarity of opposition to President Donald Trump's latest co-sign: an executive order to close off United States borders to seven largely Muslim countries. Bedazzled with just the right amount of passionate, elegant, and insightful deliveries, many of the 2017 SAG Awards speeches sent an electrifying chill through everyone watching. Don't believe me? Watch some of my favorite speeches below and try not to drop a tear or feel a tug at your own sense of pride, morals--and humanity.

The Stranger Things cast accepted their Best Television Show honor by way of actor David K. Harbour, who took the opportunity to do...

"...a call to arms from our fellow craftsmen and women, to go deeper, and through our art to battle against fear, self-centeredness and exclusivity, and through our craft to cultivate a more empathetic and understanding society by revealing intimate truths that serve as a forceful reminder to folks that when they feel broken, and afraid, and tired, they are not alone. We are united, in that we are all human beings, and we are all together on his horrible, painful, joyous, exciting and mysterious ride that is being alive. Now, as we act in the continuing narrative of Stranger Things, we 1983 Midwesterners will repel bullies, we will shelter freaks and outcasts, those who have no home, we will get past the lies, we will hunt monsters, and when we are at a loss amidst the hypocrisy and the casual violence of certain individuals and institutions, we will, as per chief Jim Hopper, punch some people in the face when they seek to destroy the meek and the disenfranchised and the marginalized."

He then concluded with a message to the fans and viewers:

"Thank-you for the responsibility."

After gracing the stage for a Best Female Actor in a Comedy win, Julia Louis-Dreyfus reminded us that, like most first-generation immigrants, she has been deeply affected by the horrors already being enacted on U.S. citizens by the Trump administration:

"I want you all to know that I am the daughter of an immigrant. My father fled religious persecution in Nazi-occupied France, and I am an American patriot, and I love this country, and because I love this country I am horrified by its blemishes. This immigrant ban is a blemish, and it is un-American..."

Julia, who is also a member of Sister guild WGA, took this time to also recite their anti-immigrant ban statement.

"Our guilds are unions of storytellers...who wish to share their creativity with America. We are grateful for them. We stand with them, and we will fight for them."

As if the words 'groundbreaking' and 'record-breaking' did not already come to mind when Fences actress Viola Davis gets brought up, without a doubt, they should from here on out. Last night Viola became the first black woman to win five SAG Awards, and per usual, she stunned with her acceptance speech while receiving the honor for Outstanding Performance by a Female Actor.

"They say that maybe all one could hope for is the right regrets. What [American playwright August Wilson] did so beautifully was [that he] honored the 'average man' who happened to be a man of color...The fact that we breathed and lived our life, and was a god to our children...just that means that we have a story and it deserves to be told. We deserve to be...in the center of any narrative that's written out there."

The cast of Hidden Figures gave fellow actors and movie-goers a hopeful outlook on the power of unity with a stunning speech led by actress Taraji P. Henson.

“This film is about unity...The shoulders of the women that we stand on are three American heroes: Katherine Johnson, Dorothy Vaughan and Mary Jackson. Without them, we would not know how to reach the stars. These women did not complain about the problems, the circumstances, the issues... They focused on solutions. Therefore, these brave women helped put men into space. This story is about what happens when we put our differences aside, and we come together as a human race. We win. Love wins every time...They are hidden figures no more!”

Mahershala Ali accepted his award for Male Actor in a Supporting Role for his work in Moonlight. During his speech, the actor recalled his own realization years ago of how religious ignorance has the potential to play a dangerous role in forming unnecessary division.

"I think what I've learned from working on Moonlight is we see what happens when we persecute people. They fold into themselves, and what I was so grateful about in having the opportunity to play [his Moonlight character] Juan was playing a gentleman. Who saw a young man folding into himself as the result of the persecution of his community, and taking the opportunity to uplift him, tell him that he mattered, that he was okay, accept him and I hope that we do a better job of that. When we get caught up in the minutiae, the details that make us all different, there's two ways of seeing that. You can see the texture of that person, the qualities that make them unique, or you can go to war about it, say, 'That person is different from me, I don't like you, so let's battle.' My mother is an ordained minister, I'm a Muslim. She didn't do backflips when I called her to tell her I converted 17 years ago. But I tell you now, we put things to the side, I'm able to see her, she's able to see me, we love each other, the love has grown. That stuff is minutiae. It's not that important."

Did you watch the SAG Awards last night?

If so, which speech was your favorite? Let us know on Facebook.