Erykah Badu Sees Something Good in Everyone: Including Hitler 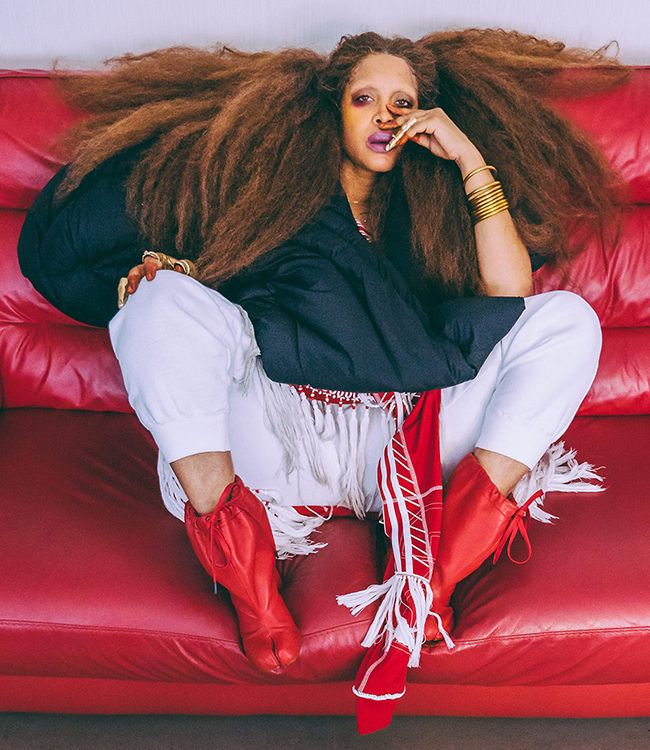 Photo by: Rondo Starr for Vulture

If "Baduizm" means empathy for Hitler, sexual assault, and staying silent on issues of injustice, then I want no part of it. Sorry Ms. Badu. In an interview with David Marchese for Vulture, Erykah Badu, 46, said, "I saw something good in Hitler... Hitler was a wonderful painter."

The interview continued to move in an odd direction when Marchese asked "what would his skill as a painter have to do with any 'good' in him?"

"Okay, he was a terrible painter. Poor thing. He had a terrible childhood. That means that when I'm looking at my daughter, Mars... I could imagine her being in someone else's home and being treated so poorly, and what that could spawn," she continued. "I see things like that. I guess it's just the Pisces in me."

After that statement, it was hard to continue reading the article and remain impartial. Before I go further into any analysis of her bizarre comments in the interview, let me make it very clear that I am (was) a Badu fan. From her musical genius and lyricism, to her style on the red carpet, including show-stopping hairstyles that often push the boundaries of what it is to be beautiful or fashionable in Hollywood, I generally ship Badu. Even after she said some controversial things in the past, I continued to root for her, I mean how many times have some of my favorite rappers said some problematic things? However, over the years Erykah Badu seems to be moving farther and farther away from the realities of being a Black woman in America. Just like skin color is a privilege, so is wealth. And wealth seems to have made Badu a bit oblivious to the issues surrounding the country and world today.

Earlier in the interview, the Neo-Soul legend refused to condemn Bill Cosby, who as you probably know, admitted to drugging and sleeping with multiple women. "Because I love Bill Cosby, and I love what he's done for the world. But if he's sick, why would I be angry with him?" she questioned. "The people who got hurt, I feel so bad for them. I want them to feel better, too. But sick people do evil things; hurt people hurt people."

My issue with her comments, which have been mirrored by some NC colleagues and around the interwebs, is that by showing empathy for these obviously vile people, she is choosing the side of the indifferent.

Erykah Badu, when you say you can see good in Hitler, just remember something... in your mind, that might seem like a real smart and nuanced point. To Holocaust survivors and their ancestors, it’s a kick in the teeth and an unnecessarily offensive thing to say.

Erykah Badu-“I see some good in a lot of people”

Me reading the interview: “Yes, I can see her point”

Erykah-“Even Hitler, He was a beautiful painter”

Me thinking: “Then why would you use him as an example?” pic.twitter.com/lWfC9VI5V5

The Erykah Badu interview in Vulture is problematic to say the least. If you're going to operate without professional PR, you need to have enough discipline to resist volunteering any opinion on Hitler.

Badu admitted that her opinions often go against mainstream beliefs, but she remained adamant throughout the interview that she was an "empath" and that her views simply reflect how she sees things.

"I'm not trying to rebel against what everybody's saying, but maybe I want to measure it," she said. "Somebody will call me and ask me to come to a march because such and such got shot. In that situation, I want to know what really happened. I'm not going to jump up and go march just because I'm green and the person who got shot is green. The rush to get mad doesn't make sense to me."

It's as if she's saying, "nothing offends me, because I have this superior ability to rise above conflict," instead of understanding that her wealth and status has afforded her some evasion of the oppressions that Black men and women face at the hands of the oppressor. It is disconcerting that Badu, a woman that so many have considered an icon and someone to look up to, would proudly dismiss the wrongdoings of these men, and other injustices, and claim it as empathy. I think her Baduizm (the way she sees things), could use some direction from one of the greatest minds of all time, James Baldwin:

"To be a Negro in this country and to be relatively conscious is to be in a rage almost all the time."

You can read her full interview with Vulture here.

Is Badu operating on a higher moral plane than us all, or has she reached the ranks of celebs like Kanye that are way too far removed from society? What are your thoughts?