How Today's College Students are Changing What "Professionalism" Looks Like 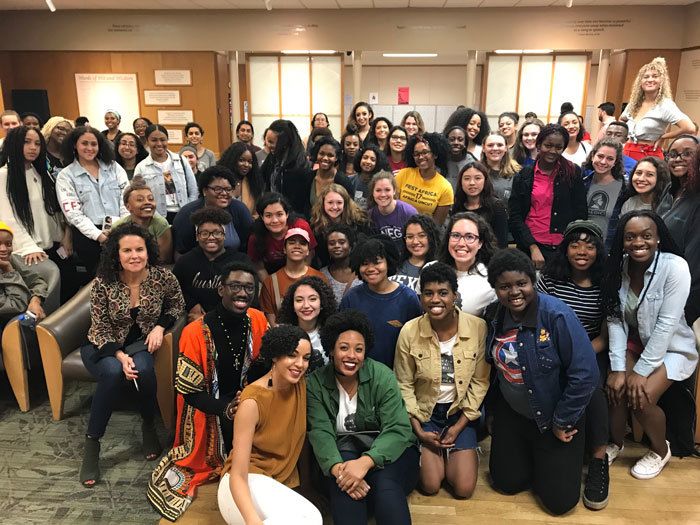 Growing up in College Station, TX, Julianna Masabni always felt out of place. "I was always the girl with the curly hair." Her hair made her stand out, and she hated that. She often woke up wanting to shave off her curls. People had come to associate her with her hair, and since she viewed her hair as ugly, she thought others saw her that way too.

Then she went off to college, where again she was the girl with the curls. "But now I saw my hair in a positive way. I'm the (resident assistant) with the curly hair, and I love that."

Going off to college is a time of discovery, a chance to discover who you are. Hair – specifically curly hair – can be a big part of self image and exploration. That was the topic Thursday night at Kinsolving Dorm at the University of Texas in Austin, where a standing-room-only crowd gathered to hear a panel of curlies discuss their curls, kinks and waves.

Some of the topics were amusing, like how to deal with shedding curly hair when you share a bathroom with a bunch of other people. Others were practical, like how to find cost-effective products on a college student's budget. And some were emotional, like when Timia Bethea shared how her natural journey inspired her mother to do the same. "I realized I could make a difference in how other people see their hair."

Deanna Hausman grew up fighting her long curly hair. "Growing up, curly hair wasn't something I thought I should want. I got so much attention when I straightened my hair, so that reaffirmed that straight haired was the right way to be."

When she got to college, she realized that her constant struggle to straighten her hair was, in fact, fighting her own body. "At college, I saw other people celebrating their hair, and it changed my mindset. It became about seeing what my hair can do rather than trying to fit into other people's image."

Embracing her hair enabled to appreciate other things about herself, including her Mexican heritage.

Gerard Smithwrick grew up getting his hair cut short at the barber. That's what black men were supposed to do. "That was the ideal image of being clean, proper and put together." It wasn't until two years ago at grad school that he decided to let it grow out and see what happened.

But will that confidence follow them out of college as they move into the workforce or grad school? They expressed concerns that as the only black woman in the business school, or the only woman in her biochemistry major, or the only black person in the school of classical music, they already stand out. They are already different. So to wear their hair natural is to emphasize that difference even more, and that's not something they feel comfortable with in a professional setting.

Masabni says she was faced with self doubt as she applied to Dental Schools and once again found herself being the only curly girl in the room. "I worry when I go to school and start seeing patients, is my hair and my identity going to be the reason they don't come to me?"

When Smithwrick was applying for the job in the residence hall at the University of Texas, he didn't' know if he should keep his hair long or should cut it short again. After talking to his mentors, he cut it short. "After cutting it, my heart dropped. I didn't know who this person was. It was not Girard."

A light bulb went off. "I decided that no matter what happens next, if I cut my hair, it's because I want to cut my hair."

Smithwrick, believes this generation is pushing the envelope for change that they'll take with them from college into their professional lives. When he attends job conferences he already notices there are applicants wearing their hair natural, wearing locs, "How are they going to get a job with locs?" he mused. But he also sees the recruiters are embracing their individuality too. "This generation is going to change what professionalism looks like. We are creating a culture of self acceptance."

Did you wear your hair natural in college? Do you see the attitude towards natural hair in the workplace changing?