How Quinoa Can Stop Your Hair Color from Fading 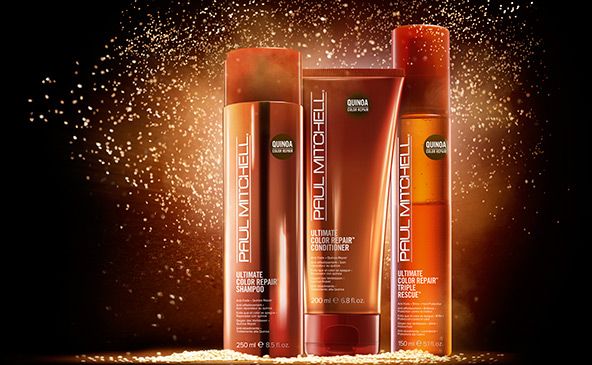 Like a chef, chemist Emily Reed from John Paul Mitchell Systems is always experimenting with new ingredients that can help solve a problem. She’s always looking for new ways to create concoctions that can bring something new and different to the haircare market.

“Nobody needs another shampoo just for the sake of having another shampoo,” says Kristin Firrell, vice president of product development for John Paul Mitchell Systems.

Paul Mitchell wanted to create a product that would help prevent the fading that comes from frequent shampooing, heat styling and the sun. So Reed said she was very intrigued in April when she started hearing a lot of buzz about quinoa, especially its potential benefits for colored hair. They had looked at a variety of different ingredients, but quinoa stood out. She got a sample within a week and began testing it. She was very excited about what she discovered.

Quinoa (Chenopodium quinoa Willd.), pronounced KEEN-WAH, which has gained popularity as a tasty super-food, has been found to have benefits for haircare. It offers a unique combination of molecular weight amino acids offering enhanced penetration for along with creating a protective barrier for greater repair, hydration, and shine.

Quinoa protein is characterized as being more like an animal protein, than a vegetable protein, due to its amino acid profile. Considered to be a complete protein, it contains all 8 of the essential amino acids with the highest level of protein among grains. High levels of Cysteine, Cystine, Lysine, Methionine, Tryptophane and Tyrosine greatly enhance its ability to assist in the repair, protection, and conditioning of both hair and skin.

Unlike the rest of the proteins that will each offer protection, repair, or moisturization, quinoa protein will offer all of these attributes through enhanced hair penetration and substantivity for increased damage repair and cuticle protection.

For those reasons, Reed said quinoa was the perfect ingredient for Ultimate Color Repair from Paul Mitchell: a three-part, sulfate-free system that locks in hair color and reverses the signs of damage. In addition to quinoa, the product also containshea butter, jojoba and soybean oil. They combine to keep color protect color up to nine weeks while protecting from thermal damage.