"With all the different cultures here, there was no place to go if you had curly hair," says Chagaris, who three months ago opened Spirals Salon in Tucson, a salon dedicated to curly hair. "Having naturally curly hair myself, I know it's so hard to find someone who understands it -- how to touch it, how to style it, how to cut it. It is very much an untapped market."

Thanks to stylists like Chagaris, it has become a growing market. 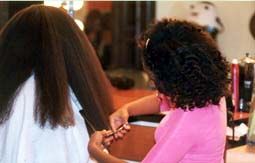 Titi of Curve specializes in curly and textured hair.

"The vast majority of the population doesn't have straight hair," says Titi of Curve Salon in Brooklyn, which specializes in curly hair. "I don't know how we've gotten along this long without more people specializing in curly hair."

Although New York has several salons focusing on curly hair, curlyheaded men and women in other parts of the country often found it more difficult to find a stylist versed in the ways of ringlets and coils. But that is changing, with salons popping up around the country that have made curly hair their priority.

In some cases, it may be one stylist within a salon who specializes in curly hair. In others, the salon may choose to be trained and certified by well-known curl experts like Ouidad, Lorraine Massey or Christo, and to carry their product lines. And in some cases, stylists are opening their own curl-centric salons, using their own experience and techniques and carrying a range of curly hair products.

These include salons like Spirals in Arizona, Batia & Aleeza in Beverly Hills, Calif. and Curl Jam in Bethesda, Md. Jonathan Torch is in the process of opening his Curly Hair Institute in Toronto. While his other salon cuts hair of all types, the Institute will concentrate on curly hair.

Toronto curl whiz Jonathan Torch is in the process of creating a curl-centric salon.

Californian Barbra Taber, who has gained a reputation as a curl guru, plans to open a salon called Ringlets in the Los Angeles area. As it is, she says, 90 percent of her clients have curly hair, some coming from far away as Chicago and New York to get one of her haircuts.

Diane Wirono, who has naturally curly hair herself, opened Curl Jam seven years ago with another stylist.

"We both have curly hair, and have both been through every trial and tribulation of working with and against our hair," she says. "Curly hair motivated us to open our shop." 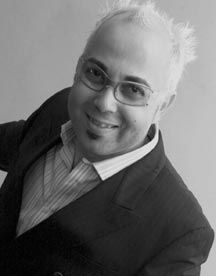 New York curlmaster long ago saw the need for a salon specializing in curls.

"The reason all these salons are specializing in curly hair is because of demand from their clients," Christo said. "In the past, people were paranoid to wear their hair curly because they thought it was out of fashion or unprofessional."

But these days, with more curls in magazines and the movies, curls have gained popularity. People want to work with their natural texture.

"Over the past five to 10 years, there's been a movement toward texture," Titi says. "People are letting their hair do what it wants to do. Before it was all about getting your hair to look stick straight. Now, it's all about encouraging the curl."

Salon owners also can see the success that curly salons have had in New York, and the popularity of curly product lines. And with a large population of people with curly or wavy hair -- people willing to spend money to make their hair look its best -- many see huge market potential.

"I think that more people have a minimum of natural wave, if not curls," says Wirona, who believes her shop's name and expertise with curls set it apart from other salons in the Bethesda area.

Jacqueline Early of J. Earleys Salon on Beacon Street in Boston got training from Ouidad and Christo, and says 50 percent of her clients have curly hair.

"I am so grateful I've had the opportunity to look at another dimension of hair," she says. "It's definitely been worth it to invest in a specialty area."

Early believes curlyheaded clients are very loyal clients when they're happy with a hairdresser. Her clients come from all around New England and the New York area.

Taber, and others who specialize in curly hair, say people with curly hair have different needs than their straight-haired counterparts.

Titi, who is half Black and half Japanese, decided to open the salon in 1997 with her sister, Miko, because of their own traumatic experiences with their curly, kinky hair.

"Going to a Japanese salon was not an option," Titi says. "And Black salons wanted to weigh it down with grease. There were no choices. Most people with curly hair just got what they could get. They'd throw a dart and hope for the best. It was always an ordeal."

She considers Curve to be a place where people can talk to people who truly understand their hair and can help provide solutions to help it look its best and offer options.

In many cases, curly clients may be leery of hairdressers. In many cases, they may have shunned salons altogether because of bad experiences.

"They're paranoid and nervous," Taber says. "Most of them are scared to death."

In many cases, they have been fighting their hair most of their life and may need to be educated in how to wear it curly. Taber recalled getting a call form a 75-year-old woman who had worn her hair in a bun most of her life. She was able to give her a curly style that worked with her hair's texture.

"When I do consultations with clients who are wavy or curly, they often don't know how to work with it," Wirona says. "They are under the misconception that if they let it dry naturally and it doesn't look good, they should blow it out. But fighting natural texture goes so much against nature."

And these salons and stylists are in it for the long term, says Diane Bailey of Tendrils Salon, a natural hair salon in Brooklyn. Bailey says people initially thought she was crazy when she decided not to use chemicals any longer in her salon since most black women wanted to straighten their hair. But as more people became aware of the options, she says her business has continued to grow.

"This isn't a trend," Bailey says. "Trends come and go. This is a life choice -- an option people are choosing."

Christo believes this proliferation of curly stylists and salons is good for everyone.

"These salons help maintain the trends of curly hair," he says. "They help people accept their hair."