Common Curly Salon Disasters—and How to Avoid Them! 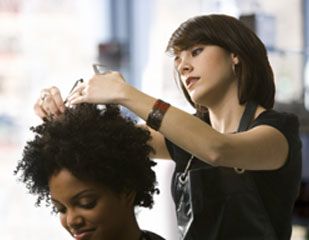 A trip to a salon can end in a disaster if you're not prepared.

Even the most heinous haircut seems to at least start with hope and a smile. But then comes the moment when excitement turns to dread. You know something is wrong, and you want to speak up, scream, run! But you don't, or can't, or won't. You feel invisibly chained to the stylist's chair as the nightmare continues on auto-pilot, until it's finally over. Why put yourself through the tress torture?

Here, we learn from curlies who endured the most common (yet disastrous) salon snafus. Find out what they learned from their mane mistakes — and how they made a curly comeback.

SALON SNAFU: You emerge with the dreaded pyramid

Like many curlies, Susan Rizk has long been on the receiving end of nightmarish haircuts. "My hair has been teased and blow-dried upside down," says Rizk of Salem, New Hampshire.

Her worst curl-crushing cut unfolded at an upscale salon five summers ago. Although she told the stylist that she had no interest in looking like a poodle, her curls were sheared into a poofy pyramid that "made my round face look rounder," Rizk says. Shocked and speechless, she left in tears.

Looking back, Rizk doesn't recall any red flags that would have warned her of the disastrous 'do. The salon was even highly recommended by her sister, although she has a "borderline straight" texture. (I can hear you now: "There's the red flag!")

Lesson Learned: Rizk is now "extremely specific" with stylists about what she wants, and offers a thorough disclaimer before the first snip.

"I've had bad experiences in the past. I just want to shape my curls," Rizk tells them now. "I don't want pyramid hair, and please don't cut more than a few millimeters off the longest layers."

Silver Lining: She eventually found a stylist who is "curl-friendly," who doesn't suggest blowouts or ask if she wants to "smooth" her hair.

"That term is so irritating," says Rizk, noting that her new stylist is a good listener and provides a great cut. As for styling? Well, that's a different story.

"I feel like curls are very picky about how you can style them, and what works for you doesn't work for me, not even a little bit," she says, "(But) as long as I get a good cut, I'm happy."

SALON SNAFU: You fall for a bait and switch 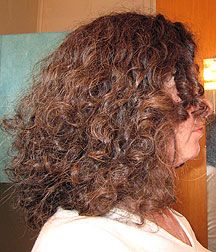 Sherri, after her disastrous hair cut.

Back in April, Sherri K. of Newark, Calif., thought she found a stylist who knew how to cut curly hair. After all, she just needed a trim.

"He said he understood the concept of the Deva cut (the Devachan Salon method of tailoring a dry cut based on individual curls) . . . and he would cut my hair dry," she says.

But the cut didn't resemble any Deva cut that Sherri had ever received. This stylist — who also had curly hair, but had it blown out that day — combed her curls with a fine-toothed comb and a silicone-based shine serum, before cutting them.

"I had no idea what he was using (at the time)," Sherri recalls. "I thought it was a conditioner."

When it was all over, nearly six inches of curls — gone! What was left? Stacked layers, resembling a misshapen bob.

"I went from a great Deva cut that just needed a little trim to a butchered head of frizzy, stacked, ugly hair," she says.

After sharing her mishap with the curly-haired manager, who was also a stylist, she fixed the shape of the cut. Still, it was too short and only time could fix that.

Lesson Learned: Sherri realizes she should have spoken up the moment the stylist tugged at her curls with a fine-toothed comb.

But she also learned it's really just hair, and it does grow back. "It's not the end of the world, even though it may feel like it at the time," she says.

Silver Lining: After a few months, Sherri again went back to the salon manager for another trim in July. This time she emerged triumphant.

"I am happy with her as a stylist, but I will never let the other guy touch my hair!" Sherri says.

When Jennifer McKevitt of Chardon, Ohio, started reading the "Curly Girl Handbook," she excitedly approached her stylist of nearly 10 years, suggesting they try some of the book's cutting methods. The know-it-all stylist dismissed McKevitt, and continued to cut the way she always had, throwing in a few snarky remarks: "No one has perfect curls, especially you," and finally, "Do I tell you how to do your job?" Ouch!

She knew the stylist was opinionated, but her strong comments were usually cushioned with humor. This time, she had gone too far, and McKevitt would not be dissuaded from trying something new. A few weeks later, she found another stylist who was trained in the method McKevitt wanted to explore. The new stylist reshaped her curls and encouraged her to grow out the canopy for better curl definition.

"She even kneeled beside me, letting me practice clipping along her part, in order to teach me how to get that much sought-after hairline volume," McKevitt says.

Lesson Learned: After years of conceding to a squawky stylist, McKevitt now holds her ground in a stylist's chair. She's "absolutely clear" about what she wants and will leave (albeit, politely) if the stylist refuses.

"I could have saved myself a lot of time and distress had I done that with my former stylist," she says. "It was a pricey lesson, both economically and personally."

Silver Lining: As her hair grew, and her curls grew more defined, McKevitt became happier than ever with her curly hair — and her new stylist. And when she ran into her former stylist around town? The snippety one, who supposedly had all the answers, actually had a few questions for a change: "Are you using a curling iron? Why is your hair so curly? Did you get a perm?" McKevitt offered simply, with a smile, "I went with that "Curly Girl" method I tried to tell you about."

SALON SNAFU: You're in a rush, and your curls pay the price 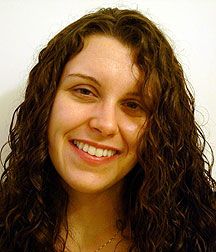 Nicole Cossman usually turns to her mom, who's a stylist, to care for her curls. But last April, Cossman found herself in a jam. She desperately needed a cut, but her mom was too busy. She decided to visit a reasonably priced chain salon instead. After all, she only needed a trim. How bad could it be? (Oh, it could be bad, real bad!)

"The woman who cut my hair complained the entire time about the tangles, the length, how it hurt her arms, and how hard it was to cut," says Cossman, of Tamarac, Fla. "I was horrified, and embarrassed by it. She also tried to thin out my hair, which has never been good for me."

With her curly tendrils in tatters, Cossman was devastated, but didn't complain to the stylist. She just never went back.

Lesson Learned: Cossman is much more cautious now when choosing a salon. She conducts research and asks a lot of questions. "I have learned a lot about caring for my hair at NaturallyCurly.com, and that's where I get my information," she says.

Silver Lining: After perusing the stylist reviews on NaturallyCurly.com, Cossman finally found a curl-centric stylist in her area that she likes.

"She was very easy-going and didn't flip out when she saw all of the curls, and very thick hair, so I knew she was a patient stylist," Cossman says.

SALON SNAFU: You ask a new stylist to duplicate a previous cut 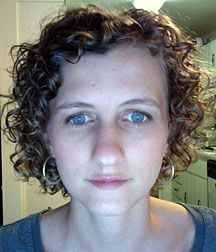 At home for her college summer break a few years ago, Nina Mulder got a great curly cut. But when she returned to school in the fall, she wanted to find a salon nearby to maintain it.

After corralling a few recommendations, she took a chance on a stylist, who Mulder says did "an acceptable job." So, when it was time for another cut, right before graduation, she went back to the stylist. This time, though, it was for more than just a little maintenance.

"Big mistake," says Mulder, who wanted the same "super cute" cut that she originally received from her hometown stylist. The problem? It was a style that hairdresser had "sort of made up as she went along." (Read: impossible to duplicate!)

"It was kind of an inverted bob with a wedge in the back," says Mulder of Denver, Colo.. "But when my new stylist tried to give me the same cut, she didn't really understand what I wanted."

The result was a wedge that it resembled a buzz cut. "I told her that I thought the back was too short," Mulder says. "She did offer to trim up the rest to blend it, but I was afraid it would look worse."

Lesson Learned: "Just because I get a good cut from a stylist once, it doesn't mean they'll deliver every time," Mulder says. "You need to be specific about what you do and don't want EVERY time you get it cut."

Silver Lining: While researching salons, Mulder found one that specializes in curly hair and also offered a link to NaturallyCurly.com on the salon's website. There were positive reviews from fellow curlies, so she went for a cut in July.

"Before anything, we talked about my hair and the problems I was having, the past experiences with stylists — what styles may or may not work out for me," Mulder says. "I now love my hair for the first time in a long time. My curly friends are jealous!"

SALON SNAFU: You try a chemical process that ends in a calamity 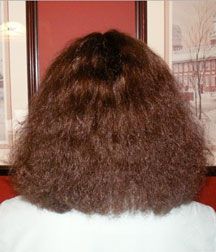 Laura Harris' hair after the treatment that left her hair a frizzy mess.

Last year was an emotionally draining one for New Jersey curly girl Laura Harris. She was navigating an awful breakup with a boyfriend, and her job wasn't any great shakes, either. She craved something to smile about, to look forward to. So when her stylist suggested what he called a "curl-reducer" chemical process that promised to zap frizz, she thought it would be the perk she needed to boost her spirits.

"Not as dramatic as a Japanese straighter, I was told it would keep the curl but just reduce the frizz," says Harris of Maplewood, NJ, noting that the product has since been discontinued. "It did the opposite. My hair looked totally fried."

The only option to improve it? Cut it off. Harris had to shear six inches, leaving her still-frizzy locks barely gracing her chin.

"The only thing I could do was blow it straight," Harris said. "So my long, beautiful curls turned into a short, frizzy, uber-ugly head of hair."

Adding hair extensions hid some of the damage that would ultimately take more than a year to recover.

"Obviously, I can’t place all the blame on my stylist," Harris acknowledges. "I made an incredibly stupid decision."

Lesson Learned: Many mistakes are simply epiphanies in disguise. For Harris, this dragged-out, harrowing experience led her to love her curls. "I’m also much less concerned about the stylist's feelings and much more open about what I want," she says.

Silver Lining: After a growing-out process that spanned a year and a half, she now embraces every textured tendril.

"I just got the extensions removed and cut off the fried hair," Harris says. "It’s shorter than my hair has ever been in my life, but I love the way the curls look now — so shiny and healthy!"