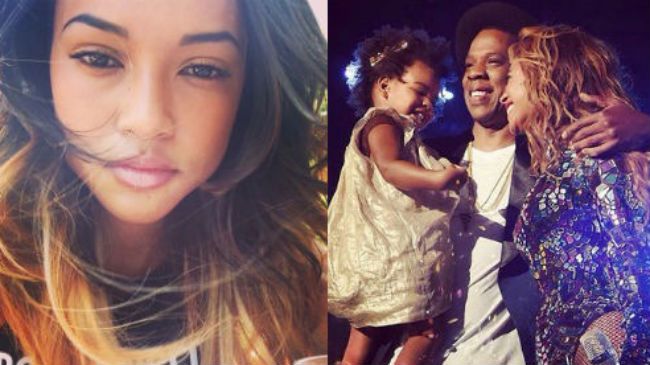 Blue Ivy Carter's hair is natural. She is a child who cannot defend herself. Oh, and her mother is singer Beyonce and her father is rapper Jay-Z, so she's basically music royalty. You'd take these facts into consideration before coming for someone, right?

Apparently that means nothing for model and longtime girlfriend of Chris Brown, Karrueche Tran.

I really did wake up like this, because my parents never comb my hair.

On BET network's 106 & Park countdown during a live taping Monday, Tran provided a Blue Ivy impersonation in a skit entitled "Top 6 Things Blue Ivy Thought At The VMAs." She said, “I really did wake up like this, because my parents never comb my hair.” This was followed by the live audience half cackling and half booing her, to which Tran bellowed, “Sorry Blue! I love you.”

Who is to blame?

According to Karrueche's team, she was informed of a script change only moments before she and her co-host went on hair, due to the timeliness of the VMAs and the producers wanting to insert the skit into the show (filmed on August 25th.) She was given the script on the scene and had no time to look over it for her better judgement--or lack thereof.

We (and the ENTIRE world) think little baby Blue Ivy was the most adorable, overjoyed little girl, cheering on her mom from the audience and later joining dad Jay-Z on stage to congratulate Beyonce with the Michael Jackson Video Vanguard Award.

Aside from us gawking at her uncanny ability to keep winning us over with any and everything--what does the Queen Bey herself think? Beyonce has yet to sound off on the constant controversy and conversation surrounding her daughter's natural hair.

BET's commercials and campaigns often provide uplifting messages and products targeted directly toward young women with naturally curly and coily hair, so these hate comments towards the natural hair community are a marked contradiction, and one that won't go unnoticed.

On June 29th, Bey was set to perform alongside Jay-Z as part of their BET Awards performance line-up. However, the network ended up resorting to airing a clip recorded at their recent On The Run Tour. At the VMA's however, Bey shut it all the way down, performing 16 of her songs for the world from her self-titled fifth studio album. The reasons are unclear as to why Beyonce and Jay-Z didn't attend the BET Awards but we're guessing the network's producers still haven't let go of their grudge with Queen Bey, and are coming for her by any means necessary--even if that means attacking her daughter's hair.

Recently we've noticed an uptick in the number of people criticizing Blue Ivy's hair on Facebook pages, social media, and traditional media outlets and we hope to be a place for supportive naturals to have their voices heard. By this stage we think it's pretty clear where we stand (but just in case, we fully support any man, woman or, in this case, child's right to wear their hair natural without coming under scrutiny), but we want to know how you feel about Karrueche's comments. Let us know in the comments!