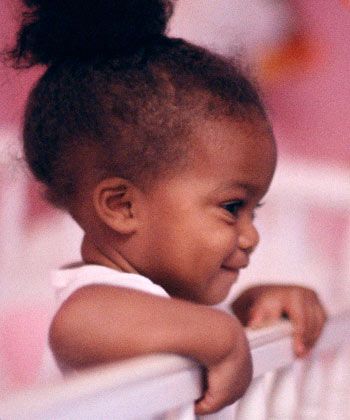 The natural hair community is getting stronger by the day here in the U.S., but that isn't the case for the rest of the world. In Brazil, the home of the Brazilian Blow Out treatment that uses formaldehyde to straighten tight curls and coils, the pressure to straighten begins very young.

Much like the stories that comes from those in the natural hair community today, who remember long, painful hours of having their hair straightened before they even stepped into an elementary school, women with tight curls in Brazil are encouraged to straighten their hair as well as that of their daughters. And, that encouragement doesn't just come from the media and culture -- it has also been supported by medical professionals in hospitals.

This story isn't new. Back in September, the site Black Women in Brazil broke the news about Santa Joana hospital, which posted a response on its Facebook page to the following question:

Their response was to use alternatives to formaldehyde straightening treatments (which the ANVISA [Agência Nacional de Vigilância Sanitária or National Agency for Sanitary Vigilance] strictly prohibits on children) in order to give your daughter beautiful hair.

Many on Facebook considered the post racist and prejudiced and since, the hospital has removed it. However, per usual, there were two sides to the argument.

While many thought the use of the words "makes children more beautiful" in reference to straightening the hair was an outright declaration of prejudiced and even adultification of children, others thought that the post was simply meant to encourage mothers not to use chemicals on their daughters' hair -- especially in a country that so values straightened hair.

And, to be fair, the post did call out straight hair alternatives to chemical processes.

Either way, the story is just one more reminder that this movement is borderless and just as important globally as it is locally.

Our question to you: what would be your response to seeing the post?

Unfortunately, this article is no April Fool's joke. You can read the full story on Black Women in Brazil.