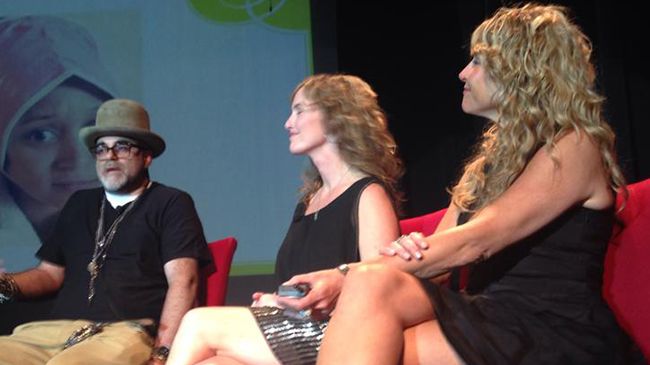 To describe DevaCurls Curls Night Out in one sentence would be impossible.

To sum it up, it was a night to celebrate curls, coils and waves and curly culture. It was also a night to put DevaCurl -a company that has been a leader in the category - center stage. DevaCurl is the brand that created the terms CG (Curly Girl Method) and No Poo (shampooing without sulfates).

Curls Night Out featured real-life stories by Tyler curly girls, a local version of the “The Curly Monologues" - a New York production created by Jonathan Pillot. Playwright Trey Anthony presented a portion of her play 'da Kink in My Hair.

I've never met a curly girl who didn't have an amazing story about how being curly affected their life.

DevaCurl's artists team - stylists Mollie Owens, Shari Harbinger and Cal Ellis - brought their 3-Step product regiment to life with song and dance. It was a night filled with laughter and tears. "Life's not a straight line; It's curly," Pillot said. The Liberty Hall Theater in Tyler was filled with stylists and curlies who came to watch the show, which included presentations by Michelle Breyer, co-founder and president of NaturallyCurly.com; Jonathan Pillot, creator of The Curly Monologues; Shai Amiel, world-renowned celebrity “Curl Doctor;” Dr. Lew Losconey, motivational speaker with a phD in Psycurlogy; and Stevie Jo Rosenbalm, a Top-20 finalist on the latest season of The Voice. The performances were met with a standing ovation.

"I hope people take away that being curly is a big, exciting celebratory thing," says DevaCurl President Colin Walsh. "That's the essence of the show."

DevaCurl will host two more Curls Night Out events in the fall, and will move to 10 to 15 cities in 2015. The tour will culminate in a huge curl gathering – a “curlapalooza” - where thousands of curlies will be able to celebrate and connect.