When Rita Hockenbury went to her daughter’s soccer games, she was always holding her hands over her eyes to shade them from the sun.

“Being curly, there was no way I was putting a hat on my head,” Hockenbury says. “That would smash my curls.”

So she sat down at the kitchen table and

“That’s how it all started,” Hockenbury says.

Nine years later, her tinkering has turned into Vizini, a patented strapless visor that slips onto your sunglasses.

“When I started, I wanted to do something for myself,” she says. “And then I thought, this is a good idea.” 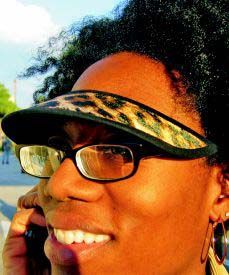 “Women really get the no hat-hair concept,” Hockenbury says. “It’s a concept that sells itself. Even at trade shows, people want to buy my samples.

”One of the side benefits of Vizini is the benefits to the skin. Because you’re not squinting, “it’s like Botox,” she says. Her dermatologist believes people should wear it year round to protect the eye area from sun damage.

She currently sells her Vizinis on her web site, in boutiques, beauty salons, sporting goods stores and eyeglass shops. The Vizini is available in nine colors. For summer, she is adding such colors as lime green and hot pink. They are also available with a company logo.

Hockenbury says she has lofty plans for Vizini -– plans that include helping empower other women through an organization called Women for Women International. The yearlong program offers direct aid, rights education, job skills training and small business development. Since 1993, Women for Women International has mobilized more than 125,000 women and men in 105 countries worldwide to reach out and support women survivors of war -- one woman at a time.

“I want to open a factory in a worn-torn country Hockenbury says. “I want to be a part of this endeavor that teaches women skills to grow their own businesses and to become profitable.”