The Bunch of Health and Beauty Benefits in Mistletoe

“Oh, ho, the mistletoe!” While the mistletoe’s green leaves and white berries (often confused with holly, which has spiny, dark-green glossy leaves and red berries) are synonymous with Christmas, the plant has properties that can enhance one’s health and beauty all year long. 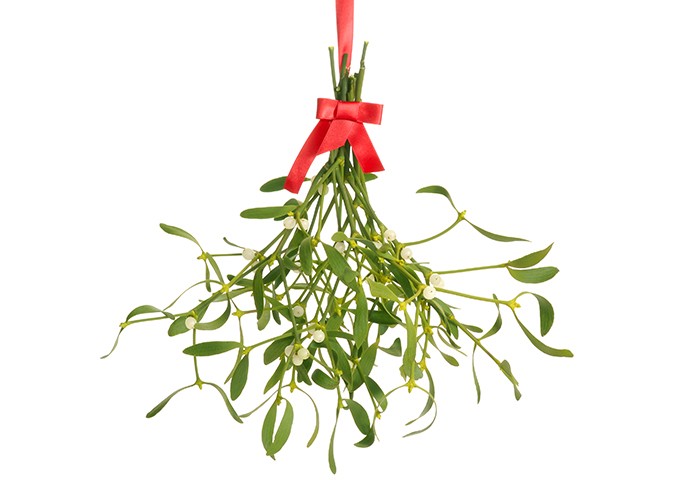 Long before Bing Crosby, Burl Ives, Nat King Cole, and the Biebs sang about mistletoe in their Yuletide tunes, the parasitic plant’s roots reached back to pre-Christian, Greek, and Roman eras.

According to Live Science, Celtic Druids used the plant for ceremonies. They believed the more rare species found on oak trees had sacred powers, such as healing illnesses, protecting against nightmares, and predicting the future. In ancient Greece, it was associated with fertility, and was used during Saturnalia, a festival honoring the god Saturn, and in marriage ceremonies, which is where the kissing tradition may have originated. During Roman times, it represented peace; enemies would stand beneath it to settle their differences. The Romans also used it as decoration. Additionally, mistletoe has a prominent place in Nordic mythology.

The origin of mistletoe’s name is just as interesting. According to the National Wildlife Federation, mistletoe is a parasitic plant — absorbing water and nutrients from the trees and shrubs it attaches to — with 1,300 species worldwide. When ancient Anglo-Saxons observed that birds liked to leave their droppings where the plant grew, they called it “mistiltan,” which translates to “dung-on-a-twig.” Or, as the Smithsonian defined mistletoe, “a parasite named after bird poop.”

But about those health- and beauty-related properties …

Just as with its inclination in the wild, mistletoe has spread across the internet. A number of sites list the plant’s possible health benefits.

According to the National Cancer Institute, “mistletoe is one of the most widely used alternative medicine therapies for people with cancer.” Per WebMD and others, European mistletoe been used to treat cancer in Europe since the 1920s. 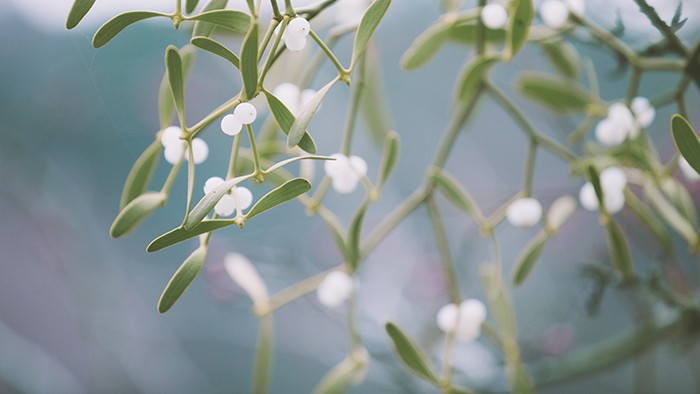 Of important note, depending on the type of mistletoe and what part is consumed, especially the berries, it could be toxic to people and pets.

Mistletoe is usually available as an extract or tea. Consumption in large quantities is not advised, and could be dangerous. As always, consult a health professional before taking.

Bustle, Care2, and other sites state that mistletoe’s beauty benefits are due to its anti-inflammatory and anti-aging properties from antioxidants.

As Bustle describes, mistletoe can be boiled and made into a homemade toner to help heal damaged skin, regenerate skin cells, and treat acne. It can also be blended into a homemade cream to unclog pores.

Of greatest interest to NaturallyCurly readers is that mistletoe can be used to help strengthen hair follicles, and promote hair growth. Bustle recommends adding mistletoe extract to conditioner or using mistletoe tea as a hair rinse between washes: “Your slightly dirty hair will love those antiseptic properties, while promoting healthy hair.”

And don’t worry about smelling like Christmas when applying mistletoe. As Bustle points also out, drawing from Jonathan's Mistletoe Diary, despite the abundance of mistletoe candles and potpourri available, mistletoe is scentless.

Have you tried mistletoe for health- or beauty-related matters? Please share below. Happy holidays!