For a couple of months, my curls basked in the return of a soft, natural-looking black hue. But now spring is rolling back around, and anyone who knows me understands my urge for lighter shades in the warmer weather. Last week I made 2 boxed dye attempts at coloring my black to a lighter wine reddish tint. Fail. Yesterday I took a glance too long into the mirror and didn't like the multicolored oddness going on on top of my head. So I did what any natural curly girl would have done--I took a trip to my kitchen. 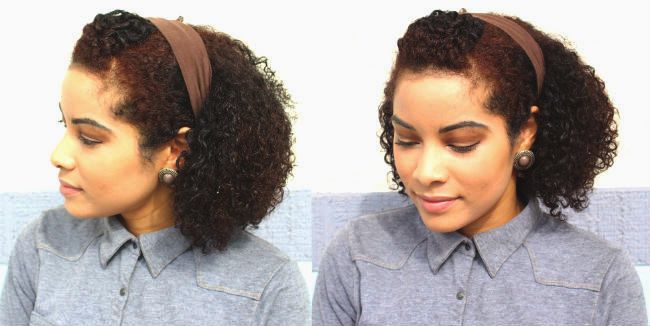 EVOO is a popular one in the curly hair community mostly because it is a natural conditioner. Its thick viscosity is perfect for my hair type because my curls tend to be extra dry and drink moisture every chance they get. In this recipe, olive oil allowed my hair to retain whatever is going into it but still acted as a penetrable coat of shine and protection.

Raw honey because it is a natural humectant--it helps hair retain moisture. It also contains a tiny amount of hydrogen peroxide, according to beforeitsnews.com. Though honey can be a challenge to clean out of hair, for this recipe it works perfectly with olive oil, providing a coat of natural sheen and glossiness. Daily Makeover says raw honey contains glucose oxidase, an enzyme that produces peroxide. When combined with cinnamon, it will give natural hair color vibrancy. Some like to dilute it with water before applying as a deep conditioner, but in this mix, I applied it to dry hair on top of my olive oil layer.

Some dark-haired naturals like to do tea or coffee rinses to give their color a boost. The problem they often run into, however, is a weird brassiness. In this recipe, I prevented this from happening by adding cinnamon on top of my olive oil and honey layers. Cinnamon is known for being one of the safest natural lightening ingredients, so being a little heavy handed on the shaker will have no harsh consequences on your hair's health. I coated the hair strand from root to tip for even distribution; I noticed that my roots took to the cinnamon quicker than my ends did.

Cayenne pepper rectifies deficiency (blood flow) in the hair follicle, according to My Natural Hair Growth. That increased blood flow encourages hair growth. In addition, this spice is much like cinnamon when it comes to safe hair color-changes abilities. When combined with other herbs and carrier oils, cayenne's reddish tint stains natural hair in the healthiest way possible. I used this in conjunction with the cinnamon, especially in areas that I notice are not penetrating as well. Remember that cayenne is a pepper--it can burn your scalp's cells if massaged too harshly into them. The main difference between cayenne and cinnamon for this purpose? Just a few dashes are all you will need to achieve a lightened look--and no rubbing it in. (Note: If you have allergy sensitivity, cayenne pepper may do a number on your sinuses)

I use unrefined coconut oil after rinsing this mix out of my head. Beforeitsnews.com says to apply coconut oil before the cayenne pepper step, but I did so afterward. I wanted to make sure that the color and health benefits were both being sealed into my hair. This is not recommended for someone with a sensitive scalp, however.

Lemon juice is a natural accelerant for lightening -- meaning, it plays off of the sun's natural hair lightening qualities. You may apply lemon juice from a squeezer or the lemon itself onto the pieces of hair that you want highlights, and every time you go outside you'll begin to notice a change of hue. In the photo above, I was lightening my bang area with lemon every few weeks for quite some time. Although it was very effective (look how light my hair became!) I wouldn't recommend using this method repeatedly over a long period of time like I did because lemon is very acidic and can dry your hair out. If you'd like a lighter look with lemon, I would recommend diluting it in water, first.

Note: this recipe is great for those with medium to higher porosity curls.

Since I have been coloring my hair for over a decade, it might be safe to say that my hair follicles are open to this kind of treatment (pun intended). Also keep in mind, I used henna in 2 different sessions before this treatment, so my pores took to this mix well. I began to see results in only 10 minutes--I left it in for an hour.