Dads Are Learning How to Do Hair, Little Girls Rejoice 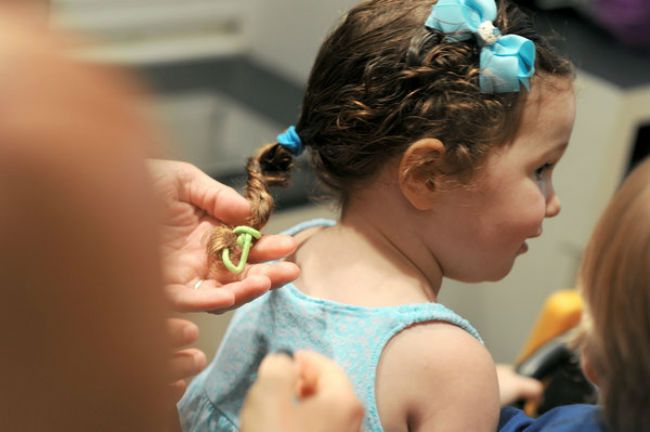 Remember those days when Daddy was in charge of our hygiene and maintenance for the day while Mommy was away? Oh, the blissful tragedy.

Kudos to Pops for making an honest effort. However, for most of us this was a day of resistantly dragging through an hour-long hair washing and braiding session while his hands stumbled to grip the combs, his mind scrambled to recall where Mom kept the extra hair ties, and his go-to style when it was all said and done was a half sopping wet low pony that was matted beyond recognition by the time Mom got back home.

If only Dad had access to one of these classes offered by Upper West Side, Manhattan Cozy Cuts for Kids salon.

"Dads want to learn," said Cozy Friedman, owner of the salon. "I hear it all the time. But you can see right away on the playground whose hair was done by her dad. We've really had to start with the basics here."

Early Monday morning, daughters ranging ages 3 to 9 attended the class, which ended up being filled to capacity so much so that father-daughter duos had to be turned away. The session lasted 45 minutes, starting with tips for brushing and detangling. It concluded with two timeless hairstyle tutorials: the ponytail braid and the braided bun. The girls of the crowd seemed mostly thrilled of receiving these styles, probably due to their wide popularity from the movie Frozen.

Full-time father and clothing manufacturer Ricky Zinn expressed his need to learn how to do his daughter's hair was due to growing up with only male siblings. "I grew up with brothers, so I don't know anything about it."

Early Monday morning, daughters ranging ages 3 to 9 attended the class, which ended up being filled to capacity so much so that father-daughter duos had to be turned away.

Another working father of a curly-haired daughter, David Shapiro, attended the class to educate himself on styling his daughter's unique 'corkscrew-like' texture. "I get her ready in the morning--my wife goes to work early. But I have to leave the hair part to the nanny."

Ira Cohen is a lawyer by profession and a dad by default. That doesn't mean he wasn't also willing to learn how to care for his daughter's naturally curly hair. "It's a completely different situation," he said.

One seat over was Zinn had trouble using the bobby pins given during the ponytail tutorial. "If I let go, this thing is going to go."

While these dads struggled to adapt to the tricks of the trade for styling and maintaining their daughters' hair, not a single one gave up on the initiative. And the impact of this class will hopefully be followed for salons and cities to come.

We definitely love to see more dads willing, eager, and able to enter the women's hair care world with confidence--especially if it's for their number one girl, their daughter.