The Most Common Hair Product Allergies You Need to Know About

Recently I received a rather heated e-mail in which a reader objected strongly to one of my previous writings. I had concluded that a specific ingredient is generally safe for use in hair care products, but the reader’s personal experience had been one of severe allergic reaction. It was a dreadful experience for this person, and it brings to light the unfortunate and unavoidable fact that many of the ingredients used in hair and skin care are potential allergens or irritants. It is not at all uncommon for users to report reactions to seemingly innocuous ingredients that are generally recognized as safe and effective for most people.

Allergies are a highly complex issue of the immune system, and reports seem to be on the rise, although it is difficult to determine whether that is due to increased incidence or increased awareness. One particularly confounding factor in these situations is that an immune system may mount an allergic response after years of repeated exposures to the material, which can be quite baffling and can sometimes lead to an ingredient being overlooked as the source of the problem. 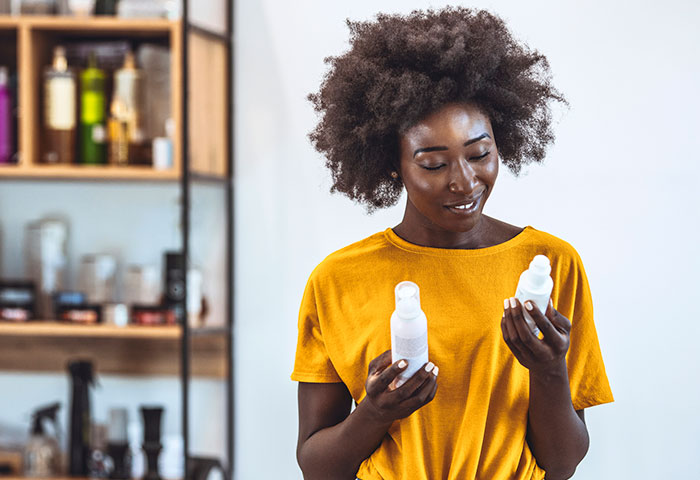 Sensitization is the word used to describe an allergic reaction that develops after repeat exposure to an allergen. Often, the first time a body is exposed to a substance it does not seem to know what to do with it and basically just observes it.  However, in subsequent exposures, it apparently recognizes the substance, and if it deems the material a dangerous intruder, it mounts an attack (immune response) against it.

Occasionally, sensitization occurs after one small exposure, but more often it occurs after a single high dose or large surface area exposure, or after prolonged, repeat exposures over either small or large surface areas. This is why products such as hair dyes and relaxers recommend that you patch test a small area of skin every single time you plan to use the product.

Symptoms of sensitization to ingredients in hair care products can include development of a painful, pimply rash, scaly, itchy atopic dermatitis, contact dermatitis, eczema, inflammation and itchy, flaky scalp.  Systemic and/or anaphylactic reactions are unlikely given the typical quantity of any ingredient in a hair product and the relatively small area of exposure, but they are not entirely unheard of.

The Most Common Allergens

Preservatives are probably the most common ingredient category responsible for allergic reactions in hair care products.  Among these are the formaldehyde donor antimicrobials, which include diazolidinyl urea, imidazolidinyl urea, DMDM hydantoin, and quaternium-15, to name a few.  These ingredients are notorious with dermatologists for causing skin irritation. Another preservative family notorious for being sensitizers is the isothiazolinones.

Fragrances are also a notorious allergen for many people.  The manufacturers of these products do not usually disclose what is in their proprietary formulas, and they often contain many common allergens in addition to whatever compound(s) are responsible for their characteristic scents.  For this reason, many consumers attempt to avoid fragrances, but most products contain at least a masking scent to cover up unpleasant odors from some of the other ingredients. This can present a genuine challenge to the sensitive person.

People with extremely strong food allergies may also find themselves predisposed to having allergic reactions when exposed to ingredients derived from their food allergens.  This seems to be especially true for those with corn, nut, and wheat or gluten intolerances. Nut oils, wheat germ oil, wheat proteins, hydrolyzed wheat proteins and wheat amino acids should be avoided by those with the relevant allergies.  However, there are other ingredients derived from wheat and corn that are not labeled as such, and can truly be problematic for some people.  Vitamins E and A can be wheat-derived, while Vitamin C may be corn derived.  Propylene glycol and the ethylene glycol used to ethoxylate (PEG-modify) materials can be corn-derived. While the science does not necessarily explain why these derivative products should elicit an allergic response, there are no few accounts of them doing so.  Therefore, it bears consideration.  One problem is that product labels are not required to denote the source of any given ingredient.

Botanical and animal-derived oils such as coconut oil, argan oil, castor oil, avocado oil, canola oil, and lanolin have also all been found to produce allergic responses in a small percentage of people.  Others find their skin intolerant of mineral oil or petrolatum, which are petroleum-derived products.

The ingredient about which we were contacted was propylene glycol, which is generally recognized as safe, but is definitely also recognized as an occasional allergen. It is possible that allergy to this is more widespread than previously realized as well, or it may be becoming more common due to greater exposure to materials sharing the chemical features of the glycols. These include compounds modified by ethylene glycol to increase water solubility, such as sodium laureth sulfate, PEG-modified silicones, and other surfactants, and they are very prevalent in foods, medicines and cosmetics.

Typically allergies to these types of materials are accompanied by existing cofactors that seem to predispose a person to a reaction. These co-factors include pre-existing eczema, exposure to large areas of propylene glycol-based products such as cortisone, food allergies, as well as yeast and hormonal issues.  Also, some populations seem to be missing the necessary enzyme for the metabolism of these glycols.

MORE: Surfactants, Sulfates and You

How do you know what to avoid?

Of the countless different ingredients used in hair and skin care formulas, most are generally safe and effective for the majority of the population.  However, many of these ingredients also carry the potential to be sensitizers for some people, producing reactions ranging from mildly unpleasant to truly severe. It is wise to know if you have any specific allergies and to carefully read labels and ask questions of manufacturers to determine whether or not  a product is safe for you.

One thing is safe to say, and that is that we are daily exposed to a far greater number of complex substances than our ancestors ever were: medicines both topically applied and ingested, foods treated with many chemicals, processed foods containing many additives, lawn care chemicals, pesticides, cosmetics with long ingredient lists, and chemically-treated clothing and furniture and carpet, just to name a few.  The potential for cumulative and synergistic effects is simply staggering when one considers it.

For these reasons, it is nearly impossible to predict when and if a specific ingredient or combination of ingredients in a hair care product may produce a deleterious response.

How to reduce the potential for an allergic reaction

One way to reduce the potential for a sensitization reaction is to reduce your exposure to all of these materials overall. Another thing you can do is to rotate your products, so that exposure is limited and your immune system can “rest.” Restricting the number of ingredients to which you are exposed by choosing products with shorter ingredient lists may be helpful as well. Unfortunately, in the case of allergies, natural is not always better, as many plant and animal-derived products are responsible for allergic reactions. There are companies who strive to create products that are truly hypoallergenic, such as Arbonne, but even still, there may be some who react to one of their ingredients.

This article has been updated for grammar and clarity.