When civil rights activist Rev. Al Sharpton made his semi-serious bid for president in 2004, there weren’t many who felt that he had an actual chance of winning.

Aside from concerns about his controversial political activism and accusations of anti-Semitism, the nation just wasn’t ready to be governed by a preacher with a perm.

For Sharpton to have a hairstyle distracting enough to affect his chances of occupying the White House is pretty ironic since his very first visit to the White House was one of the reasons that he got a perm in the first place. The other reason was because James Brown, the late soul singer, wanted him to.

I’ll give you a few seconds to “process” this madness.

him on the path of the press and curl, just before taking him on a visit to the White House. 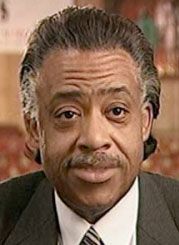 Sharpton met James Brown during his days as a street preacher in Harlem and leader of a civil rights organization for youths. He became friends with Teddy Brown, who was James Brown's son. When Teddy was killed in a car accident in 1973, James Brown flew in to attend the funeral and asked to meet the young minister who had befriended his son. Brown eventually assumed the role of mentor and father figure to Sharpton, who was raised in the projects by his single mother and whose own father abandoned him.

Sharpton idolized Brown, who was a world celebrity and happened to wear perms that could rival any woman’s hairdo. When Brown decided that he wanted Sharpton to abandon his Afro and get a hairdo that resembled his own, there were no questions asked.

Brown received an invitation by President Ronald Reagan in 1981 to discuss making Dr. Martin Luther King’s birthday a national holiday. Brown invited Sharpton to accompany him but wanted him to get his hair done for the occasion. He took Sharpton to his hairdresser who permed his hair.

It has been that way ever since.

"He said, `I want [Reagan] to see a younger version of me when he sees you,'" Sharpton recalled in an interview with Ebony Magazine last year. "After I did it, he said he wanted me to keep my hair like that until he died, as our bond. So that's how I ended up with this hairstyle.”

Sharpton’s permed hairstyle has become his trademark and he has flaunted it for more than three decades. He wears it as a tribute to Brown and an expression of a style that has become his own.

Even when Sharpton was warned that his flamboyant tresses could be a liability during his presidential bid, he didn’t deviate.

Sharpton’s hair is not as big and sissified looking as it was in earlier years, and streaks of grey have added to the toned-down look. But he still needs to get rid of it.

I admire Sharpton for keeping his promise to Brown by continuing to get touch-ups as long as his mentor was alive. But it has been more than two years since Brown died of congestive heart failure on Christmas Day in 2006.

Even though our highly talented soul singing icon has long taken his act to a higher stage, Sharpton shows no signs of putting his perm to rest.

If there are any petitions circulating in support of such a move, I’d gladly rush to sign. But it might take more dramatic measures.

There is a very popular ballad that James Brown often performed where he asks the woman whom he loves not to leave. During those heartfelt performances Brown would dramatically drop to his knees and cry, “Please, please, please, please,” as he desperately begs her to stay.

Maybe that same approach would persuade Sharpton to pay tribute to us and make his perm go away.