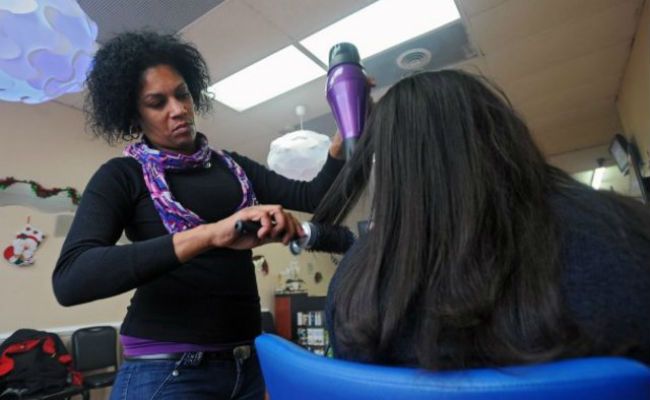 I recently came across a piece by the Atlanta Black Star titled "Did Natural Hair Kill the Black Hair Salon?" and upon reading the title and analyzing the article in its entirety, I quickly came with up my answer:

To support my opinion, I will be taking snippets from the article that clearly explains the natural hair community's innocence from what Black hair salons are trying to blame us for.

At the time the movie Good Hair was released, the natural hair community was still in its infancy stage--most Black women wore relaxed hair which required frequent visits to their local salon. After watching the movie, however, many of them rethought their personal--and their children's--hairstyle choices. One might argue that Chris Rock killed Black salons--at the very least, he started a movement that I'm sure a lot of Black salon business owners didn't see coming.

Back in the day when women used to get their hair chemically treated, they needed to go to the salon often for routine maintenance. A smaller number of women still need this service now. And since many salons used to be reluctant to style natural hair, these women had no choice but to turn their bathrooms into a home salon.

Since many Black salons were so reluctant to style our natural hair, we had no choice but to turn our bathrooms into a home salon.

“I opened my salon, Dyaspora, in 1996 and I was one of the top natural hair salons in the country. I made so much money because everybody was getting their hair done,” Da Costa recalls.

I think everybody is still getting their hair done--whether it’s from the comfort of their home or at the salon. There still remains an abundant number of opportunities for Black salons to stay profitable as long as they follow the market trends.

“There are several cultural forces conspiring to dismantle traditional beauty salons. The greatest might be the Internet, where megasites like CurlyNikki and popular YouTube hair gurus help Black women unravel the mysteries of their own hair."

Conspire against who? To dismantle what?

Just because a group of naturals were generous enough to start sharing their wealth of knowledge with other women does not mean that they've "conspired to dismantle traditional beauty salons". I will conclude this part with two quotes which state that "knowledge is Power" and "you shall know the truth and the truth shall set you free."

“The future remains dark for stylists with an eye toward the past, those who refuse to acquire the skills required for textured hair. But those willing to embrace the movement are finding tremendous opportunity, whether it’s establishing natural hair care salon in underserved markets, or developing their own product lines.”

The honest truth is that seasons change and one must be willing to adapt to changes in the environment. This means that Black hair salons must be flexible and adaptable enough to respond to any changes that might have an effect on their revenue. With today's advancements in technology, businesses can leverage the power of social media, blogs, and tools like Google Alerts to find out about what’s trending and what matters to their target audience.

Do you think that the Natural Hair industry killed Black hair salons?