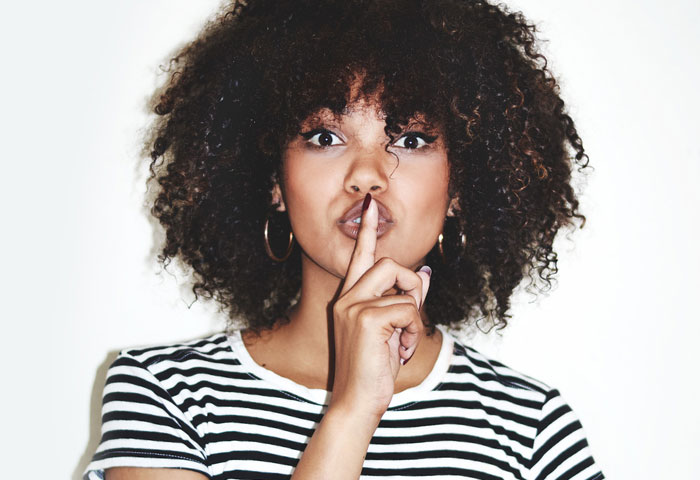 I always find myself in a position of informing people that this unofficial natural curly movement is not about rolling out of the bed and not doing anything to your hair. As I began to read, watch and interact with more naturals, I discovered that there is a niche of women who do just that to their hair, nothing.

In every culture and community there are unwritten rules and standards. The natural hair community is slowly but surely starting to build its own as well. Imposing your own standards on others is undoubtedly wrong, but does that notion still hold true when applied to an occasion? Are there such things as professional and unprofessional hairstyles? What is considered formal and what is considered casual?

Is the same measuring stick that is being applied to Solange's care-free coils also being applied to Charlotte, who's a partner at Jones & Associates Law Firm? Is it because of social reasons? I have no idea, but I have noticed that we might tell Solange to "do yo thang," but give our cousin Portia the side eye because she opted not to do a flat-twist out for the wedding.

Again, is there a standard? That's between that person, her tresses and possibly her employer. But beyond that I have noticed that there are basic unwritten rules in the hair care community that I must say I am way over.

1. Having Your Hair "Styled"

"There is this thing about getting your hair done," Nicole Ari Parker said on Melissa Harris-Perry's "The Politics of Black Hair," and I can relate to this notion too well. Because women are so excited to learn, experiment and share incites from their hair care journeys, whatever has been identified as the staple or go-to product, technique or style tends to become the standard for the community. Is there anything wrong with that? Not at all. Is there anything wrong with applying that communal standard to others? Um, yes. I've learned from experience that the most intricately styled hair is not a reflection of health. So leave the sista alone who wants to rock the big, undefined afro! Ask to touch her hair; it might be softer than yours.

I get it, I get it. You want to maintain the water-wave look, but why react aversely to it when it dries? The gel and pudding police is on patrol, and if your hair has the slightest trace of frizzyness, run, because they're coming full force with the flax seed gel & coconut oil concoction and it's about to go down! Some ladies don't have the best luck discovering a curl definer that doesn't leave their hair crunchy. Even more women could just care less about curl definition. How your hair reacts to high dew points can be a reflection of dryness, but it can also be a reminder that you are no longer relaxed. Don't mistake the obsession with curl definition for porous or damaged hair. It's okay. You just look natural.

Constantly trying to lay your edges down will be the death of them. People always tell me I have a perfect hairline and ask how I maintained it. Because flat-twist outs are my staple hairstyles, there's no need to lay my edges down. Not to mention I couldn't care less. I'm natural, and hair that's less than an inch (baby hair) is bound to stand up. Do I know how to lay my edges down for a sleek look? Yes, but it's definitely not a daily concern.

Can anyone explain to me what professional hair is? I am completely lost. I guess our picked-out afro is equivalent to the messy bun that straight-hair ladies wear effortlessly when they go for a quick run to the store. Is everything else fair game? Does color matter? Of course this varies by industry, but there are still far too many girls and women with natural hair who make the news each week for wearing their hair the "wrong" way to work or school. The comments sections of those news stories tend to be full of people eager to police the hairstyles of others.

I'm glad that the instinctive reaction to pull out the pressing comb for the annual gala is starting to whither. Women are slowly accepting that they can wear their hair in its curly state instead of straightening it for formal events. When I went to prom, I saw a few straight haired ladies who only gave their hair a few passes of the Chi iron, so why would it matter if I opted to pass on the curling pudding?

Everyone has thoughts that run through their minds when they see something that's not their cup of tea, but I don't see the point in making efforts to hold a public discussion around it. Unfortunately, society teaches us that we should be concerned with the appearance of other individiuals and even judge them at a higher standard than we judge ourselves. Discussing the appearance of others has always been a hot topic in dull conversation, but maybe next time we should think twice instead of taking it to the the street (i.e. web).

What is your take on unwritten rules and standards in the natural curl community? What are your own standards?

This article has been updated for grammar and clarity.