What It's Like Wearing Natural Hair as an Arab American Woman

I recently had an amazing conversation with Hadear Kandil, creator and curator of m'laulau, a community of conscious Arab women engaging in the radical act of embracing their naturally curly hair. Here, she reflects on her experience as an Egyptian-American woman born with thick curls. 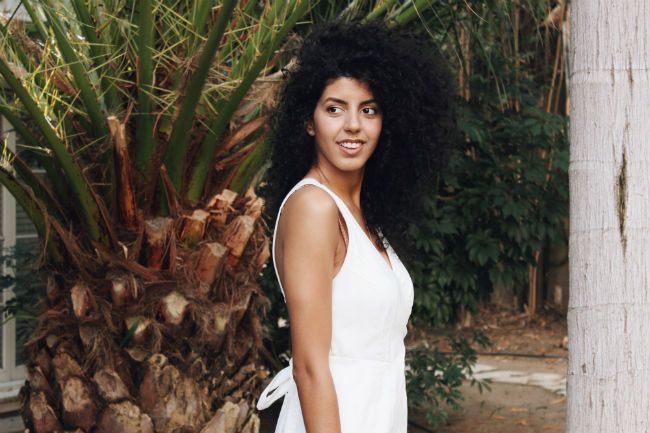 I was lucky enough to have not one, but two completely different experiences growing up with curly hair.

In the '90s, there weren't nearly as many resources or products available for natural curls as there are now.

My parents got divorced when I was four, but I've always been really close with both of my families. Every summer growing up, I'd fly to Egypt to hang out with my dad, whose Russian wife was obsessed with big, voluminous hair and would love blowing out my curls and giving me a full 'fro before heading down to the beach. However, at home in New York, my mom would slick my hair back into tight, high ponytails with Dippity Do Gel and John Frieda's Frizz Ease.

Oh my God, John Frieda, that was a household name for years!

Come to think of it, I went through so many bottles and probably never used it correctly.

Those were really the only two products available in the mainstream for naturally curly hair then; and for that reason, I am forever indebted to Ricky's. So that was the childhood of my hair, in a nutshell. As I got older, I experimented with treatments and color. My hair's been through just about everything you can imagine: braids, highlights, relaxers, pixie cut with the shaved head on one side, keratin treatments -- name it and I can probably check it off my list. 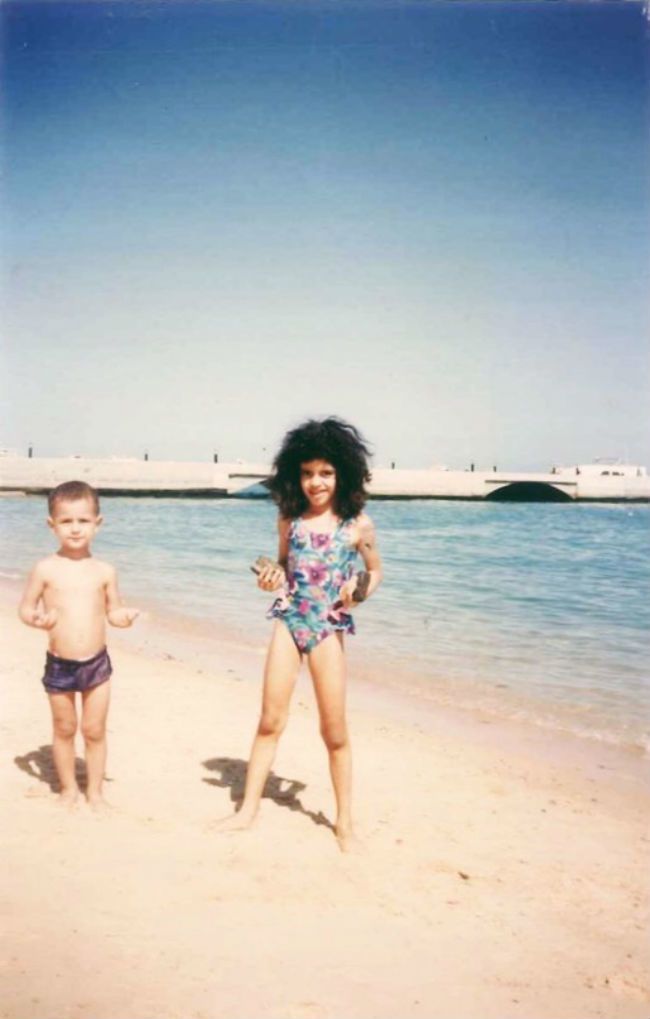 I fractured my right forearm in middle school. My mom thought a relaxer would give me a break from having to style it in the morning before school.

She had this stylist who would come to our house to do her hair, so she had her do the relaxer on me. I sat in her chair for hours and brought to her attention that at one point I felt it burning. Like, really burning. Apparently, that's how you know it's working. When it was all washed out, I had burn scabs all along my hairline, which took weeks to heal. Arm in a cast, burns across my forehead, seventh grade. Good times.

I guess the entirety of our experience in straightening or manipulating our natural texture to be something it's not is a manifestation of some deep-rooted shame, no?

I used heat on my hair to straighten it twice a week every week for years, I didn't know what my natural texture was throughout that period of straightening after doing it for so long. I thought my curls were just something of the past, some cute thing I had as a kid, and that my natural texture had just become straight and limp, so I'd go on straightening it because it looked so awful with all that accumulated heat damage. It might have been the humid summers in NYC, waiting for the train to pull up into a sticky uptown station and realizing that your hair -- which you just spent two hours on -- starts frizzing up within a few minutes.

I decided that the time and energy I was spending on my hair was a waste, and that I should be doing more productive things with those hours spent flat-ironing it.

Cue the YouTube videos and exploring the word 'transitioning' -- this was all new to me.

I finally started letting my hair breathe. The active part of my transition came while I was traveling, after I left New York. I moved to Poland, where a major personal transformation took place and a newfound sense of self-acceptance was realized.

I left a familiar life in my hometown of New York City for the unknown halfway across the world, and shed all these limiting layers I had been carrying around as part of my identity for a long time. Embracing my hair in its natural state was very much an emotional part of that change. I went from having this need to control the details around me and making sure every strand of hair was in its perfect place to letting go.

The Arab community is huge, and widely diverse, so I can't, and wouldn't wish to speak for everyone, but I think the pressure to straighten naturally non-straight hair goes back to this deeply ingrained perception that deems European features beautiful 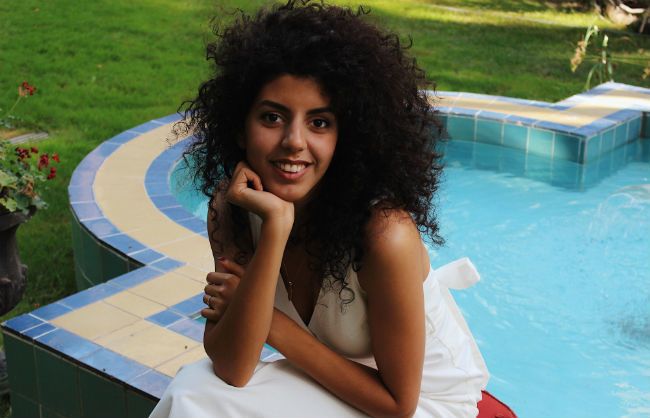 And it was refreshingly liberating, and necessary.

I let go of this fixation with what society considered as aesthetic perfection, let go of control, let go of the need for my every next move to be calculated. It was a kind of awakening, and part of it was totally ditching the notion that my natural hair texture was something I had to look for a solution for, something to fix or flatten. Hair is just hair, but it's the stories and the diversity that surround it that make it meaningful and worth having conversations around. And it all deserves to be celebrated.

For the Arab world, like much of the rest of the world, most countries have some history of colonization by the British or French. Arab hair textures don't all fit into one mold, so you will find that Middle Eastern women cover an expansive range, from having silky, fine, straight tresses, to soft and wavy hair, or somewhere in the spectrum of thick curls and coils. The Arab community is huge, and widely diverse, so I can't, and wouldn't wish to speak for everyone, but I think the pressure to straighten naturally non-straight hair goes back to this deeply ingrained perception that deems European features beautiful: silky hair, fair skin, blue eyes, as beautiful, and anything that falls outside of that is not. Curly hair is seen as a problem to be fixed, and you'll find no shortage of salons in the Middle East that cater to, while reaffirming, these insecurities.

The Arab community is huge, and widely diverse, so I can't, and wouldn't wish to speak for everyone, but I think the pressure to straighten naturally non-straight hair goes back to this deeply ingrained perception that deems European features beautiful

Luckily, I feel like this is changing, slowly but surely... taking a direction that's more inclusive, free, subversive.

I can only speak based on my own experience and observations of the way culture is shifting in Egypt, but I feel it's a positive byproduct of the 2011 revolution, where for the last six years, though there is still significant political repression, people are expressing themselves in different ways. People have been shedding these old layers that subscribed to outdated beliefs or societal fears, many of which dictate how women should behave, and opinions on what is appropriate or respectable and what is not. 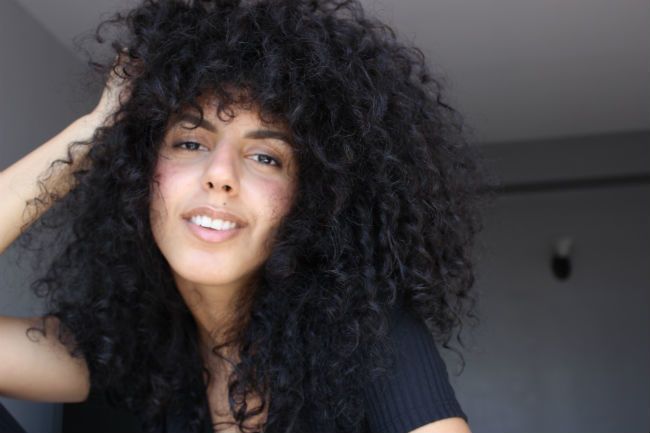 Embracing my natural hair texture connects me to my truth!

What can be more honest and empowering than embracing who we are in our natural form? Being able to nourish and celebrate my natural curls helps me encourage others to do the same, from an informed place. I'm in a unique position because I get to observe both American and Egyptian culture, call the two my own, and change them according to what works for me and the way I live. In the United States, it's become a movement -- a bit of a sisterhood among women who have confronted their feelings and false beliefs around their hair, wearing it out loud without shame or apology.

It's unfortunate that to be ourselves is to make a political statement, but it's a really beautiful thing to see people, men and women, step out of their inhibiting fears, whatever they are, and speak and live their truths.

As for Egypt, I feel so much closer to my roots since I've started wearing my hair curly in ways that I can only begin to describe.

If you really want to take it back, the Ancient Egyptians would use gels and animal fats to curl and style their hair. The jury's still out as to what their natural texture actually was, but years of conditioning and a complex shift in how Egyptians identify geographically has taken its toll on what's generally seen in the region as beautiful. One of the most meaningful ways embracing my own texture has helped me feel more culturally connected is that I've been seeking and finding countless other strong Egyptian women from incredible backgrounds and experiences - writers, artists, political activists, disruptors - who have amazing stories of going against the grain regardless of how hard the odds were stacked up against them. This is what I'm inspired by. It is a lifelong journey to seek inspiration through others' stories, knowing you are not alone in whatever struggles you braved or status quo you've challenged.

It's really an ongoing discovery, one that feels it's just beginning and I'm super excited for.