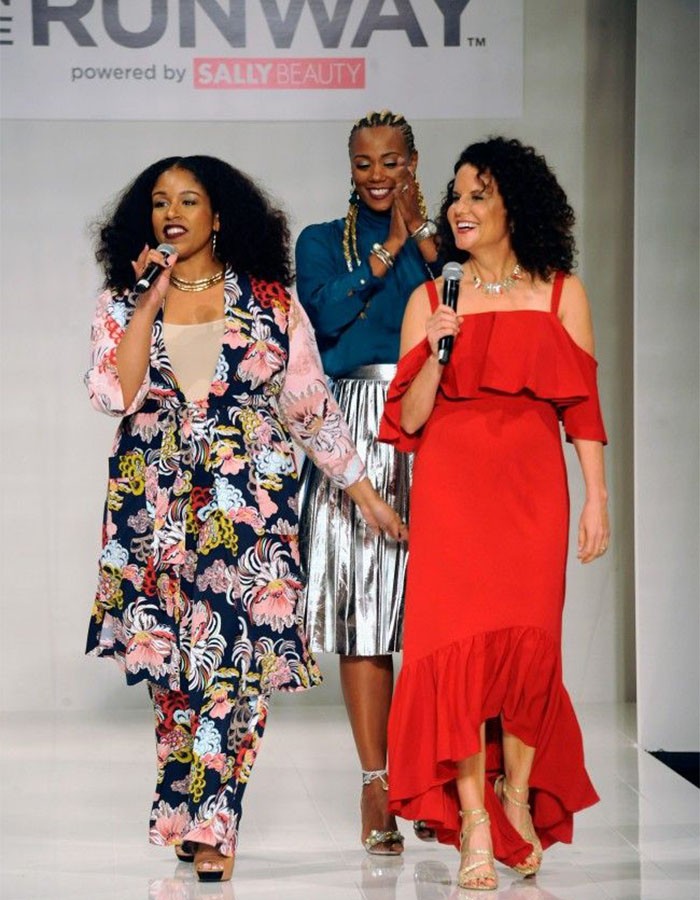 It’s hard to describe the feelings I had as I walked onto the runway last year at Texture on the Runway ’17. Dozens of cameras from the top media outlets were flashing at the end of the runway, and the beautiful faces of hundreds of the hair world’s biggest influencers packing Gotham Hall literally took my breath away.

The fashion and beauty media was impressed, too, generous in their plaudits.

Happi magazine wrote: “An inspired runway show and electric backstage buzz were hallmarks of what has become the hottest hair ticket in town.”

“The only dish it was offering up was a hot, steaming plate of 'slay' topped with a heaping of 'Yaaaaas, Queen.' The music? Loud. The fashions? Somehow louder. The hair? Loudest!” wrote Danielle Belton of The Root.

Allure wrote: “The show itself took place at Gotham Hall in Midtown New York, a grand venue that matched the grandeur of the hair looks that came down the runway…. It was truly a testament to the versatility and beauty of textured hair.”

“At this season's Texture on the Runway show makeup and apparel took a backseat as natural hair ruled the main stage, making the show one of the most inspiring ones we've seen to date. Because what's more empowering than rocking your natural hair?” said NYLON magazine. 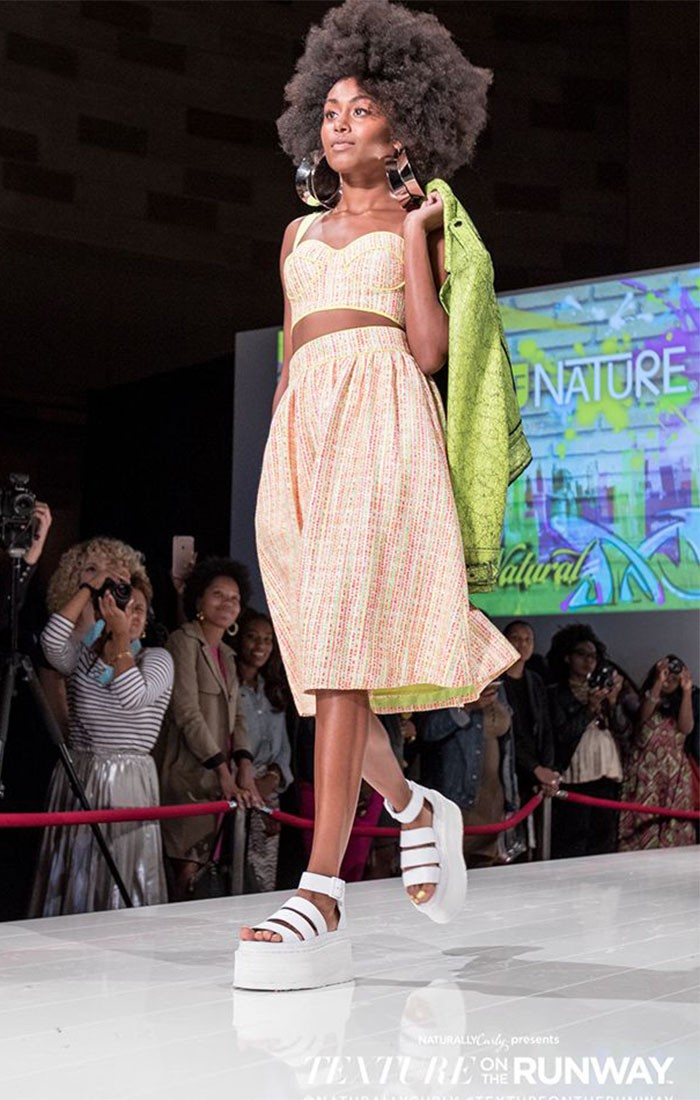 Six years ago, I never could have imagined that an idea spawned out of a rant session could turn into one of the biggest events for the natural hair community.

When I began covering New York Fashion Week for NaturallyCurly a decade ago, I loved all the creativity I saw on the runway – the gorgeous gowns, flirty dresses and sophisticated suits. But with each show that I attended, it became more apparent that the women on the runway lacked any diversity. And all the hair – with a few exceptions – was straight. Whether the hair was parted down the middle or pulled back in a ponytail, there was barely a curl or kink in sight.

The women on the runway did not represent NaturallyCurly’s community.

Backstage with one of my favorite stylists at one of well-known designer’s shows, as he pulled one of the model’s long silky mane into a high ponytail, he said: “Michelle, I tried to get her to do some curls, but the designer said no.”

My photos and interviews were focused on the people in the audience – women with amazing manes of curls and coils. One gorgeous black woman I interviewed in the audience was a model who told me she hadn’t been hired by any of the designers. She suspected the reason she wasn’t on the runway was either the color of her skin or her tight coils.

When I returned to Austin, I shared my observations with the NaturallyCurly team. As I complained to our global editor at the time, Cassidy Blackwell, she got riled up and we began talking about what we could do to counter this lack of inclusion in the world of fashion. 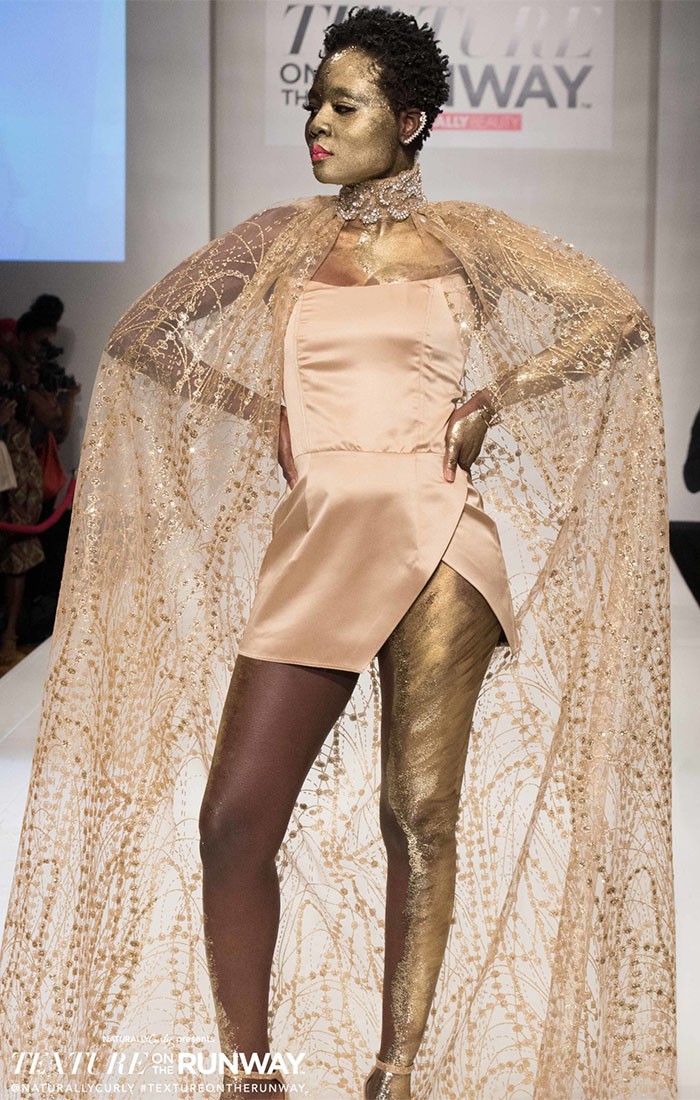 “We thought, why don’t we create a runway show all about curls? Why don’t we celebrate the diversity of texture on the runway?” Blackwell says.

If we were going to do it, we wanted to do it big. And that meant doing it during New York Fashion Week, which was a risky proposition. We had so many naysayers who insisted there was no way we could get people to come to our show during Fashion Week – a show that would be located more than 30 blocks from the center of the action. We would never be able to get any beauty editors to come to our event, they said.

“It was important to celebrate a runway show when and where all the biggest and best fashion shows were happening,” Blackwell says.

Our vision was to create a top-notch fashion show that enabled brands and their stylists to put texture front and center — to let the hair dictate the fashion rather than the other way around. We wanted to give them full reign to create their looks. 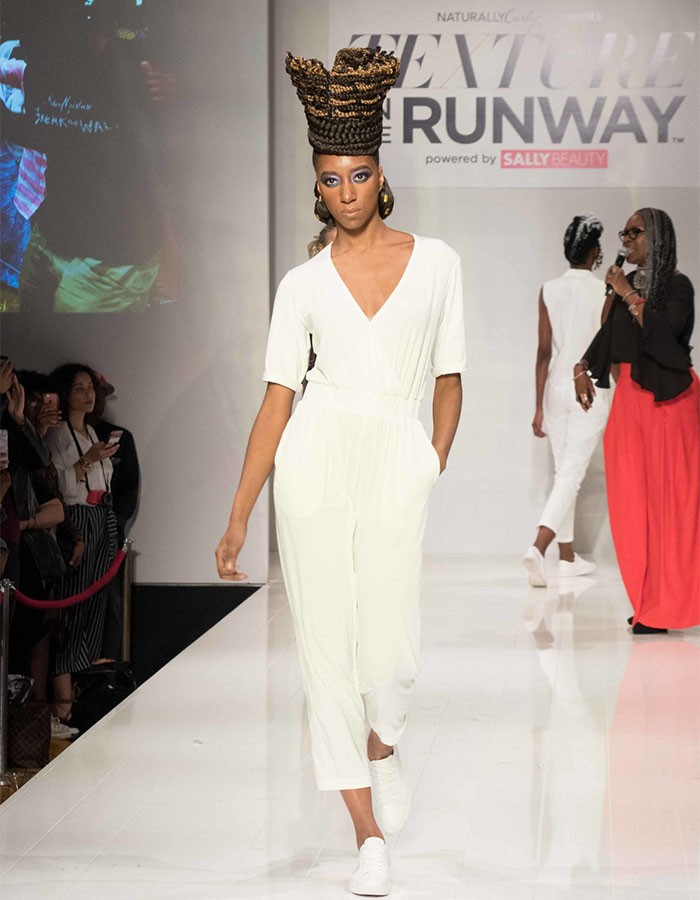 Brands and stylists enthusiastically jumped on board, loving the creativity of the event and the opportunity to create their own hairstyles rather than having to do what the designer desired. Sponsors included Curls Unleashed, Hair Rules, Matrix, Arrojo and Mardi. CURLS sponsored the drinks.

As the day approached, there were more than a few hiccups. RSVPs were trickling in slowly. A brand needed a last-minute model call within 48 hours of the show when the lead stylist changed his creative vision. A blizzard was in the forecast for the night of the event and snow began falling as models tottered down the street in their stilletos from the salon to the venue. TextureMedia team members and volunteers were rushing to fill goodie bags – bags packed with 25 pounds of products – an hour before the doors opened. Somebody spilled a drink on the sound board and it nobody knew for sure if the audio would work.

As the time approached for the door to open, we cautiously looked out the window. We were shocked and delighted to see that a line had formed around the block. By the time the lights dimmed and the show started, City Winery was packed to capacity with media, natural hair influencers, hair stylists, community members, and VIPs.

“From the moment it started – and music filled the room – I knew it would be okay,” Blackwell says. “It was so beautiful to see it come to life. It all came together in one beautiful hour-long runway show unlike anything anybody had ever seen before during New York Fashion Week.”

Over the past six years, texture and diversity have been steadily making their way onto the runway as designers work to better reflect society. We believe Texture on the Runway has played – and will continue to play – a role in ensuring that we view our curls and coils as something to celebrate rather than a problem to be solved.

After the event, we took a four-year break to focus on other initiatives.

But due to popular demand from brands, we hosted our second Texture on the Runway 2016 in February 2016, with Target as the retail sponsor. The brands — Softsheen-Carson, Cantu, Crème of Nature, Garnier and Design Essentials — took it to a whole other level, with elaborate fashion themes, dancers and, of course, amazing hair. The lovely Patrice Yursik Afrobella co-hosted with me. 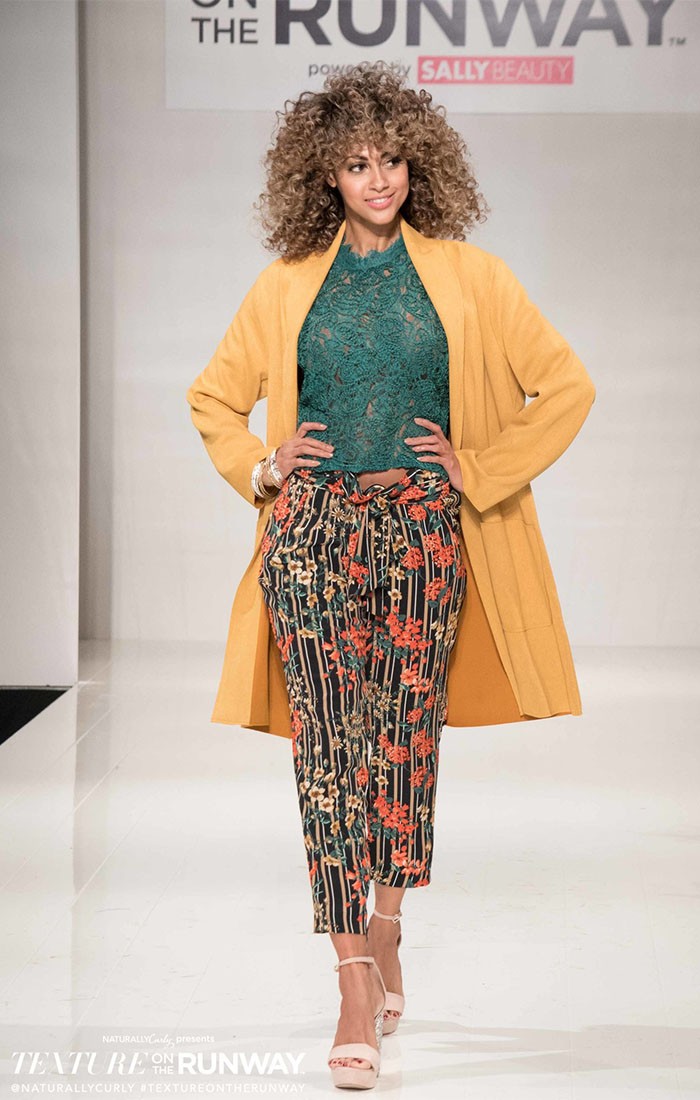 For Texture on the Runway 2017, we knew we had to raise the bar even higher. We moved to Gotham Hall — a huge historic space in Herald Square — which could accommodate several hundred more people. It also allowed us to add additional activations, such as a media suite complete with its own virtual runway.

Sally Beauty signed on as the retail sponsor.

“Texture on the Runway was the perfect platform to help tell our story,” Linda Voracek, Group Vice President of Merchandising for Sally Beauty. “Texture on the Runway is unique from other events in that it allows hair to dictate fashion and highlights the diversity of hair textures and styles in a bold way.”

Monica Stevens @Moknowshair co-hosted with me and the number of brands grew to six – Cantu, Carol’s Daughter, Crème of Nature, Curlformers, Mielle and SheaMoisture.

Entertainment was integrated throughout the show, with Syncopated Ladies tap squad opening the show for Cantu and other brands showcasing singers and dancers into their presentations.

Texture on the Runway had gained such a reputation that Smooth n Shine wanted its own custom show this February in Atlanta to celebrate the relaunch of the brand. Nikia Phoenix was the co-host of the event, which drew influencers from across the country. 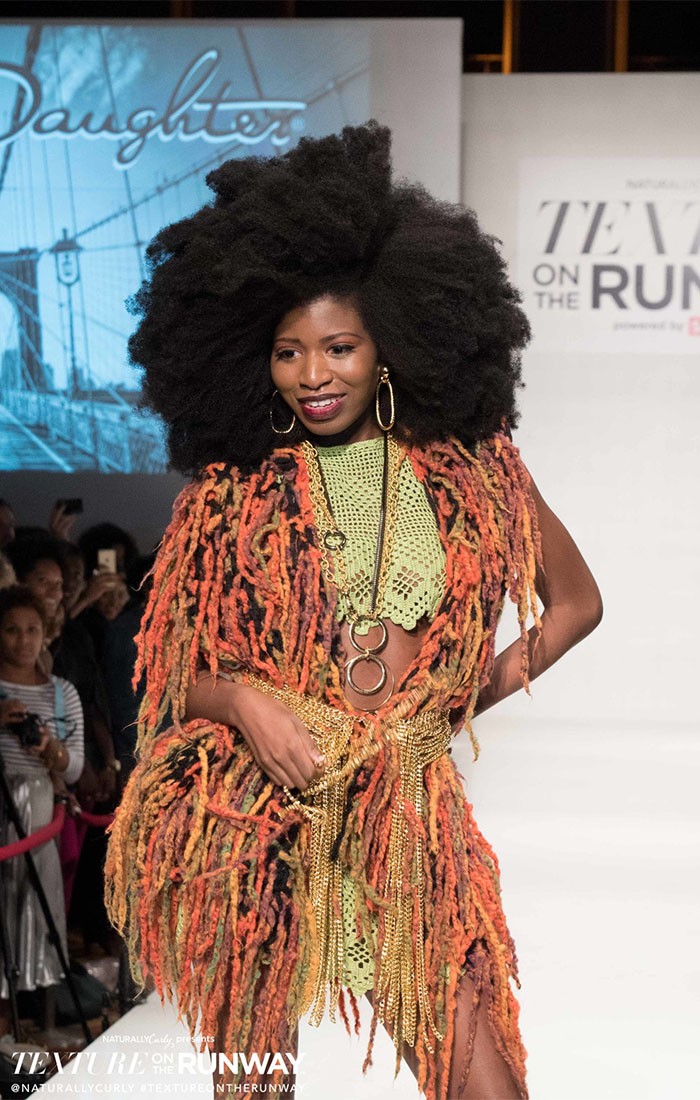 “Fortunately, I had the privilege of attending last year’s Texture on the Runway event and it was truly inspiring for me, both on a personal and professional level,” says Sina Hilbert, associate brand manager for Smooth ‘N Shine. “This partnership between NaturallyCurly and Smooth ‘N Shine seemed natural as we are both working to help multicultural women embrace their hair while instilling a strong sense of pride and confidence in each woman.”

Texture on the Runway ’18 is shaping up to be an epic event, with seven brands taking their interpretations of texture down the runway on Sept. 6 – Cantu, Carol’s Daughter, Camille Rose Naturals, SheaMoisture, Crème of Nature, Mielle Organics, and The Mane Choice. Other participating brands include Curls Unleashed, As I Am and Smooth ‘N Shine. Each brand is working on its top-secret theme, all of which are sure to dazzle the crowd.

And the co-emcee is one of the biggest names in entertainment right now. Stay tuned!

With leading brands, a firm belief in the beauty of diversity, and all the flair and fun the curly community is known for, NaturallyCurly will ensure that Texture on the Runway ‘18 continues to elevate curls and coils onto the runway as well as throughout society.