Does Natural Hair Make You "Blacker?" 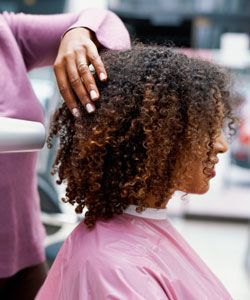 Trending topics on Twitter can sometimes be humorous, crass or just plain dumb. But they can also serve as an insight into what a large group of people are buzzing about. Recently, a lively conversation began about whether or not having natural hair makes you “blacker.”

Can you be “blacker” if you're already black — and “blacker” than who?  We decided to get to the bottom of the controversy and add our own opinion to the conversation.

Does Natural Hair Make You "Blacker?"

Over the last few weeks, more and more articles and responses have popped up on the Internet regarding natural hair and “blackness.” Sister 2 Sister posted an article that asked this same question: does having natural hair somehow make you “blacker?”

The question spurred a frenzy of comments on Twitter, and the author shared her thoughts on the issue as a woman with a perm. She revealed that she “never believed in the silly notion that Black women who straighten their hair are trying to resemble their White female counterparts with long, silky smooth tresses.”

A look through the comments on the article shows that most women agree with her, and that hair does not define a woman, nor can it be used as a measurement of “blackness.”

Trying to define blackness is like trying to define love; it's different for every single person and produces unique experiences that can rarely be duplicated. Of course, like love, blackness means something different depending on who you ask.

For some, blackness reflects someone's interests, clothing or the way they talk. For others, it may have more to do with deeper qualities, such as a knowledge of black history or having and displaying cultural pride.

Historically, natural hair has been used as a source of black pride and resistance to assimilation. The Afro in particular had social and political connotations that reflected the “black and proud” sentiment of the time. Since then, however, the decision to go natural has become popular for all kinds of reasons and has even become a national trend devoid of political implications.

Natural Hair is a Personal Choice

Wearing your hair naturally may make your more confident or more conscious of your native texture, but does natural hair make you “blacker?” The short answer is no.

Sometimes harsh words fly back and forth between the natural hair community and those who wear weaves or get their hair chemically-straightened. But one thing everyone has to remember is that our hair does not define us — it simply reveals our sense in style and fashion much the same those killer heels do!