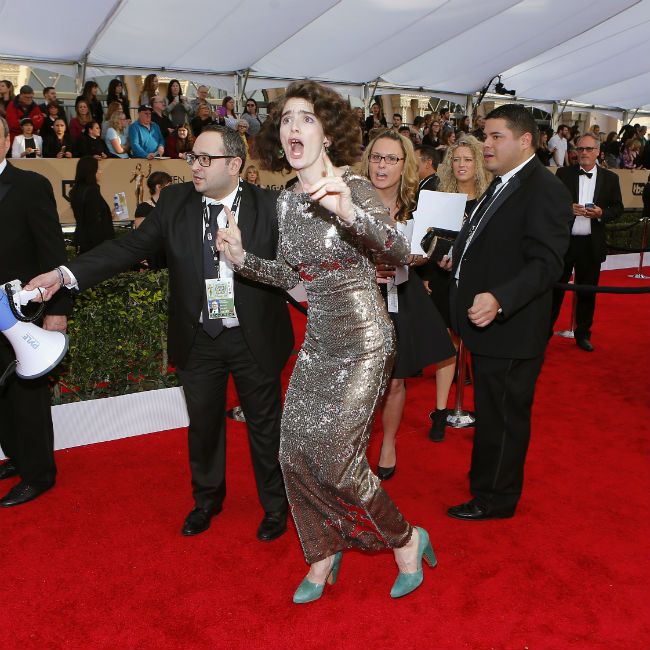 What I did do, however, was troll the blogs and social media to weigh in on the most beautiful red carpet hair. And I think the public vote on who stole the award show's spotlight has been clear.

While Gaby Hoffmann made Entertainment Weekly's 'Best Dressed' list for "rocking carefree disco curls," paired with a bronze sequin dress to round off the look. The NaturallyCurly world was being wooed by Girls actress Gaby Hoffmann. Who said curly or frizzy hair was unprofessional, unkempt, and ill-prepared for a glamorous Hollywood event? Surely not Hoffmann. And we don't think so, either.

Known for taking a defensive stance about her hair in the past, Gaby is no stranger to various critiques made by anyone from close industry colleagues to social media bullies. "I'm human, I have hair," the New Yorker has said in response to fans inquiring about her Girls character, Caroline, wearing purposely poofy and visibly unbrushed naturally wavy-curly hair.

Her curls are a classic

Born into a Bohemian society at growing up in the Chelsea Hotel with her mother, Hoffmann has never felt the need to apologize for qualities that others have called out as 'typically feminist' or 'radical'. After spending nearly 15 years away from the Hollywood life since appearing in such classics like Now and Then, Sleepless in Seattle and Field of Dreams, Gaby has re-emerged as a fan favorite to the Girls club. Still, the haters have always loved lurking around. "You know what's great for feminism?" she asked The Debrief. "Respecting everybody's own choice."

When she appeared on the red carpet this past weekend for the 2016 SAG Awards, social media had much to say about her happily flowing cropped curls. One follower asked Twitter, "Why does Gaby Hoffmann always look like someone took a knife to her hair?" Another poses the question, "Can somebody take away Gaby Hoffmann's SAG card please? #NoOffense #OrWhatever #SorryImNotSorry #YouCantDoThatOnTelevision."

Those of us who support Gaby's embrace of self in her natural beauty applause the actress. One Twitter follower shares our sentiments, saying "ugh, Gaby Hoffmann has wonderful hair... #obvious." Hopefully more women in the industry will, like Hoffmann, make the choice to show off the hair that grows from their hair as it actually appears without any heat alterations on the red carpet.