Last-Minute Halloween Costumes ANYONE Can Do

If you're a procrastinator with absolutely no idea what you're wearing for Halloween this year, we're here to say... we're procrastinators too. But that's okay, because sometimes our most creative ideas come to us under pressure. The NaturallyCurly editors challenged each other to see what last-minute ideas we would come up with, and here's what happened. 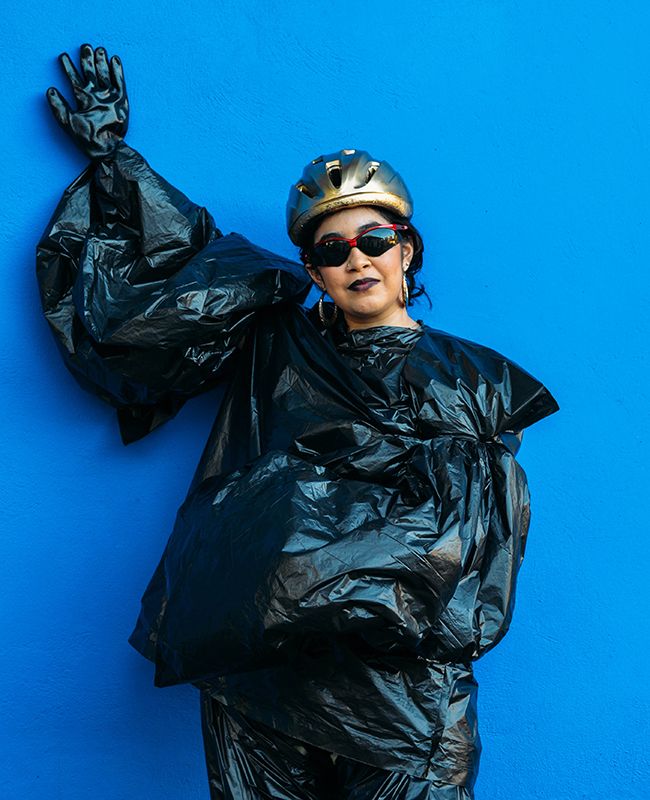 I dressed up as Missy Elliott from "The Rain" music video. I've always been a huge fan of both Missy Elliott and her stylist June Ambrose. Both were/are revolutionary and changed the industry. The music video was released 20 years so I thought it was only right to pay homage this Halloween. I definitely took the easy route when making this costume, so all I really needed was black trash bags (prepare to sweat), sunglasses, and a bike helmet, all of which I found at a thrift store. This was probably the funnest costume i've ever made. Not only is it completely ridiculous to walk around it, but I really enjoyed channeling my inner "The Rain" Missy. 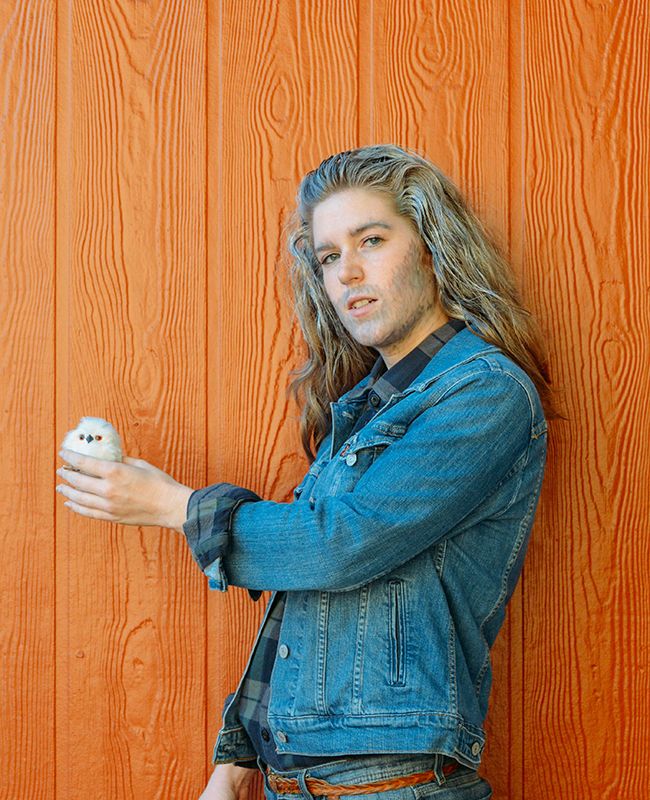 @cuur as Bob the Killer

I've been watching the original running of the show Twin Peaks. It was filmed very near my hometown, but I hadn't ever seen it. My costume is Bob from the show, who is a scary mad man who only certain people can see. He makes really crazy faces in the show—he does very little speaking but lots of mouth snarls. I like to play the part that fewer people expect, so I decided to dress up as this terrifying man. I already owned the owl, a black face paint crayon and some grey eyeshadow for my beard, jeans and a belt, I just had to buy silver and white hair paint. You can use Jerome Russell's Temp'ry Hair Colors in Silver for this. Then I borrowed hairspray to keep my bangs back, a denim jacket, and my boyfriend's flannel (since the colors of mine were too girly). As a bonus, I printed out the wanted poster. 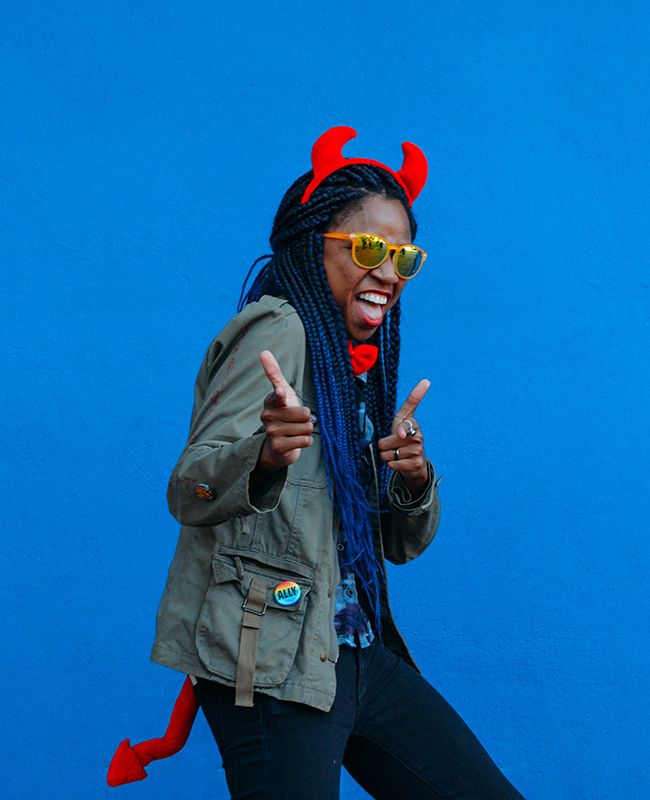 @gerilynhayes as a demon with a penchant for modeling

Although most would assume just by looking that I am the forsaken light bearer, villainized in ancient texts and scriptures, I am a regular ol' demon with a penchant for modeling. The bow tie is a spirited nod to the literal red-headed stepchild, "Junior," in the movie Problem Child, starring John Ritter #RIP. As an adult, I like elaborate the youthfulness of my character as much as possible, so dressing up as a playful demon was the perfect choice for me.

Being a kid means you don't have a lot of moola to spend on extravagant costumes. Such is the case for the lazy adult, making CVS a lifelong friend. It took me $5 and my regular clothes to create the look. I love the fact that I can move with ease while still getting into the Halloween spirit. Plus, I like the idea of being a horned supernatural entity. It's pretty cool! 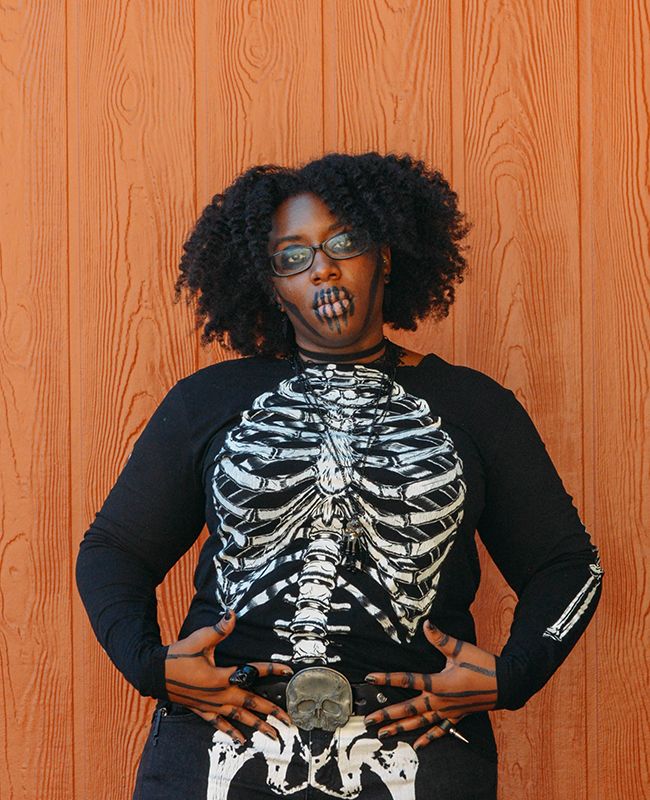 This Halloween season, I'm a reminder of what's truly inside of all of us—a skeleton!

It's pretty easy to find bone themed goodies when you're the kind of person that shops on the creepy side of Etsy and Hot Topic well into adulthood, even if I DID have to swim through a sea of 'Adventure Time' merch to find the outfit. Meanwhile, in the interest of keeping things extra quick and simple makeup-wise, I forewent laying on any of my clown white paint for a skull face in favor of just deeply outlining my jaw, deepening my eye "sockets" and drawing in the suggestion of exposed teeth and finger bones with black eyeliner, shadow, and lipstick! The cool thing about All Hallows' Eve is that even if you're going all out, you don't need to be an anatomy student or a practiced MUA to get the spooky vibe right. Just believe you can be frightening, and you will be! 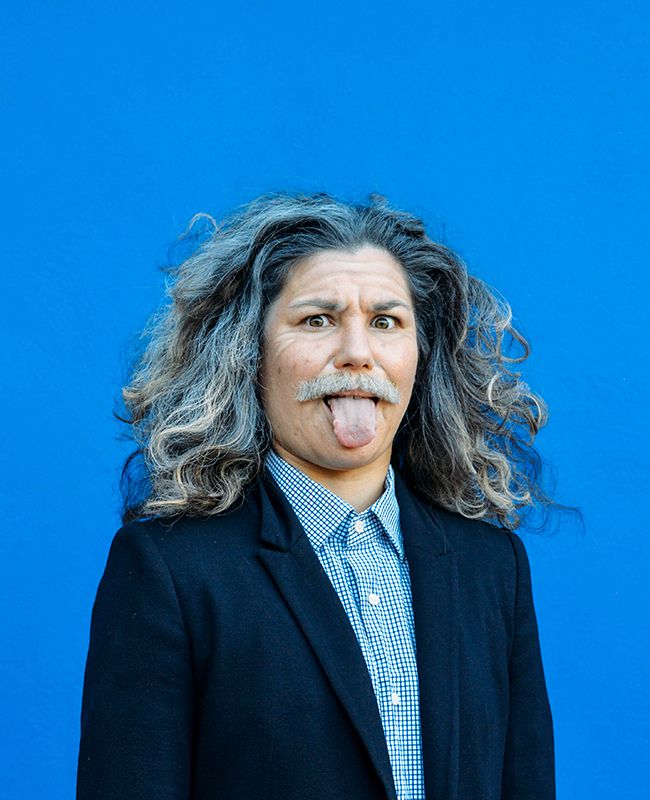 I dressed up as an old man a couple years ago, and even created real wrinkles using liquid latex. That costume was so much fun but if I'm being honest it was a literal pain to remove, so this year I wanted to resurrect my wrinkles and moustache in a quick and easy way. To create my Einstein face, I simply took an eyeshadow brush and the eyeshadow I use for my brows, and drew wrinkles on. To make this realistic, I would raise my eyebrows or furrow my brows and trace my actual wrinkles with the shadow. It's basically contouring, but the opposite of what we normally aim for. I dotted the eyeshadow to create a few liver spots, for a special touch. Then I brushed out my dry, curly hair - which is such a big no no, it was actually fun to do it for once - and sprayed some white and grey hair paint on it. I didn't have spirit gum on hand so I used hairspray to make the mustache stick to my face, and I stole a shirt from my boyfriend and put on a blazer of mine. To top it all off, I stuck my tongue out! I know for many Halloween is a fun time to bring out their sexier side, but I actually like to do just the opposite. I think everyone should give it a try. 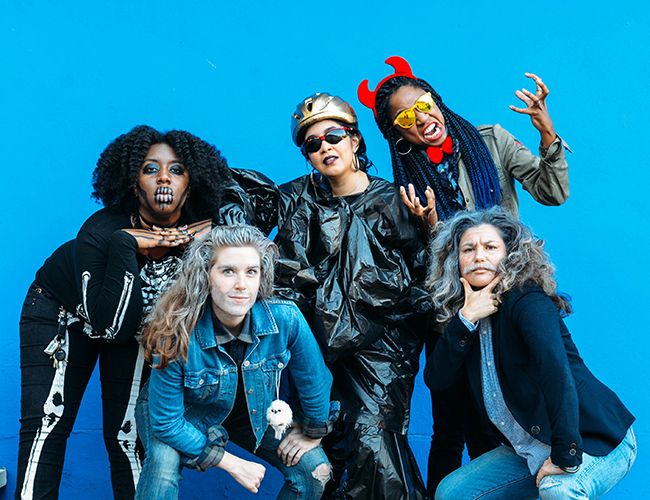 What are you planning to wear this year? Share in the comments for anyone who still needs ideas!