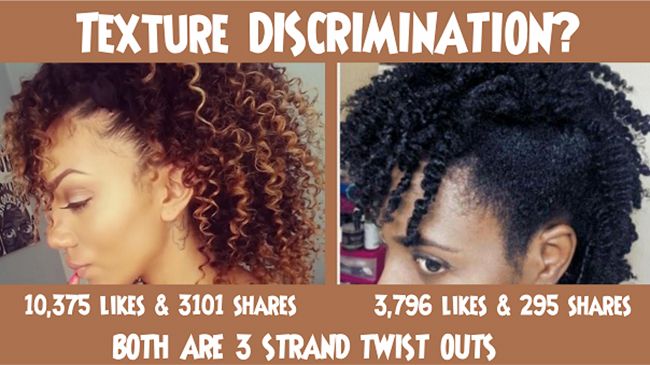 We discussed the topic of Texture Typing and discrimination in our Live panel with Miss Jessie's Original co-founder Miko Branch, Karen Tappin of Karen's Body Beautiful, & Imani Dawson, founder of the blog tribe called curl (if you missed it, watch here). YouTuber Jouelzy continued the discussion on her channel with her video on the topic. And CurlyNikki published this piece by Susan Walker of DrWalkerWellness, to which the feedback has been thought-provoking. We look forward to reading how the NaturallyCurly community feels, comment below!

So this is going to be a bit controversial. No, a lot controversial. I don’t really want to go to where I’m taking this to be honest. However, in the upcoming weeks I’m going to be discussing a topic that can be compared to nails on a chalkboard in terms of the effect it has on some women. So I want to pave the way for it by examining where some of this outrage – from a practice that is really meant to be rather benign – is coming from.

And that topic is hair typing.

I’ll be going into hair typing because, quick frankly, like SKIN typing, it is extremely valuable for DESCRIBING your hair and helping you DETERMINE the types of products that would be ideal for you, the hair care practices you should use to bring out the best in your hair, styling techniques to enhance your texture, and expectations you can realistically have for your hair. So why the push back? Why is there such an issue with using a system to classify the hair based on it’s appearance and other objective parameters? It’s obvious but I’ll state it anyway. African textured hair is extremely different from Caucasian hair. And let’s throw Asian hair in there to. Because when studies and comparisons are being performed between hair textures it’s these ones that are evaluated. I need to make this statement because when it comes to hair care, there is a high probability that you won’t be able to use the products made specifically for hair that is not textured or curly. I say a high probability instead of a definitive “NOT” because with curly hair there is a huge spectrum of textures, curl patterns and hair types. So you MIGHT be able to get away with using products that are specifically formulated for straight hair. But most women won’t. So what is the issue? Where do I begin. An article in Ebony.com in May made me shake my head. Literally. The title was“The Sad Truth About Natural Hair Discrimination”. The viewpoint of the article was that There’s a New Way for Mainstream Media to Divide Us Via Our Hair… and

…We’ve found ourselves sponsors of a beauty industry that is overwhelmingly praising a certain type of natural hair, and clearly ignoring another.

Women with kinky textured hair, commonly known as type 4, are experiencing something of a “texture discrimination” as a consequence of this new natural new beauty standard. Curly and wavy girls dominate the branding in products mass marketed to natural hair…now there is a new pressure for natural women to yearn for a specific type of natural hair.

Women with kinky textured hair are experiencing texture discrimination as a consequence of a new beauty standard now being set amongst naturals.

It concludes with a mention of hair typing with some women finding it “frivolous” and “divisive”. On some forums some women are even being ridiculed for having a hair texture that is less desirable or manageable than other textures. I don’t even know where to begin. On the one hand I would be foolish to say that certain textures are not desired over others with some women who are natural. Not all, but some. I’m guilty as charged. At one point in my life I found myself wishing, hoping and praying for the “more manageable” and “desirable” hair texture. And since I always talk about truly embracing your natural hair if you’re going to go natural, I have to examine where this is truly coming from. It’s going to get a little deep and perhaps uncomfortable. But let’s lift up the rug a little to reveal some dirt shall we?

Where It Comes From

We are 400 + years post slavery. However even though the physical shackles are gone the after effects and mental strongholds resulting from that era are as just as suppressive. One author calls these after effects Post Traumatic Slave Syndrome (PTSS).

PTSS describes a set of behaviors, beliefs and actions associated with or, related to multi-generational trauma experienced by African Americans that may be inclusive of but not limited to undiagnosed and untreated Post Traumatic Stress Disorder (PTSD) in enslaved Africans.

PTSS is an explanatory theory which posits that centuries of slavery in the United States, followed by systemic and structural racism and oppression, have resulted in multigenerational maladaptive behaviors, which originated as survival strategies. The syndrome continues because children whose parents suffer from PTSS will often be indoctrinated into the same behaviors, long after the behaviors have lost their contextual effectiveness. The author states that PTSS is not a “disorder” that can simply be treated and remedied clinically but rather must necessarily require a profound social and structural change in Americans and American institutions that continue to promote inequalities and injustice.

So what are some key BEHAVIOUR patterns that are reflective of Post Traumatic Slave Syndrome? According to author Dr. Joy Degruy, there are a few:

Insufficient development of what the author refers to as primary esteem, along with feelings of hopelessness, depression and a general self destructive outlook.

Marked Propensity for Anger and Violence

Extreme feelings of suspicion perceived negative motivations of others. Violence against self, property and others, including the members of one’s own group, i.e. friends, relatives, or acquaintances.

What I want to focus a bit on is the …distorted self-concept, antipathy or aversion for the physical characteristics of ones own identified cultural/ethnic group. Colorism is one aspect of this. And now hair texture discrimination seems to be a concern as well. It’s something Solange Knowles refers to as “curlism’. However this concept is not new. It didn’t originate with the current natural hair movement. In the U.S. The roots of discrimination based on hair texture (along with skin color I might add) are. both are deeply rooted in European colonialism and plantation system of enslaved African Americans. Anyone that was white or closely resembled or emulated “whiteness” culturally, idealogically, economically and aesthetically was rewarded. So the lighter you were and the “better” your hair was, the more favourable. In the 20th century an assessment called the “brown paper bag test” was a ritual once practiced by certain African-American sororities, fraternities and organizations who would not let anyone into the group whose skin tone was darker than a paper bag. Another test was the comb test. If a comb might snag in the hair, sorry, that’s a fail. My point in going through all of this is that our perceptions of what is desirable and beautiful are deeply rooted in slavery.

Tight, coily and kinky haired naturals are underrepresented and not given the same accolades and props that their shiny, silkier, looser curl counterparts are given.This reality is seen on social media as videos and images of these looser curls textures get more shares, likes and favourable comments than kinkier textures. It’s also argued that these women have more media and sponsorship opportunities as well. Bloggers and vloggers are speaking up as well pointing some of the blame at natural hair care companies who perpetuate the stereotypes of good hair. Essentially it’s hair that is long, loosely curled and shiny with a lot of movement. Oh, here we go again. This desirable hair texture is the one closest to….you got it! And so this is where the division comes in. The sad reality is that we are doing this to ourselves. We (as a collective) have the issue. I’ve heard from so many professional women who have embraced their natural hair texture that it’s the other black women in their office who seem to have a problem with natural hair and not their white coworkers. It’s us who tell our children whether they have “good hair” or not. We do it. And a lot of times we don’t even realize we do it because it’s deeply ingrained in our psyche.

So where does that leave us? When can hair JUST be hair? Why are we now divided yet again? I would like to say that it really isn’t that deep but the truth is that it IS that deep for some.

Back to Hair Typing

This issue is something we’ve been wrestling with for hundreds of years. It’s a problem that is pervasive and I have no answers or solutions. And that’s not what this post is about. The reason for it was to try to uncover some of the reasons why we think the way we do; to bring it to your awareness and figure out what you can do to effect some type of change in your own life. I have two daughters. Both beautiful little girls. Both with COMPLETELY different hair textures. Both soft hair but one has silkier hair than the other. She’d be on overnight sensation if I put her on Youtube. Trust me.

But what I have to consciously make sure that I don’t swoon over how cute she is when her hair is styled a certain way. I have to fight against implying how much more manageable HER hair is but commenting on how difficult my OTHER daughter’s hair is to comb. You get the picture. This is what I can do to build up self esteem in more daughter so that she appreciates and loves her natural hair.

In my discussion of hair typing, my approach is going to be objective and descriptive. It will imply nothing about “good” and “bad” hair. Just what is. It will guide you with your product choice and give you a reality check on what you can expect a product to do. If your hair is not inherently shiny, no amount of product “X” is going to give you that shine like you see of the girl in the picture! So please, save your money!

Don’t shy away from understanding your texture. Learn everything you can about your hair’s strengths and weaknesses so you can get to a point where you truly love your hair!