Why My Natural Hair Fits EVERY Professional Environment

Whenever I have had a job interview, I have always been immediately recommended to wear my hair in a bun, since wearing my hair down was considered to be less professional. Upon reflection, I've come to recognize these recommendations as a perfect example of the bandwagon effect. The bandwagon effect is when a group of people strongly believe in something, and then others blindly follow their example. Due to the perception of curly hair in the past, many tend to believe that curly hair is not professional.

Those who gave me this recommendation did not always embrace their natural hair, and subsequently they were sharing biased opinion. As a matter of fact, they were also raised with the belief that natural hair is not a beautiful characteristic. Sometimes these beliefs are part of an inner layer of a culture: its values. Hofstede defined culture as "The collective programming of the mind that distinguishes the members of one group or category of people from others." For instance, curls were always seen as the hair type which had to be straightened in the Dominican Republic and other Latin countries. Sometimes people have been raised with a certain perception, which may have formed during adolescence. 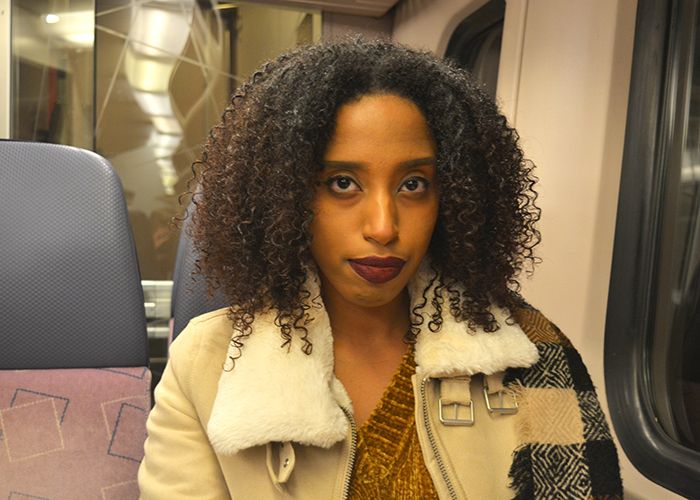 Unfortunately, these opinions have affected my self-confidence for a while. It even started to affect my performance during my job interviews. I was not as extroverted as I normally am and slowly but surely I developed the belief that the fate of my job interviews not only depended on my expertise but also on my appearance. Luckily, I realized that this was nonsense. I believe that people will always have something to say, so why would I not value my personal beliefs and opinions over the opinions of others?

I do not want to be part of an organization which selects its employees based on their appearance, rather than experience. In my opinion, these types of businesses lack professionalism. I would be thankful if such a company would reject me because at the end I would not fit with their corporate culture. Moreover, this type of working environment would not contribute to my personal development, as I would continuously be confronted with a wrong perception. Consequently, my happiness will be affected as well.

When my current employer invited me for a job interview I wore my curly hair with pride, and I differentiated myself from other participants, because of my confidence and my ambitions. Not only did I show that I wanted to be part of the company, I also positioned myself as a valuable asset rather than an option.

Are you a bit unsure what hiring managers pay attention to during job interviews?

I asked an HR manager for you and she answered the following:

"When hiring we need to ensure our supervisors that we are recruiting someone who will contribute to the achievement of the organizational goals. I hire someone if I believe that the candidate will successfully support me in achieving the departmental targets. If these are not met, then I will be held accountable. Not only will this affect my yearly budget, but also my credibility within the business. [Here are some of the things we look at when hiring]..."

Do you feel that hiring managers perceive curly hair as non-professional?

If you have ever felt that your hair has affected your job search, we want to hear about it in the comments.