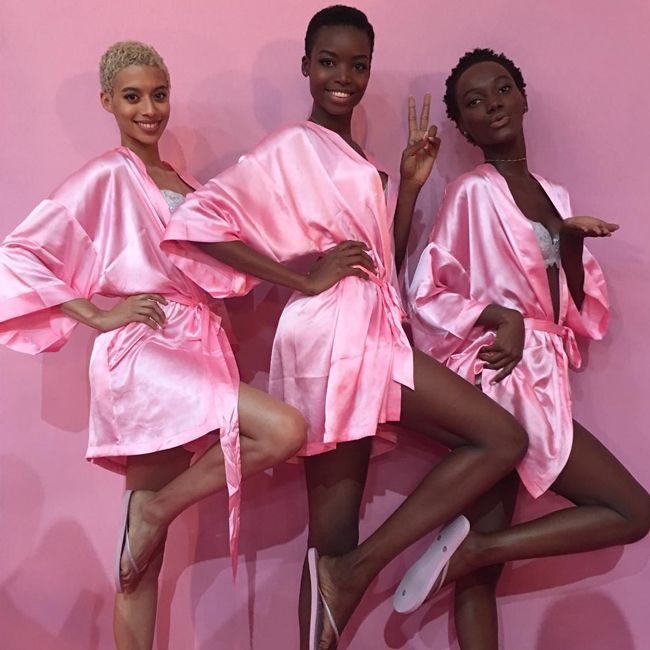 In 2015, Maria Borges made waves in the fashion world by wearing her naturally curly Type 4a hair in the Victoria’s Secret Fashion Show. This year is even more exciting, as she is joined by models Herieth Paul and Jourdana Phillips who also wore their hair naturally curly. The models proudly showed off their natural hair on Instagram at the filming of the show, and tonight millions of people around the world will see natural hair on the main stage. Here are five reasons why this was a major deal.

The fashion world still has a long way to go in terms of casting diverse models. In fact, less than 25% of models cast in the Fall 2016 season were people of color. While brands may have started to include a more diverse range of models, there is a big difference in presenting diverse models styled in a Euro-centric way (e.g., straight wigs and extensions) versus giving them the license to wear their hair naturally. I applaud Victoria’s Secret for not only embracing diverse models, but also embracing diverse hairstyles this year.

Victoria’s Secret has showcased some of the most well-known models in the last two decades including Tyra Banks, Gisele Bündchen, and Heidi Klum. The Victoria’s Secret Fashion Show is a premier fashion show considered by models such as Kendall Jenner to be a “dream come true.” By wearing their hair naturally during such an important show, Maria Borges, Herieth Paul, and Jourdana Phillips have made a striking statement to the world.

There has been a lot of discussion about wearing natural hair in the workplace, with some women even experiencing discrimination due to their hair styles. Many organizations and people still view wearing curls or natural hair in the workplace and at school as unprofessional, which is very discouraging. It took me a long time to feel comfortable wearing my natural curls at work in corporate America, so I find it empowering that these three models could wear their natural hair in their place of work, without being forced to conform to standards of beauty that don’t represent them.

When people think of Victoria’s Secret they typically think of long, flowing "beachy waves." Growing up I wouldn’t have been able to name one Victoria’s Secret model who had curly hair like me. These three models have shown that beauty comes in many forms and you don’t have to have straight hair or loose waves to be considered beautiful. While we already knew that hair does not have to be long or straight to be sexy, it's nice to see mainstream brands catching up.

When I did a big chop seven years ago, I was terribly nervous because it brought back bad memories of being asked if I was a boy when I was a child with super short hair. I don’t think I am alone in being incredibly encouraged by these models rocking their TWAs in a major fashion show. So much of our appearance is tied to our hair, and I am so appreciative of having these very visible examples for myself and the girls in my family.

This industry still has a long way to go, but seeing models confidently rock their natural hair for a mainstream brand is an important and positive step.

What are your thoughts on natural hair at the Victoria’s Secret Fashion Show this year? Let us know in the comments!