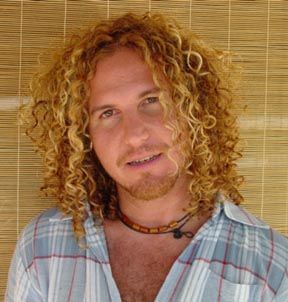 With a family full of curlyheads—and a glorious head of tawny curls himself—it's easy to see why Giacomo Forbes has a passion for curly hair.

'Curly hair is easy for me to understand—the shapes to cut, the products to use. the ways to style it,' says the tall, charismatic Austin hairstylist. 'It comes naturally to me.'

From the age of 5, Giacomo Forbes knew he wanted to cut and style hair. He quit school at 11. And at 12, the grandson of the head of the U.S. Embassy in Rome began apprenticing. When he was 15, he moved to the United States, working for star stylist Paul Mitchell.

Since then, Forbes has worked with some of the biggest names in hair—Pierre Michel, Frederic Fekkai and Jose Eber, to name a few—at some of the most prestigious salons in New York, Los Angeles, Washington, D.C. and Paris.

His client list has included celebrities such as Sarah Jessica Parker, Marissa Tomei, Emma Thompson, Elizabeth Taylor and Barbara Walters as well as Saudi princesses and some of the biggest names in the world of modeling. He's been featured in such publications as Vogue, Allure, Women's Wear Daily Marie Claire, Town & Country and In Style and has appeared on many television programs, such as MTV, Fashion Files, Ask E. Jean, etc. The Fox Morning Show 'Breakfast Time' featured him for years as a makeover and professional product expert to discuss the latest tips and trends.

At one time, he said his life wasn't unlike the movie 'Shampoo,' in which Warren Beatty portrayed a playboy hairstylist to the stars.

Forbes met his wife, model Jennifer Hoover, at a Houston fashion show. Hoover, a native Texan, along with friends director Quentin Tarantino and actress Sandra Bullock, drew him to Austin.

Forbes says it wasn't a tough sell. He fell in love with the city's natural beauty and creative energy and felt it would be an ideal environment to raise their baby daughter Isabella -- now a 4-year-old curlyhead. After working at another Austin salon, he recently opened his own salon near downtown Austin, called Giacomo Forbes, on 12th Street. The smell of incense fills the cozy salon, which he designed himself, using Feng Shui principles.

An aromatherapist by nature, having grown up in Italian olive oil vineyards, Forbes has been involved with product development for some of the nation's top haircare manufacturers. With the help of plastic surgeon Robert Clements, Forbes recently developed a line of products called Organic Miracles.

The all-natural, all-organic line, which doesn't use animal testing, includes his Miracle Hair Oil and Dry Hair Pomade as well as skincare products. The hair oil, which he describes as a 'wearable defrizzing treatment,' contains grapeseed oil ('One of the most miraculous things I've ever used'), hazelnut oil, honey, lavendar and oils of lemon, mandarin and grapefruit. It is formulated to revitalize the hair and protect it from environmental damage. The pomade, which contains grapeseed oil, beeswax, shea butter, coconut oil, essential oils of mandarin, grapefruit, tangerine, lemon and lavender controls frizz, adds shine and protects against styling damage. Neither product contains silicones.

'I am by far my best judge,' says Forbes, pointing to his own head of curls.