From the New York Observer, Sept. 2 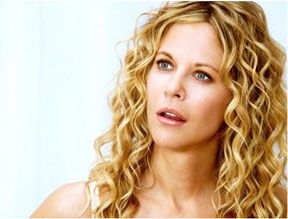 It’s an easy visual trick from Hollywoodland: a few adjustments in wardrobe, makeup and, most important, hair, and, voilà! Life’s good! Or, at least, getting better. Call it the The Princess Diaries effect, a film that seven years later still causes outrage — remember the first thing done to transform Anne Hathaway into appropriate-looking royalty? But why, many naturally curly-headed gals might be forgiven for wondering, does frizzled always equal frazzled? And how come a third-act makeover always seems to involve a flatiron?

“Meg and I talked about Mary, and the kind of differences between the original film — which was very cosmopolitan — and this one. Meg felt that Mary should be very earthy,” said Jonathan Hanousek, a celebrity stylist who was in charge of Ryan’s locks throughout the filming of The Women. “She wanted the sense that her appearance was not something she lingered on, and that her focus was devoted to her life and her daughter.”

Well, O.K., but as anyone who’s had to wake up with a tangled nest of curls could tell you, those gorgeous Botticelli tresses Ryan sports for the majority of the movie would certainly not have come easy. (“There was some time involved,” Hanousek admitted.) And besides, since when does having curly hair make one earthy? Neither have we found in our unscientific gatherings that curly hair necessarily translates to being unconcerned about one’s appearance, or more romantic, wild, creative, or crazy and lusty. (Oh, Glenn Close, your fine performance in 1987’s Fatal Attraction set back more than the 30-something single woman. Did you think about us naturally curly girls?

“It’s all about being groomed and in control, isn’t it,” said Kerry Warn, a veteran movie hair designer who has worked repeatedly with Nicole Kidman (who sadly has never returned to the glorious, counterintuitive head of spirals from her Dead Calm and Days of Thunder era), and recently designed the coiffures of all the actors on the upcoming Baz Luhrman film Australia. “What you see and perceive is many times unspoken,” he said, pointing out that by quickly using visual clues — like curly hair — an audience is able to make all sorts of quick inferences about who a person is and what they’re all about.

Hanousek said that he has many female friends with curly hair and that he thought it was the “ultimate in confidence and strength. I don’t perceive those women to be frazzled.” And yet, when it came time to make Meg’s character emerge triumphant from the fray, straight her hair went. “We had to show the passing of time,” he explained, pointing out that Ryan’s wardrobe also became sleeker. “It was just to signify that she had gotten her life under control.” Of course, a wrinkled shirt and curly hair shouldn’t necessarily give off the same impression (trust us, even if our shirt is perfectly ironed, our hair retains the same amount of wave.). So, chicken or egg: Is pop culture a mirror for our society’s straight-ist attitude toward hair, or is it helping to perpetuate it?

"I think it's an important issue. We’re bordering the line of almost becoming a myth that if you have straight hair you are more professional or appear to be more professional, and that’s truly not the case,” said Ouidad, a pioneer in the pro-curly-hair movement since 1984, author of Curl Talk, and owner of the tony 57th street eponymous salon.

Like Ouidad, curly hair guru and author Lorraine Massey, founder and co-owner of Devachan Salon & Departure Lounge (which has the impressively punny and popular No Poo hair care line), preaches to the naturally curly to try to embrace their ringlets rather than quell them. “This whole pathetic straightening religion … it’s modern-day slavery,” said Massey, who is a passionate believer in her cause. “Everyone is trying to hide from their heritage—it’s anthropological. It goes very deep.”

In early August, "Good Morning America" aired a segment about people’s perceptions of curly or straight hair. Reporter Taryn Winter Brill went curly and straight for a panel of five “regular” men, and then did the same for job recruiters. With her own naturally curly hair she received higher marks from the recruiters on intelligence, confidence and ability to articulate ideas clearly, though from the random dudes she did better with the blow-out. (We think the message is clear from both tests: go natural!)

“I’m seeing more curls and freedom,” said Ouidad. “We still have a lot to go, but it’s just incredible how much more there is available. Just by the products on the market, it’s apparent.’

“Hollywood will embrace this truth when the people that are behind it get it and then do what they can to reeducate the union stylists and designers,” said Devachan’s Harbinger. “This is something that we at Deva want to get involved with. It’s almost like the Democratic convention. We have to first undo years of lies, and then reeducate, motivate and guide them to the truth. The truth is that curlies can have ‘neat’ and refined curls if the people who tend to them know what they are doing. And this will in fact significantly change the perception from a false belief to a new understanding of the beauty of curly hair.”

We know, we know, this could take years. Still, we look forward to the day we see Gwyneth Paltrow on the big screen, hitting rock bottom both professionally and personally, getting made over (cue Sheryl Crow!) with a lion’s mane of curls and then being promoted to CEO and winning the man of her dreams. Then, and only then, will we know Hollywood has learned that curls don’t have to signify frazzle. They can dazzle, too.