In Case You Missed It... Sanaa Lathan Shaved Her Hair!

Sanaa Lathan surprised us all when she posted a video of herself on Instagram revealing her new-look. She captioned the video "#NappilyEverAfter."

Slowing revealing her face to the camera, Sanaa quickly says with a smile "I feel so light I can fly away."

Lathan's leading role in the Netflix original film Nappily Ever After is the origin of this new hairstyle changes. The movie is an adaptation of best-selling novel Nappily Ever After, the engaging story of an African American advertising executive, her relationships with herself, her hair and "her commitment-phobic boyfriend." This novel by Trisha R.Thomas is a definite must see for its ability to tackle real life scenarios and career defining moments.

With her new this new hairdo Lathan joins the bold shaved hair clan, including stars like True Blood actress Danai Gurira and Chewing Gum star Michaela Coel. And while Instagram comments were mostly acknowledging how powerful and empowering her new do is, others were not convinced.

The conversation quickly went to femininity, womanhood and the link with hair. Are you still feminine without hair? Is hair really just hair? Many commented that shaving their own heads would be impossible. It is clear that hair is still very much associated with beauty and womanhood. Many users commented "why ??" under the video, wondering how the actress could have consented to shave her beautiful locs for a movie role. But cutting your hair seems to be an experience dreaded by many women,"When it comes to hair, all women can relate. Whether you are white, black or Asian we all agonize over how to wear it; toss and turn about what colour it should be; and, cringe at the thought of cutting it too short" says Cheryl Thompson, author of Black Women and Identity: What's Hair Got to Do With It?. 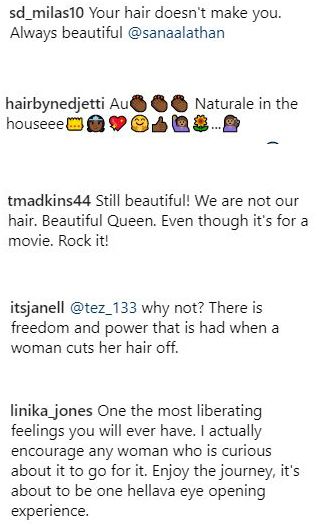 As a celebrity, Lathan's appearance, like most celebrities, is part of her brand, and is often dictated by society's beauty standards. 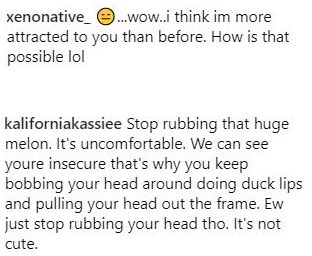 Do blondes really have more fun? Hmmm.. Let's see.The first of MANY hair changes for #Violet, my character in #NappilyEverAfter. Watch my #instastory to see the process!

The new hairstyle comes right after Sanaa posted her new blonde hair color last week. She actually teased this new shaved head moment saying "the first of many changes," but could we have predicted this in advance ?

We're so here for Sanaa's new look and the freedom she obviously feels since shaving it. We recently published this article Thinking of Shaving Your Head? Go Ahead and now Sanaa has given us one more reason and another source of inspiration!

What do you think of this new do? Would you ever shave your head?