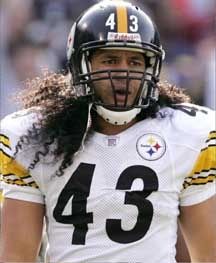 He is the NFL's Mane Man and many fans' favorite player in football. At USC, he was one of the Men of Troy. He is the Troy of men with Pittsburgh.

Polamalu, who starred in Sunday's Super Bowl against the Phoenix Cardinals, could star in the musical "Hair." Fans wear wigs to games honoring the Somoan. Cardinals fans don't do that for Fitzgerald.

"This is the end of the road, where you want to be, what you play for all year," Polamalu said. "Everybody talks about us needing to win to break the tie with the Cowboys and 49ers for most Super Bowl titles. That would be great. For me, though, I just want to get to 2-0 in the Super Bowl.''

Polamalu speaks so softly you would think somebody pushed the mute button on his TV remote control. He doesn't carry a big schtick. He's genuine as a natural pearl. He's nice as your favorite elementary-school teacher, as much a family man as George Bailey. It's a wonderful life.

Polamalu was born in Garden Grove, Calif., as Troy Aumua, but his mother, Suila Polamalu, raised her five children alone. All four of his siblings spent time in jail. Troy was fearful of the gangs and the drugs, and when his mother took him on a trip to Tenmile, Ore., to see relatives, the son begged her to let him remain behind.

Eventually, Suila returned to her native Samoa, and Polamalu was "raised by a community of relatives." Several played football. He became the best. At Southern Cal, Polamalu was an All-American, and the Steelers traded two draft choices so they could grab him 16th overall in 2003.

Polamalu, who once visited his mother's homeland and officially changed his name to honor her, understands his role on and off the field.

"There's a duty among all from different cultures, especially for pro athletes who are in the limelight, to be a good influence for young people. I try to be."

His air and his hair, and his football skill, are uniquely rare. 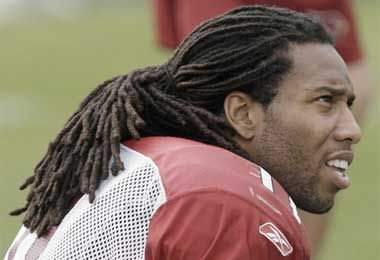 Polamalu-Fitzgerald. Who has the advantage on the field? Who cares.

Fitzgerald's dreadlocks are more tamed and under control than Polamalu's hair. Fitz usually wears his hair in a rubberband or hair tie, letting it droop from beneath his helmet as he dives to make spectacular catches.

Fitzgerald can be tackled by his hair legally, after the NFL deemed long hair part of the uniform. That's minus points for Fitz because it's gotta hurt having a 250-pound linebacker yanking on your hair trying to pull you down.

In a March 2006 NaturallyCurly article, we asked Polamalu about his hair:

"It's become like a fifth appendage to me," Polamalu said.

The fact that his hair stays in great condition despite his active lifestyle as a professional athlete is no accident. A few days before the big game, Polamalu talked about the routine he follows to keep his curls looking great — which includes some tips quite familiar to regular readers of NaturallyCurly.com.

Polamalu shampoos daily and conditions every other day. "When I condition, I make sure to comb the conditioner through it." Favorite product? Pantene's Hydrating Curls.

He's got the potential to be a product junkie. "As you know, you have to rotate your products and use different shampoos and conditioners," he said. Polamalu switches up every two weeks.

Polamalu doesn't seem to experience too many problems with tangles, which could be due to the fact that he rarely wears his hair loose when he's not playing football.

Off the field, he's a soft-spoken and introspective family man who'd rather spend a quiet night at home with his wife, Theodora, as opposed to the stereotypical wild life of a professional athlete.

Fitting of his off-field personality, the private Polamalu usually sports a ponytail or a bun.

Polamalu admits he didn't figure all of this out on his own. He credits Theodora, who also has a head of beautiful and healthy curly hair, with helping him find the right hair care regimen.

Oh, and in a statement that should forever endear him to many NaturallyCurly.com supporters, Polamalu said he's never had the desire to straighten his hair.