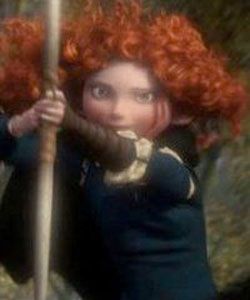 It was only a mere two years ago that Disney first ventured out and away from their typical white, straight-haired and, of course, helpless, princess with a black princess living in New Orleans. Of course, even then, straight-haired and helpless were still part of "The Princess and the Frog's" story line.

Pixar, on the other hand, has yet to release a movie featuring a woman as the main character. Sure, there have been great female characters, but none of them the heroine.

According to the synopsis of the film, “Merida is a skilled archer…determined to carve her own path in life,” showing that not only is she well-skilled in predominately male-attributed tasks, but that she is also independent and strong-willed.Fast forward to 2011. Disney and Pixar’s 5-year-old relationship has them seeking new heights, and their new heroine doesn’t come close to straight haired, helpless or male. Meet Merida, a young Scottish redhead with what us curlies might call 3B hair on a quest to find her own identity and finding true bravery on the way.

Of course, the luring question still remains: “How will this end?” The curly community has been excited in the past with lead roles such as Princess Mia in “The Princess Diaries,” who later had her curly locks straightened out to fit better in to a prime and proper society. Then, you have the ever-popular “Grease” in which in order to become a ‘rebel’ and be considered ‘bad,’ Sandy’s straight locks turn curly.

The curly community doesn’t need movies like the ones above, though, to remind them that curly hair comes with a preconceived notion of unruliness, rebellion and unprofessionalism, which is why it would be nice to finally see a movie where a heroine with curly hair stays natural and isn’t considered incorrigible, reckless or wild for doing so.

Yet, "Brave’s" synopsis goes further to say that “Merida’s actions inadvertently unleash chaos and fury in the kingdom" and that she must "undo a beastly curse before it’s too late.”

Hopefully this rhetoric won’t translate in to her curly hair being the issue and cause of the chaos. Of course, if it is, finding true bravery could very well mean finding and accepting herself and thus her curls.

Either way, “Brave” poses to inspire younger curlies to go naturally, be brave and embrace their unruly locks. As the old saying goes, it’s better late than never.

We can't wait to find out more about Merida when the movie is released next summer.