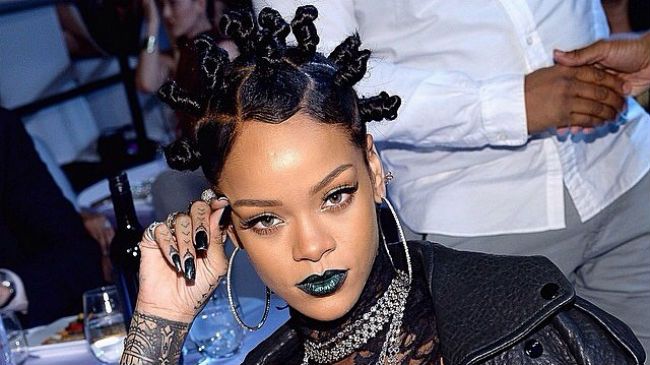 It's not much of a shock to us whenever rebellious Barbadian megastar Rihanna shows up somewhere with visually enticing hair, fashion, and make-up. The killer combo makes up what we adore about the edgy pop princess. But did she take her shock value a little too serious yesterday when she showed up at the iHeartRadio Music Awards rocking some bantu knots and captioned it on her Instagram page as "ghetto"?

Scrolling through the comment section of this photo (which to date already has 337,000 'likes') and noticed a number of the Rihanna Navy members a bit disappointed in the bad gal's poor choice of words to describe her look.

Bantu knots have long been a coveted style in the natural hair community. They are commonly used in overnight routines to preserve longer lasting, defined curly and coily styles. Bantu knots are often worn out in public as is, too. In our opinion, they are a fierce representation of the boldness displayed within the community to rock hair in its absolute natural state--unaffected, and unaltered. Referencing the negative connotation of urban poverty with a well-known urban hairstyle has absolutely no direct correlation. And, like Rihanna, people are voicing their opinions on social media.

In response to the caption on her picture calling herself "ghetto", one member said, "I wear my hair like this every night and now it's called ghetto and...supposedly ground-breaking? Yawn."

NEWS update: As of today (May 5, 2014) Rihanna's Instagram account has been deleted! Hmmm.. MTV sources are speculating it is because of her violations of the terms of service for the photo app--last week she posted nude photos from a recent magazine spread for Lui Magazine. But we noticed her unfollowers growing steadily since the "ghetto" remark.

Weigh in with your thoughts... What do you think happened? Has Rih taken her antics a bit too far for the public to consume?