Surfactants, Sulfates, and You

Curly hair can be considered as a precious cashmere sweater that requires the utmost gentle handling and care. Most of us are aware that our wavy and curly tresses have a tendency to be drier than other hair, and can be very fragile and delicate. For this reason, we have been urged to avoid using harsh detergents on our hair, with special cautions against using the “sulfates.”

This is rather sound advice with regard to a very small number of ingredients (that do happen to be quite pervasive in the formulations), but it is often oversimplified and extended to include other ingredients that can be useful in a haircare regimen. With that in mind, it may be useful and interesting to explore the nature of surfactants, and then specifically sulfate surfactants, how they differ from one another, and what effects these molecular differences can have on curly hair.

What is a surfactant?

In many surfactants such as sodium lauryl sulfate, the hydrophilic portion is found to exist on a terminal end of the molecule, and for this reason it is often referred to as the head group. The hydrophobic portion of these linear surfactant molecules is typically an alkyl or aryl containing chain, which is referred to as the tail group. (Figure 1)

Surfactant molecules are classified according to the ionic charge of the hydrophilic head group. These classes consist of anionic, cationic, nonionic, and zwitterionic surfactants. The most common anionic surfactants have a sulfate (such as SLS), sulfonate, phosphate, or carboxylate (soaps) functionality as the head group, while cationic surfactants are often tertiary or quaternary salts of alkyl amines (cetrimonium chloride). Ionic surfactants are available in salt form with an appropriate alkali metal or ammonium counterion (typically sodium or ammonium). 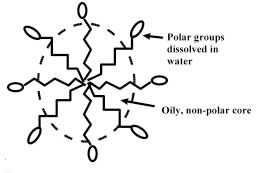 Figure 2. Illustration of a micelle

Sodium lauryl sulfate is probably the most commonly used anionic surfactant in the personal-care business. It is relatively inexpensive, foams quickly and is a fairly efficient cleanser. This molecule has 12 carbon atoms in its hydrophobic tail group and has a low critical micelle concentration, which means it has relatively good cleansing capabilities.

The downside is that it can be irritating to the skin, and as we have observed, can be quite harsh to delicate, dry hair. This is less the case when the formula which contains it has sufficient conditioning agents and co-surfactants present to minimize this effect). It has also acquired quite a reputation (primarily due to misinformation spread through the internet) for being a health hazard, but that topic shall have to be addressed another day.

Sodium laureth sulfate, which is a slightly larger molecule than SLS modified by the addition of ether groups, has the ability to form larger micelles and is consequently a more efficient and harsher cleanser. This is also true for ammonium lauryl sulfate, ammonium laureth sulfate, and sodium myristyl sulfate and sodium myreth sulfate. (*** please note that this is different information than I have previously provided. I am looking into it further, but SLES and ALES are less irritating to the skin and eyes, which has possibly allowed them to enjoy an erroneous reputation for being gentler to the hair as well).

Figure 3. Sodium lauryl sulfate (top figure) and sodium lauryl ether sulfate. The ammonium versions of these molecules have an NH4+ counterion in place of the sodium ion.

Sodium coco or cocoyl sulfate is sometimes seen on the labels of products wishing to market themselves as natural, gentle and luxurious. It is touted for being derived from coconut oil, which is true. It is typically a combination of sodium lauryl sulfate (usually around 50%) and sodium myristyl and palmityl sulfate (longer chain hydrocarbon tails). Although this is derived from coconut oil, it goes through a rigorous chemical reaction and purification process, and the result is a surfactant mixture that performs in the same manner as the ones derived from petrochemical feedstock sources.

Sulfosuccinates are another kind of sulfate surfactant seen in hair and skin-care products. These ingredients possess two hydrophobic tails, which is a very different molecular architecture than the straight-chain sulfates. Molecules of this type are not as efficient at packing into micelles and are very mild cleansing agents. For this reason, they are not excessively drying to the skin or hair and should not be of concern, even though they retain their status as "sulfates."

Magnesium sulfate, an ingredient often used as a curl enhancer in styling products, is not a surfactant but rather an inorganic crystalline compound. This material does not strip away moisture or oils from the hair or dry the hair in the same manner as a sulfate surfactant. It can create frizzy or dry-textured hair for some users, but for different reasons that shall be discussed in an upcoming article.

If a shampoo formulation were merely made up of water, surfactant and preservative, it might seem pretty cut and dried to avoid most of your sulfate-based surfactants. However, in most formulations, there are co-surfactants present, such as fatty alcohols, nonionic surfactants and amphoteric surfactants (cocamidropropyl betaine) — many of which help to reduce the drying tendency of the cleanser. Also, most formulations contain additives such as moisturizing oils and conditoning polymers that can help prevent damage to the hair. Additionally, the composition by weight of each component in the formulation is important to the overall performance of the product.

If you are attempting to avoid harsh shampoos, it is probably best to make sure you find a product that contains milder surfactants, lots of moisturizing agents, and little, if any of the linear chain sulfates. However, if you like to use them occasionally as I do, look for ones that have SLS or SLES lower down the ingredient list, and make sure the list contains other mild co-surfactants and moisturizing agents.