A Pill to Change Your Hair Texture 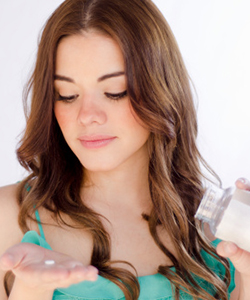 The conversation concerning the possibility of a pill that could change a person's natural hair texture has been a hot topic since 2007, when "The International Journal of Dermatology" published their findings that the texture and curl pattern of your hair depend on the shape of your follicle. According to the findings, people with hook-shaped follicles produce hair containing more kertain protein on one side, rather than evenly distributed, which causes the curl. Those with straight hair have a round follicle that coats the hair shaft evenly in keratin.

Following the 2007 publication, "The American Journal of Human Genetics" published a finding in 2009 suggesting that there may be a way to change the texture medically through gene therapy or a hormone treatment.

Beauty company L'Oreal Paris has staked the most claim on the findings, researching how the development of a pill to alter the shape of the hair follicle will further affect hair texture.

In 2010, the NaturallyCurly community caught on to the going ons of the pill research from an article in "Essence Magazine" suggesting that there is a "cure" for curly and coily hair in the works. Though neither L'Oreal Paris nor anyone behind the research has mentioned the pill as a "cure" for anything - the pill would potentially offer women the opportunity to try out other hair types without heat damage. Allowing women to switch between hair types simply by taking a pill would very likely prove to be an extremely profitable business model, and L'Oreal Paris is attempting to take hold of that niche.

A Long Way Off

Yet, here in 2013, the pill is nowhere near production and remains largely an idea or myth. In a blog question asked to "The New York Times" on May 13, 2013, the newspaper quotes Nick Martin, a professor at the Queensland Institute of Medical Research is Brisbane, Australia, saying that the pill is still "a long way" off.

Despite more than five years of findings and publications, as well as a piqued interest from one of hair care's largest brands, it's likely we won't see any hair texture changing pill anytime soon - if ever at all. The science behind exactly what causes curly versus straight hair is not an absolute one and what causes curls for one person may only be a small part of what causes them for another, meaning the pill wouldn't work for everyone.

This doesn't stop the heated debate, though, between women about whether or not they would take such a pill - testing to see if the grass really is greener. If the pill allowed for an easy transition from straight to curly or curly to straight and then back again to your natural texture, many feel that it would be worth a shot. However, as with many hair texture altering methods, it's likely that your natural texture will never be the same - big chop or not.

Would you pop a pill to change your hair texture?