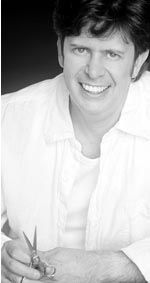 The veteran Canadian hairdresser admits that the layered cut he gave her looked terrible. But after that mistep, he made it his mission to figure out how to work with curly hair.

Over the years, he has become a student of everything curly. He has studied how curly hair looks when it's wet and dry, how it shrinks and what makes it frizz. He has discovered the best ways to reduce bulk. He has watched how it changes from season to season. And he has learned that no two people have exactly the same curl types.

Torch even developed his own curly hair care line, Curly Hair Solutions, to address the needs of this special hair type.

Thousands of curly clients later, Torch says he's taking the biggest leap of his career. This month, he'll be closing his Cutting Crew Salon and opening the new 2,000-square-foot Jonathan Torch Curly Hair Institute in the North York area of Toronto. While the Cutting Crew worked with all hair types, the new salon will focus on curly hair.

The Institute also will serve as a training facility for other hairdressers to learn how to work with curly hair. It will have 10 stations, a classroom and a photo studio.

Torch says he doesn't advocate one method of cutting curly hair, but likes to use a combination of techniques, depending on the hair type. For example, he might use the tunnel cut to remove bulk. He has techniques that frame the face without cutting short pieces.

He has learned how to teach his clients to to create perfect ringlets with the 'skip curl' technique, which involves taking section of hair, twisting it around the finger and spinning it like a jump rope.

Since Torch believes the right products are essential to maximizing the potential of curly hair, the Institute will have a laboratory where he can develop new products for Curly Hair Solutions, which includes the popular Curl Keeper styling product. Torch says he's currently working on five new products.

Torch says he plans to add a spa to the facility next spring. Torch is confident in his decision to focus on curls. 'You see how it changes lives,' Torch says.