Walk into any salon, beauty supply or neighborhood store and you’re bombarded with products emblazoned with the “ion” label, including ionic blow dryers, flat irons, curling irons, conditioning treatments and even brushes!

Many products these days are labeled ionic, such as Bio Ionic's IonTherapy and a number of Chi products.

Many claim to transform your dry, frizzy flyaways into smoother, shinier locks. And since we’re always looking for new ways to battle frizz, many curlies buy into the ion craze. But is it just hype or do these ionic products really make a difference?

“The answer is, it depends on the product and the quality of the product,” says Ivan Hoot, director of education and training for Andis Co., which produces ionic dryers, flat irons and curling irons. “The biggest issue here is that there’s an awful lot out there for consumers to digest.”

And it all sounds so confusingly scientific. It helps to understand what an ion is — and why on earth manufacturers are urging us to put them in our hair!

Positive- and negative-charged ions are molecules that have added or lost an electrical charge, depending on the environment they’re in. We can’t see them, but ions exist in the air we breathe.

You know that amazing feeling you get when you’re breathing fresh air in the mountains or on the beach? The air in these pristine environments is packed with negative ions that are calming and soothing. At the same time, urban living has polluted air that’s full of positive ions — and those aren’t so good for you, or your curly locks.

“The ions in our hair, skin and nails are positively charged," says Woody Michleb, Artistic Director for Farouk Systems. "If you’re drying your hair with a regular blowdryer it pushes out positive charges, which cause the cuticle covering the hair shaft to open, and this translates to frizzy, dry, hair. Ionic tools, such as irons and blowdryers emit negative charges, which calm down the outer layer of the hair and make the hair appear shinier and more manageable.”

Not everyone is buying into the ion craze. Stylist Ethan Shaw of Anne Kelso Salon in Austin, Texas, says he tested ionic dryers when they first came out several years ago. He was not impressed.

“We soaked a mannequin head in water, towel dried it, and then dried it as fast as we could with an ionic dryer," Shaw says. "We then repeated the experiment with a conventional dryer. In our test, the hair looked exactly the same after we dried it with each dryer, and the ionic one actually took a minute longer to dry the hair. It was hard to believe the ionic label was anything other than excellent marketing. I've found the same thing with everything else I've seen that has the ionic label. I would love to see an ionic shampoo or conditioner that actually does something that others can't, but I haven't seen it yet.”

Ironically, Shaw uses an ionic dryer now, but only because it's hard to find one that isn't ionic. He says he still can’t see any difference in results, whether the ion switch is on or off.

Meanwhile, Hoot warns that not all ionic dryers are the same, despite their similar claims. For example, he says an ionic generator in the barrel of a blow dryer -- the technology Andes uses -- is going to produce a greater amount of these charged ions than an ion-charged component in the air stream, such as a front grill or a ring in the barrel.

“Ionic technology, when and where it is good-performing technology, truly provides a benefit. I think ionic is here for quite some time," Hoot explains. 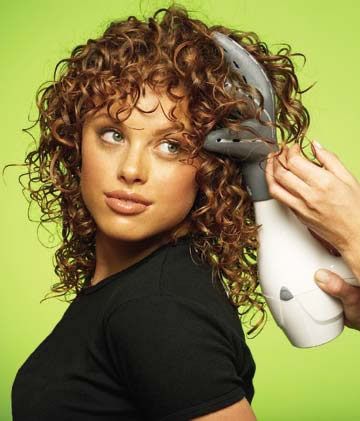 So does Jonathan Torch of Toronto’s Curly Hair Institute. Although Torch says he has yet to see ions add any real benefit to the condition of the hair, he acknowledges that ionic blow dryers do speed up drying time.

“The ionic technology in a blow dryer breaks down the water molecules much quicker than a regular blow dryer,” Torch says. “That is what I take advantage of.”

“You’re not relying on the heat source to dry the hair," explains Shari Harbinger, a partner at Devachan Salon. "You’re relying on an ionic generator, which has the power to actually evaporate the water molecules so you don’t necessarily have to set the heat so high. By keeping the heat setting lower at 275 and using the ionic technology, you’re not only drying the hair faster but you’re not expanding the outer layer of the hair, the cuticle, from the heat, which would then give the appearance of frizzy, lackluster hair. Instead you’re getting a very closed cuticle and a very shiny curly hair.”

As thermal tools have gotten better, more options are available that are less damaging to the hair, adds Hoot.

“For instance, someone with naturally curly hair can wear it curly one day, blow it straight the next day and wear it curly again the day after that," Hoot says. "But if you choose to chemically relax your hair, you’re eliminating options and accepting the chemical damage that might come with it.”

And once your hair is severely damaged, Hoot says all the features and benefits of ionic products won’t magically fix it.

“There are a lot of variables that come into play -- from the consumer’s ability to use the tool to the general condition of their hair to begin with," he says.

And although curl expert Christo, of New York’s Christo Fifth Avenue salon, is skeptical of some ionic products, he believes in the effectiveness of negatives ions. His Curlisto Ion Treatment is an in-house conditioning treatment packed with negative ions. He still cautions curlies not to expect too much from any one ingredient.

“It’s not a quick fix -- it takes time,” Christo says. “It’s not going to instantly turn your hair from being very dry or frizzy to a beautiful, silky hair. The ion treatment jump starts the hair, and then you follow up with a hair masque.”

Some manufacturers are strictly devoted to ionic products, like Nelson Chan, founder of I.S.H. Rescue. He manufactures a line of shampoo and conditioning treatments with negative ions that come from pulverized volcanic rock.

“The negative ions are in the rock and they grind them,” Chan says. “We also use crystalized jojoba so as the ionic process is closing up the cuticle, moisture is put back in the hair. Curly hair is basically the driest hair type, so by closing out the cuticle with ionic products it helps provide a smoother curl.”

Stanley of New York’s Christopher Stanley Salon agrees, although he says he’s found only one ionic product to rave about. He's tried ionic blow dryers, irons and brushes, and the one that really stood out was the Mebco Pro Spin Ionic brush.

"Whether I’m blowing hair straight or creating soft, loopy curls, it immediately gets rid of frizz and it’s cheap!” Stanley says.”It’s great for blowouts because you don’t have to use a ton of product or go over and over the hair.”

As for the ionic craze, Stanley says it's becoming “outrageous.”

“Do you really want to spend $300 on a blow dryer?" he says. "I say buy a cheaper hair dryer and go have a cocktail!”