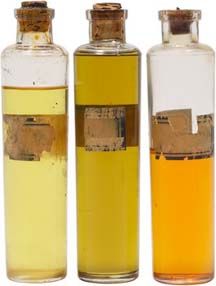 NaturallyCurly is celebrating its 15th Anniversary this year. To show you how far we've come, we're highlighting a few of your favorite articles from the NaturallyCurly archives!

Natural oils have been used for thousands of years by humans to soothe skin, smooth hair, provide medicinal benefits, to enhance cooking and supplement nutrition. In this day of technology and laboratory-synthesized ingredients, it is often easy to overlook or underestimate these marvels of nature. Natural oils are mixtures of chemical compounds, often quite remarkable in their degree of complexity and in the functions performed by each constituent identified as a component of the oil. The exact proportions of each different molecular structure in any particular natural oil often varies by its location of origin, as well as the process used for extracting the oil from the plant, tree, seed, or animal.

Natural oils are composed of esters, which are known for their emolliency, fatty acids, which are excellent conditioning agents, triglycerides, and fatty alcohols. All of these materials are inherently insoluble in water. However, a few of the natural oils contain high amounts of dissolved water in their natural state, accomplished by some of the chemical components acting as emulsifiers. For this reason, some natural oils are used as water-in-oil emulsifiers in products that are extremely heavy and creamy, such as hand creams and heavy hair creams. Although they are not water soluble, most natural oils should remove fairly easily from the hair if one uses a mild shampoo or a conditioner with emulsifying oils in its ingredients.

Not only are natural oils excellent emollients (definition: soothing, smoothing, capable of holding in moisture), but they can act as sunscreens, cleansers, protectors, and nourishing agents for our scalps, skin, and hair. They form films on the surface of the hair or skin and act as a barrier to the environment and hold in moisture. They can provide antimicrobial benefits to products used on skin and hair as well.

As there are many, many natural oils and it would be impossible to do a comprehensive survey of them in the space we have allotted for this discussion, this article will only examine a few common natural oils used in hair care products. Most of these will be vegetable-based oils, with one being an animal-derived product.

Lanolin is an oily material produced by the sebaceous glands of sheep. As it is a byproduct of wool-gathering and refining, it is fairly easily obtained without having to harm the animal (unless the sheep has a phobia about being shaved) and is a renewable resource. This has made lanolin a popular ingredient in skin creams and hair products for many centuries. Many consider animal oils to be more compatible with human skin and hair than vegetable or mineral oils. Lanolin has received some bad press, resulting from a very small study among allergy patients, indicating that it may cause allergic reaction in a small percentage of users. However, when one delves deeper into the literature, it becomes apparent that this has not been consistently borne out in other studies.

Lanolin is a mixture of fatty acids and wax esters, diesters and hydroxy esters of high molecular weight, as well as fatty alcohols (33 different alcohols and 36 different fatty acids alone have been identified as being present in lanolin). In its natural state, lanolin contains about 25-30% water, by weight. When applied to skin or hair, it is very effective at helping retain moisture. It forms very stable water-in-oil emulsions and can be used as an emulsion stabilizer and dispersing agent in creamy formulas. It can also be chemically modified to enhance its ability at stabilizing emulsions. Many different modified forms of lanolin are approved for use in hair care and skin care products. Acetylated lanolin, PEG-75 lanolate and hydrogenated lanolin are some examples.Lanolin is considered by many to be too thick and greasy to be used in very high concentrations on hair, as it would weigh down the curls. However, some users who have very fine, dry and extremely curly hair have reported it to be very beneficial to their hair.

Shea butter is a fatty substance extracted from the seed of the shea tree (Karite tree). It is a highly complex mixture of fatty acids, esters, triterpenic alcohols, and cinnamates. It contains vitamins A and E (tocopherol). The cinnamates in shea butter absorb UV radiation which is extremely useful in skin care applications and for color preservation in hair products. The fatty acids in shea butter are in the range of fourteen to twenty carbons per chain, which is slightly higher on average than the composition of coconut oil. This makes shea butter a creamier, heavier moisturizer, highly esteemed for its ability to provide great conditioning effects without being too heavy. Read more about shea butter here.

Jojoba is a unique natural oil from the jojoba plant. This material is distinct in that its composition is primarily straight-chain, monounsaturated esters, making it a liquid at room temperature. It is in the chemical category of “waxes” (as is lanolin) rather than oils and contains virtually no triglycerides. The majority of the esters present are much larger than in most natural oils, ranging from 38-44 carbons per ester. It is chemically very similar to oil from sperm whales, and has replaced those oils in products since the ban on commercial whaling in the 1970’s.

Jojoba oil is extremely lubricative (slippery), but not greasy. It is very thermally stable which is ideal for people who use heat styling frequently. It contains Vitamin E and antioxidants, which can help preserve the color and structural integrity of the hair. It also has been found to contain phospholipids, which are found naturally on human skin. Jojoba is extremely similar in make-up to human sebum, excreted by our sebaceous glands. As a result, it can dissolve sebum and help remove it from the skin and hair, keeping surfaces cleaner and shinier.

Olive oil is pressed from olives, and is made up mostly of fatty acid oils (triglycerides). Monounsaturated oils make up about 90% of the oils in olive oil, with polyunsaturated fatty acids comprising the remainder. It also contains some vitamins (A, E, D, K) as well as some antioxidants in the form of various polyphenols. Olive oil is one of the lighter oils, with its fatty acids being predominantly composed chains containing 16-22 carbon atoms. The lightweight nature of olive oil as well as its thermal stability due to its monounsaturated fatty acids make is a highly effective moisturizer for hair.

Almond oil is made up of the same fatty acids as olive oil, but is only 20-30% monounsaturated, in contrast to the 90% monounsaturation of olive oil. It is very lubricative and gives a nice slippery feel to the hair and is moisturizing, but is not as thermally stable as olive oil.

Castor oil is made up of hydroxylated fatty acids, which gives it some unique properties. The placement of a hydroxyl (oxygen-hydrogen) group near the double bond imparts additional oxidative stability to these molecules, making them thermally stable and capable of protecting the hair against the elements somewhat. However, it is very viscous and can be perceived as greasy on the hair. Some users have reported that it caused buildup on their hair as well.

Coconut oil is mainly fatty acid triglycerides in the range of twelve-to-eighteen- carbon chains. It is usually over 50% lauric acid (12 carbons). It is noted for being exceptionally light and non-greasy feeling, while still being very moisturizing. Palm kernel oil is similar in composition and properties to coconut oil.

Natural oils provide a lot of diversity in their benefits, all in one convenient package. It is difficult, if not impossible, to replicate this degree of complexity and delicacy in the laboratory. However, there are some drawbacks in using oils in formulations, such as the fact that there may be significant variability in composition, since they are derived from natural sources. For many of us this is not a concern, and we have found natural oils to be a wonderful tool for making our curly hair soft and shiny.