Playing it Straight: The Hidden Motivations 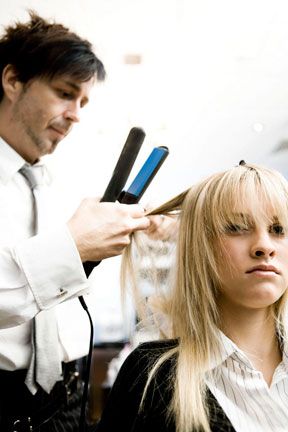 Ask any curly girl why she straightens her hair and you’ll likely hear the same reasons on the surface. She may want a change. Or she may just feel like it.

But what if those seemingly innocuous feelings actually reveal a deeper motivation? Could a straightening habit be more influenced by your personality than pop culture, or vice versa?

Our hairstyle, at least to some extent, represents who we are to the world. And psychologists say there is often much more going on inside our head than just changing what’s on top of it.

“There’s always an undercurrent that drives what you’re doing,” says Linda Leigh, who was a practicing psychologist for a dozen years before opening Hair In Vogue salon in Los Angeles, Calif. in 2004.

When making the decision to straighten your hair, Leigh says your subconscious thoughts about who you are and what you want in your life can play a hidden role.

“In projective psychological drawings, straight lines and straight hair suggest very assertive and decisive people who are persistent, ambitious, responsible, follow through on their actions, and want to be taken seriously,” says Leigh. “I think straight hair is associated with more masculine qualities of the self that women want to develop or are driven to develop.”

Logic, control and reason drive the so-called "adult" part of the personality, which Leigh says is linked to straight hair. And that need for control also intensifies as the amount of uncertainty increases in your life. Take the world we live in, for example. On any given day, we’re hearing about the stark implications of global warming, a volatile stock market, a housing slump that keeps on sliding, a war with Iraq that still isn’t resolved, and we also have to decide on a new president to help fix it all. 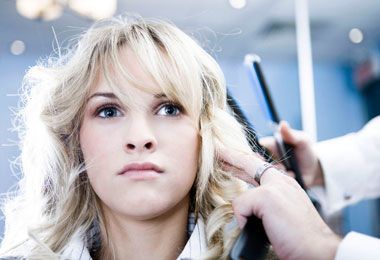 As a result, however, she says many women who play it straight may be sacrificing — rather than embracing — their femininity.

“Curly hair is associated more with the child part of the personality, one that is more spontaneous and feminine,” Leigh says. “Yet, taken to the extreme, it can lead to irrational and impulsive behavior, which is not usually linked to successful people. So, maybe someone who straightens their hair wants to get away from that. At the same time, becoming more reflective, creative and spontaneous are all beautiful qualities to embrace in one’s self that you get away from with straight hair, on an unconscious level."

Or, maybe it’s just not that deep, says Daniela Schreier, a licensed clinical psychologist and psychology professor at the Chicago School of Professional Psychology.

“The decision to straighten your hair can depend on the climate," Schreier says. "It can depend on what the people around you endorse and what is regarded as a sign of beauty. Pop culture influences us all day long, especially women. We covet what we see.”

Yes, many women do follow the style trends of the moment. It feels good to get your glam on, to fit in, and yet still find your own way in the crowd of coiffures. But even so, pop culture doesn’t always rule, according to Schreier.

Schreier suggests asking yourself pointed questions before reading too much into your hair-straightening habit.

“Do you think it’s worth it? Straightening can cost a lot of money. Is there anything else you would like to buy with that money?” Schreier asks. “Are you doing it for yourself or do you feel pushed toward straight hair because of society? If you do have a negative stereotype about yourself, then that’s something to work through. On the other hand, if you just want to look a little different or try something new, there’s nothing wrong with that.”

Meanwhile, Leigh also recommends paying close attention to your mane motivations. Are they healthy or unhealthy? Are you denying who you are, and rejecting curly hair is just part of that denial? Or, is straightening your hair a way to embrace an aspect of your personality you may have overlooked?

“Maybe you’ve been too child-like in your life. Maybe you’ve lived on impulses, whims and spur-of-the-moment decisions and haven’t been rational,” Leigh says. “Perhaps straightening is a healthy move for you to get in touch with the more rational part of yourself that can control your impulses and get what you want in your life.”

But if you’re, ahem, a bit too in touch with your controlling side, you may want to forgo the flat iron.

“In this case, I would not recommend straightening your hair," Leigh says. "It may be overemphasizing rigidity. And if one wants to actually embrace more of the creative aspects of the self, such as getting in touch with your dreams and ideas, that’s much more associated with the unconscious or child part of the mind, and that would be more on the side of curly hair.”

Another important question to consider is whether straightening your spirals really raises the beauty bar — or wrecks it.

“Are you forcing yourself to do something that doesn’t fit your face or body frame?” asks Leigh. “If you’re going to all the effort to straighten your hair and it’s looking worse, I would think something is driving that which isn’t healthy because there is a denial of reality. It’s a red flag.”

Bottom line? Having a stylishly healthy life — including your mind, body, spirit and hair — is all about balance. Leigh considers it a balance of the conscious and unconscious, the child and the adult, the masculine and feminine. Optimal health, she says, is found at the center of those extremes.

“If straightening your hair gives you harmony and peace, great," Leigh says. "If wearing it curly gives you that, so be it. Whatever makes you feel more harmonious and peaceful is really the guide to follow because that’s what leads to beauty.”