In keeping with my resolution to feature budget-friendly beauty in this economic climate, I decided to start with one of the largest cosmetics and personal care companies in the world — Avon.

As strange as this sounds, Avon started with one man, a door-to-door book salesman named David McConnell. He gave perfume that he made at home to women to entice them to buy his books; however, the perfume soon became the product he sold. The California Perfume Company was founded in New York City (!) in 1886 and the first “Avon Lady” was Mrs. P.F.E. Albee. A laboratory was established in Suffern, New York in 1887 and the company opened its Canadian presence in Montreal in 1914. 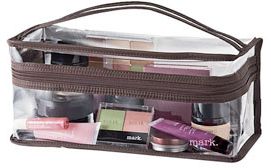 The company name was changed to Avon Products, Inc. in 1939, two years after the death of McConnell, and the “Avon Calling” campaign was introduced in 1954. Avon committed itself to corporate philanthropy in 1955, starting the Avon Foundation in order to make a difference in the lives of women. The focus of the foundation has been in three areas: breast cancer research, domestic violence and emergency relief.

To say that Avon’s products have evolved would be an understatement. I doubt McConnell would recognize the perfumes available from his company today. From the original single-note florals to Sweet Honesty and Soft Musk, fragrance offerings today include collaborations with fashion designers Christian Lacroix and Emmanuel Ungaro, in addition to celebrity-endorsed scents like Imari (Jennifer Hudson) and Unscripted (Patrick Dempsey).

The company branched out to offer color cosmetics in the early 1900s and today offers a dizzying array of shades in eye shadow, blush, pencils and lipsticks in cream and powder formulations. They have recently begun offering mineral makeup versions of their products, too.

Through their research arm, Avon invented waterproof mascara that washes off easily with soap and water as well as a huge range of skin-care products. Today, you can buy many products with skin-clearing properties like alpha-hydroxy acid, but it was Avon that first made these widely available almost 20 years ago in 1991. The Anew line was one of the first anti-aging lines of skin care products available, building on product lines like Avon Solutions and Clearskin. And Avon was the first major cosmetics company to end testing on animals back in 1989.

Over the years, the company has expanded their brand to include jewelry, clothing, giftware, housewares and soft furnishings, hair care, sunscreen products and lines directed at men and children.

I asked my own “Avon Lady”, Kelly Smith, why she decided to sell the products. She told me: "I (enjoy) the products/gifts etc. and it (is an) easy way to shop. It’s easy as it’s delivered to you and you make some good money on it. Avon is well-known so I don’t have to push it. People know the name, and it sells itself.

Avon bills itself as “the company for women”, and as their current television ad campaign states, it’s a way for you to be CEO of your own company.