Happy New Year. Or is it?

I know that this new year is going to be difficult from an economic standpoint for many of you reading this; the message boards are full of posts from members who have lost jobs themselves, or have family members in similar situations. Keeping that in mind, I’ll try to discuss beauty on a budget as much as possible this year.

But did you know that difficult economic times are often a boon for the beauty business? As strange as it sounds, when the economy goes down, cosmetics sales — particularly those of lipstick — go up. The online British financial blog "This is Money" reported in May that quarterly figures from makeup giants L’Oreal and The Lauder Group showed increases in sales, despite a drop in sales in other parts of department stores in the United States in that same quarter. Conventional wisdom holds that lipstick is a small indulgence that most of us can afford, even when our household budgets are being squeezed.

The term “Lipstick Index” to describe this phenomenon is attributed to Leonard Lauder, son of Estée and chairman of the board of the Lauder Corporation. He noticed that sales of lipstick by all brands that Lauder Corp. represents tended to increase during tough economic times.

While the Wall Street Journal found that makeup sales fell in the United States for the second and third quarters of 2008, during the last two recessions overall makeup sales rose by 4 percent and 10 percent respectively. The “lipstick index” may, however, be holding up in other countries. News.com.au reported in early December that it wasn’t only makeup sales going up Down Under. They found that sales of chocolate and alcohol were also increasing as the economy worsened. 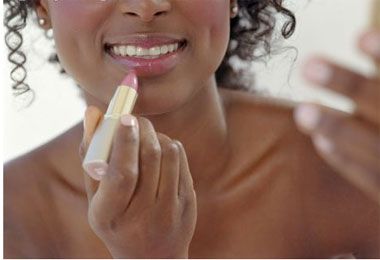 And the Avon of the rest of the world — Oriflame Cosmetics of Sweden — is expecting growth of 25 percent again this year. Oriflame is actively expanding in markets that won’t be affected as much by the North American recession, including Russia, China and India.

Another trend related to the Lipstick Index can be found in the color palette chosen by consumers: neutrals are the big sellers. A color that can be worn with everything is more practical than a statement color like deep red, fuschia or orange. See my July 2008 column “Into the Nude” for neutral lipstick suggestions.

If you have favorite colors of certain beauty products like NARS Orgasm blush or MAC Amberlights eye shadow, but can’t afford them, Milani Cosmetics makes duplicates of colors found in many high-end makeup lines. Try Luminous blush or Sun Goddess eye shadow. NYX and Wet ‘N Wild also attempt to duplicate the colors of more expensive lines. It’s up to you to decide if the color payoff and product formulations work for you.

One area not to skimp on is skin care. Clean, clear, healthy skin will make the cosmetics you use look that much better. Buy products on sale where possible, and look for coupons online. There are many sites with clippable coupons to take to the store or lists of online voucher codes.