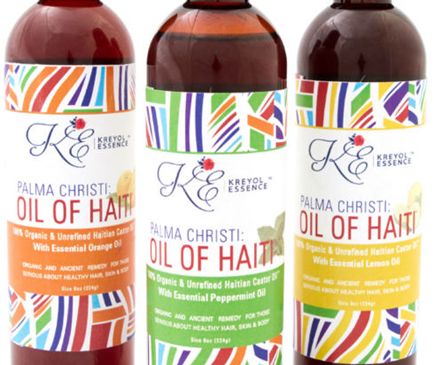 Jamaican Black Castor Oil (JBCO) is a staple among hair health enthusiasts. From summer growth challenges to sealing in moisture during the harsh winter months, JBCO is potent, prevalent and multipurpose. Recently, Haitian black castor oil (HBCO) has made its way onto the natural hair scene thanks to companies like Kreyol Essence and Okay. Because HBCO promises the same benefits as JBCO, many naturals have wondered what the difference is between the two.

In order to properly answer that, we have to delve into the history of castor oil.

The history of castor oil

Castor oil is derived from the Ricinus communis plant. Cold-pressed, solvent-extracted, or heat-extracted, castor oil has over 700 uses and has been an international commodity since the antiquities. Ancient Egyptians adored the castor bean, placing them alongside mummies in sarcophagi. Although called by many names (eg. ricino, castor, tártago, higuerilla, mamoneira, mamona, palma christi, higuereta) derivatives of Ricinus communis have been used, and are still used today, to treat every malady from hair shedding to angina. Castor oil is also used as a renewable biodiesel, rodent repellent, and polish!

Originating in Abyssinia, castor beans did not arrive in the Americas until the Portuguese brought slaves to Brazil.  Castor oil then traveled to Haiti in 1625 where it became the universal cure-all known as lwil maskriti. Although castor eventually made it to Jamaica, the British did not catch on to palma christi oil until 1764. Therefore, the tradition of using black castor oil is at least 100 years older in Haiti than it is in Jamaica.

The history of castor suggests that at a biological level all castor beans are the same, however, some are grown with pesticides and others are grown organically. Additionally, what differentiates castor oil products is the way the oil is extracted. Black castor oil as we know it, comes from beans that have been roasted, ground, boiled and heat extracted. The rich amber color comes from the roasting process. JBCO usually contains a greater amount of ash than HBCO does. Kreyol Essence in particular, strains their HBCO through a micromesh to remove any sediment or ash as they have not found evidence that the ash adds value.

Independent laboratory tests of one batch of castor oil from two leading brands showed that JBCO has .014% lower water content than HBCO and 10.27 higher saponification value, suggesting that JBCO is suited to soap-making. HBCO on the other hand, has 2.04% more ricinoleic acid and 3.27 more cenitgrams of Iodine per gram (an indicator of fatty acid saturation) suggesting it is ideal for hair and skin.

Finally, consider what brand you trust and the overall impact on the country of origin. Some brands have coopted “Jamaican Black Castor Oil” or “Haitian Black Castor Oil” when the oil is neither from the island nor extracted using traditional methods. Also, choosing HBCO or JBCO has the potential to positively impact the economy. For example, the United States imports all of its castor oil, so choosing authentic JBCO or HBCO promotes trade with that country. Kreyol Essence, for example, uses the demand for HBCO to employ farmers and women and plant trees in Haiti.

Regardless of your preference, castor oil is a history-rich staple for a reason and will continue to be so for thousands of years to come.

Have you tried HBCO?

This article was written by Chelsea Atkins.