Every curly head is different—so are the stylists who have built their career on cutting curls and kinks. Here, we uncover some unconventional curl-centric stylists who put their own creative twist on the curly cut. From cutting in the fourth dimension to feng shui hair, their unique approach stretches far beyond the traditional!

David Moreno sounds more like a sculptor than a stylist when he describes his curl-cutting technique.

“It’s like there’s this imaginary shape around the head and I have to fill it,” Moreno says. “The pieces of hair that don’t fit within the shape I see, I cut them away." Moreno says he approaches a haircut much in the same way one would sculpt a Bonsai tree. The Japanese miniaturized trees aren’t simply planted and left for nature to take its course. Each branch is artfully shaped or eliminated to create the desired image.

“You have to nurture a relationship with the Bonsai tree, and you create the shape of the tree with your interaction,” Moreno says. “I remove hair in the same artful way. It’s piece by piece, curl by curl. The idea is to control and influence the shape so you achieve your goal.”

It will likely take a few visits with Moreno to achieve the perfect head of curls he envisions.

“Rarely, is it ever the first time,” he says. “In the initial haircut, when I see the shape, I look for a curl that falls outside of the shape and I cut it. But just below, it may not reach the shape I envision, so I’ll let it grow in.”

Much like the Bonsai, Moreno says curly hair requires constant nurturing and patience.

“The shape is there,” Moreno says, “you just have to free it.”

Stylist Tamara Mooney loves curly hair. She wasn’t blessed with curls, but wanted them so much that at one point, she suffered severe breakage and uncontrollable frizz from three back-to-back perms. Since then, she came to understood the curly girl’s struggle and was determined to perfect her own curl-cutting technique. Mooney says all shapes are explained with math, and that’s what her “fourth dimension” cutting method is based on.

When you trim the perimeter or the outside of the hair, she says you’re working in the third dimension. And while it creates shape, Mooney says it’s still more of a hedge than a stylish head of hair. So, her cuts are in the fourth dimension, like “a haircut within a haircut.”

“Naturally curly hair will bunch up, so I cut in panel sections that are about the same size of the curl,” Mooney says. “For smaller curls, I might take smaller sections. If it’s wavy, I may take larger sections. In that fourth dimension, I still use elevation, over-direction and finger angles. But instead of just a wall of curls—which is weighed down and too bunchy—interior cutting releases the curl so it can spiral.” 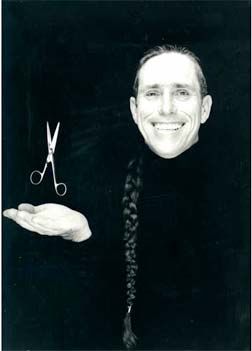 When you step into Michael Motorcycle’s salon, you receive much more than a haircut. Think spiritual experience.

“I read people’s inherited personality traits from the direction their hair grows,” says the holistic hairstylist, whose natural energy approach to cutting curly hair is inspired by ancient Chinese philosophy.

“I call it feng shui hair,” he says. “We feng shui the person. I help you find your soul.”

Clients are asked to arrive at the salon with their tresses already styled to look their best. Then, he observes their curls, the length of their neck, and the way their hair grows from the scalp.

“I also ask them how they feel about their hair and themselves,” he says. “Everything is connected.”

He also considers how their curls connect with their chakras, the body’s energy centers. For example, the brow chakra (next to your eyebrows) and the throat chakra (near the Adam’s apple).

“I’ll pull the curl down straight and see which chakra point it goes to,” he says.

And only then does he begin cutting. It’s a process that requires about three visits to achieve your look, according to Michael Motorcycle.

“We cut, you go home and experience it, work with it,” he explains. “You mark on the calendar when you like it and when you quit liking it. Then you return with those dates. It’s like getting a dress out of a bolt of fabric. It’s a metamorphosis.”

Like most curly girls, stylist Mia Fanali suffered through “every bad haircut imaginable” over the years. Yet, out of her frustration she developed a cutting method that results in curls that flow like a waterfall.

“I tried different techniques on friends and family with different hair textures,” Fanali says. “It was a process of elimination of what works and what doesn’t work.”

Whether locks are long or short, Fanali found that square layers never work on curly hair. She prefers round layers, mostly on long textured tresses, followed by texturizing techniques to remove bulkiness.

“Once I determine the perimeter and clean it up, I bring the hair out 90 degrees and do some texture cutting so when it falls, it looks like a waterfall of curls with no steps in the hair,” says Fanali, noting that her cuts always start technical - then there’s the freedom to get creative. “I’ll may do some fun things around the face if I think a person could tolerate a bang or shorter, fun pieces.”

For short hair, she may choose a transverse (or cross-wise) layer and then select random pieces to twist and cut—again to remove some of the excess weight.

“However, I get that waterfall could be different for each person, but it will be a waterfall when I’m done,” Fanali says. “That means the curl pattern will flow from top to bottom with no steps, no bells, and no triangles!” 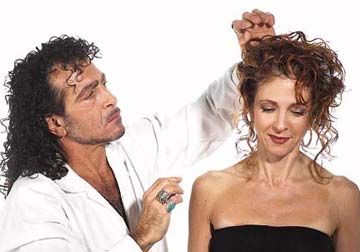 Stylists commonly look at facial features—like cheekbones and jaw lines—when they cut hair. Joseph Lentini delves deeper. After more than three decades of cutting countless curly heads, he created a “signacurl” cut based on how the bones of the head fit together, which determines how the hair will grow.

“When the flat bones of the head join together—from the forehead to the occipital bone—there’s a seam,” Lentini says, “and if you part the hair in a certain way, the seams appear. That’s what I’m looking for.”

Once he finds them and reveals the bone structure, he determines the shape of the cut. Examining how much hair is in each area, he then creates a look that best suits each curly head.

“It’s important to look at bone structure because if the haircut doesn’t follow that, even though the hair is telling you something, the head may be saying something entirely different,” Lentini says.

For example, if your head is really flat on the sides with weak curls there, he would need to create a strong foundation on the sides. That can’t happen if the hair is too long and weak to support the top, so he would then cut the sides of the hair a bit shorter.

“You have to start at the foundation,” he says. “When you cut hair with that much precision, it grows in the way it naturally would from the head. It grows in beautifully.”