How Chinese Schools Are Fighting Back Against Trendy Hairstyles 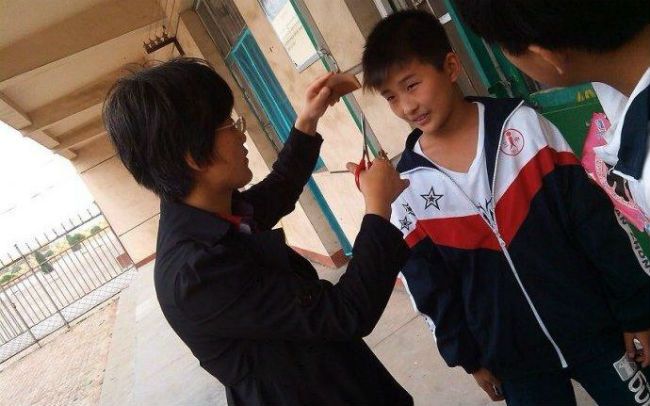 How far is too far?

Schools in The People's Republic of China are showing students they mean business. It has hired barbers to stand guard against trendy hairstyles in an effort to cut down these ‘hairy’ beasts in them name of preventing “negative social influence.” Got curly or blonde hair? You'll need a doctor's note to prove it or else it is getting chopped. Fashion-conscious Chinese students are being made to toe the line and adhere to a policy that forces girls to wear their hair longer than just below their ears while boys should sport either flat tops or crew cuts.

While I understand and appreciate the need to prevent distractions in learning environments, the idea of everyone being required to look the same is really freaking me out.

Modern day Chinese students are being heavily influenced by foreign hairstyles while exercising their teenage right to dye and fry their hair just like any other disastrous teenage rite of passage. Schools are having none of it; they don’t even care that attesting to a student’s legally blonde-ness or curly hair card is probably not the most productive use of a doctor’s time. They want their students to show up with the doctor's note as proof of their hair’s authenticity. The schools are so committed to avoiding the dangers of trendy hairstyles that if a student cannot afford a barber, one will be appointed to them. Consider it a hair-ing aid, if you will.

One school released the following statement through the Shaanxi News Website:

“A small number of students were found to be affected by the negative social influence of dyed and permed hair, which affects their comprehensive development. In order to create a positive and healthy learning environment for students, the school has ruled that boys should have crew cuts and girls should grow hair down to the ear, to ensure they can focus on their studies.

The rules at Xiamen Industrial and Commercial Tourism College, in China's south-eastern Fujian province, say boys' [sic] should have hair no longer than six millimetres in length, while girls are banned from having a fringe.”

Is there someone actually responsible for walking around and measuring the length of boys’ hair? And 6 mm? Seriously? How is a fringe distracting?

Students of the school are up in arms about the rules.

Some of them are even refusing to go to school or college in order to keep their trendy hairstyles. This strict set of rules is clearly having a negative social impact. Kids will be kids; they will try to explore and push boundaries, as growth and realization is a normal part of the developmental process. Things are never more appealing than when they are forbidden-- kids are likely to try a trendy hairstyle once, hate it, and never try it again.

As the mother of a little girl with beautiful kinky hair, I’m not sure that I can support a school deciding to give my child a haircut. I certainly wouldn’t appreciate if her school took it upon themselves to ‘groom’ my child’s hair to suit their rules. I would much rather be called first, then asked to take my child home and make whatever decisions I thought were in the best interest of my child. Here in the west, we are used to seeing black people being disadvantaged by these hairstyling rules and now, instead of racism, we see ageism playing a role in such an extreme reaction to trendy hairstyles. Perhaps, what the schools are really fighting is a perceived negative social influence of the west.

What are your thoughts?

Is the school taking it too far? Let us know in the comment section below.